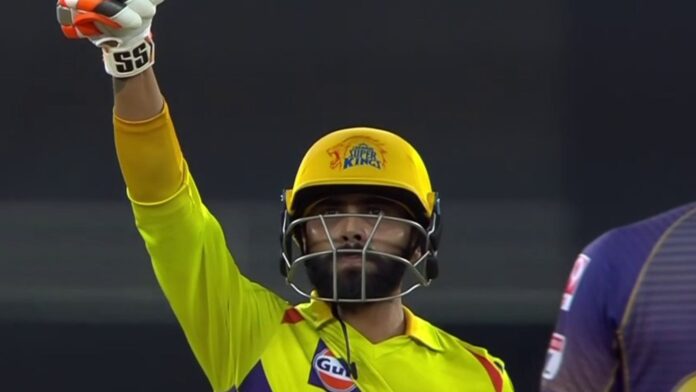 But Jadeja proceeded to smoke Nagarkoti over deep midwicket and wide long-on, having initially brought Chennai back into a fluctuating contest by smashing Lockie Ferguson’s 19th over for 20.

Chennai made it back-to-back wins and left KKR’s top-four hopes in huge jeopardy with a victory that also ensured current table toppers Mumbai Indians are guaranteed a place in the knockout stages.

Fifth-placed Kolkata must win their final group game against Rajasthan Royals on Sunday and hope other results go their way, with their inferior run rate leaving them likely to miss out.

Chennai have missed out on the play-offs for the first time in their history but will be buoyed by the form of Ruturaj Gaikwad, who made it successive fifties with his 72 from 53 balls against KKR, having struck an unbeaten 65 against another side in the top-four mix, RCB, on Sunday.

Gaikwad’s dismissal late on meant Chennai had slipped from 118-1 in the 14th over to 140-4 in the 18th but Jadeja’s onslaught, alongside Sam Curran (13no), took Chennai over the line, meaning Nitish Rana’s IPL-best 87 from 61 balls came in vain for Kolkata.

However, he ignited after that milestone with three sixes in as many deliveries off leg-spinner Karn Sharma as Kolkata smote 66 from the last five overs.

The left-hander shared a 53-run opening stand with Shubman Gill (26) and bossed a 44-run partnership with skipper Eoin Morgan (15) after Kolkata were inserted by Chennai.

Rana clubbed four sixes in total but departed looking for a fifth as Curran – who registered figures of 0-21 from his three overs – took a swirling catch off Lungi Ngidi (2-34).

Rana had continued to impress in the middle overs while Chennai strangled the scoring rate and his team-mates Gill, Sunil Narine (7) and Rinku Singh (11) fell to spin.

Rana exited at the start of the 18th over but Morgan and Dinesh Karthik (21no off 10) ensured Kolkata plundered 35 runs from that point, although Morgan did fall to Ngidi in the final over.

Chennai played spoiler, though, with Gaikwad dominating an opening partnership of 50 with Shane Watson (14), adding 68 with the enterprising Ambati Rayudu (38 off 20), and playing some gorgeous shots, with the highlight a six over long-off off the back foot.

CSK stumbled once Rayudu swatted Pat Cummins to mid-off midway through the 14th over and fell to 121-3 when Varun Chakravarthy bowled MS Dhoni (1) leg stump.

That should have been 121-4 only for Chakravarthy to spill a routine return catch that would have removed England all-rounder Curran for a two-ball duck two balls after Dhoni’s dismissal.

Kolkata still looked set to win, though, with Chennai requiring 30 from 12 balls but Jadeja took Ferguson apart at the backend of the penultimate over with two fours as well as a six off a free hit – the high full toss that led to the free hit was also pulled away for three by Jadeja.

That left 10 needed from the final over and Jadeja, eventually, sealed the win with successive monster hits over the leg-side before celebrating with a thumbs up.

Watch every match of the 2020 IPL live on Sky Sports Cricket. Kings XI Punjab vs Rajasthan Royals is Friday’s match with coverage from Abu Dhabi beginning at 1.50pm.

You can catch hour-long highlights of each game every weekday at 8pm and then at 7pm and 8pm on double-header weekends.

You can also watch The IPL Cricket Show on Fridays at 6pm on Sky Sports Cricket, with the show later available to download as a podcast. This week’s guest is England and Chennai all-rounder Sam Curran.

MSC Bellissima set to return in Japan next spring