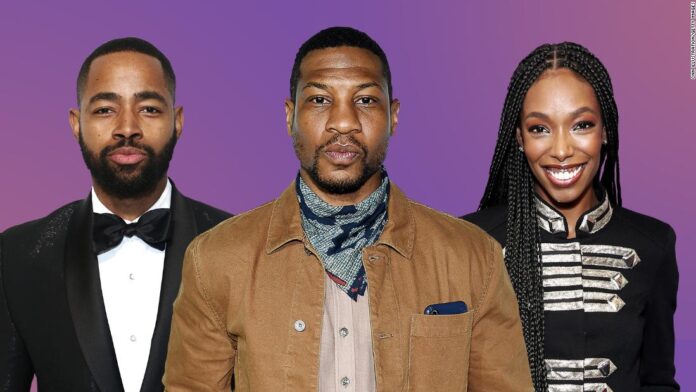 Historically, the Black character — because it seems there is hardly ever more than one — has so often been killed off first that it’s a cliche. That may be changing.
Rarely has there been a time in the horror genre with more content created by and starring people of color. Hulu’s “Bad Hair,” a new satirical horror film starring Elle Lorraine, in which a Black woman’s weave is to be feared, is just one example of improved inclusion in the genre.
More from Pop Life Chronicles
“We’ve entered a golden age of Black horror storytelling, where Black characters are front and center and the real monster often is racism,” my CNN colleague John Blake pointed out.
And we have not arrived here by accident.
This past year has taught us nothing if not that there is a need — and a demand — for more diversity in Hollywood. Creators of color know all about that. To wit …
Ihuoma Ofordire: She’s a screenwriter for the hit HBO series “Lovecraft Country,” which features Black characters set in the 1950s who are battling both racism and more traditional Hollywood monsters. (HBO is owned by CNN’s parent company.)
There has always been a community of Black horror and sci-fi geeks for whom the content resonates — and with good reason, Ofordire told CNN.
“Black people in America, we live in horror every day,” she said. “Racial horror, that we have to face and confront just by being ourselves.”
Ofordire wrote the “Lovecraft” episode that evoked the horrific historical 1955 murder of Chicago teen Emmett Till in Mississippi after a White woman claimed he had accosted her.
The episode has sparked Emmy buzz.
For inspiration, Ofordire carried a photo of Till’s mother in her writing notebook “so I can just remember her bravery,” she told CNN.
Building on history like that makes sense. What’s more, the show’s creator, Misha Green, was inspired in part by Beyoncé’s 2016 visual album, “Lemonade,” Ofordire said.
That’s more recent history, yes, but it’s proof that “intentional Blackness” is proving to be inspirational for today’s creators as well as weaving a collective narrative to offer a fuller picture of the Black experience.
Jay Ellis: This Black actor, best known for playing Lawrence on the HBO series “Insecure,” is working behind the scenes to do just that.
He launched in 2018 his production company Black Bar Mitzvah with partner Aaron Bergman “to champion emerging, underrepresented creators and storytellers who offer new perspectives on worlds we think we know.”
Ellis has produced his first film, “Black Box,” which is part of the “Welcome to the Blumhouse” slate of movies on Amazon.
In “Black Box,” a single father undergoes an experimental treatment that causes him to question who he really is after he loses his wife and his memory in a car accident.
With the challenging times we all have been living through, Ellis said, storytellers have to go the extra mile to bring the fright.
“There is something really interesting about how do you walk the line of like what is going on today, but also raising the stakes in a way where it feels like slightly more dangerous, slightly more action, slightly more scary, slightly more psychological,” he said.
“I think ‘Black Box’ kind of allows that because we’re playing with someone’s mind and what their expectations are and who they think they are in this world at this given time when we meet them.”
It almost feels like a twist on identity politics. Ellis also sees profundity in what’s happening right now in the horror film industry.
“So many people are getting opportunities to tell stories and stories that matter and stories that are purely for entertainment and stories that will be with us, you know, 50, 60, 70, 80 years from now,” he said. “And we’ll look at them and realize the gems they are and how culturally important they were.”
In other words, what is being produced right now is scary good.

Three things to watch:
‘Sarah Cooper: Everything’s Fine’
Many people may know her as the President Trump lip-synching sensation, but Sarah Cooper has had a bigger career than that.
The author and comedian tackles some contentious subjects including politics and race in her first Netflix comedy special.
“Sarah Cooper: Everything’s Fine” is currently streaming.
‘The Mandalorian’ Season 2
What we need right now is more Baby Yoda.
“The Mandalorian” is returning with a new season on Disney+, and you don’t even need to be a “Star Wars” fan to enjoy it — though it helps.
Season two starts streaming Friday.
‘The Undoing’
When it comes to this six-part miniseries, it’s having Nicole Kidman playing opposite Hugh Grant that does it for me.
Kidman is becoming the go-to person for HBO limited series adapted from novels, and this one is no different.
She plays a therapist married to a pediatric oncologist (played by Grant), and no one but no one portrays privilege quite like Kidman.
“The Undoing” is currently on HBO.
Two things to listen to:
He may be one of the elders of hip-hop, but Busta Rhymes has still got it.
His latest album, “Extinction Level Event 2: The Wrath of God,” drops on Friday. And while it’s the highly anticipated sequel to his 1998 project, “Extinction Level Event: The Final World Front,” it’s all the way current.
The guest lineup alone is worth it: Kendrick Lamar, Mariah Carey, Rapsody, Q-Tip, Anderson .Paak, Mary J. Blige and Chris Rock, to name just a few.
Epic dopeness.
A throwback from another genre also has new music coming out.
The rock band Goo Goo Dolls will release a new holiday album, “It’s Christmas All Over.”
Frontman John Rzeznik told my CNN colleague Chloe Melas they recorded the album in the spring.
“In my opinion, 2020 has been one of the worst years ever and I think a lot of people just need something to lift their spirits.” Rzeznik said. “I wanted it to be completely different from what people expected from us.”
The album is out Friday.
One thing to talk about:
Did anyone even ask for this “Saved by the Bell” reboot?
I know how much we love our nostalgia, but not everything needs a reboot, remake or a sequel.
Apparently, the memories of Bayside High have sustained many since the ’90s. Now Peacock is ringing the bell again with some members of the original cast.
It kind of reminds me of a star varsity quarterback well beyond his glory days still trying to relive high school.
Just let it go, Boo, I would say to him. We are so past it.
Besides, a reboot isn’t exactly nostalgia, it just trades on that old love.

I won’t even pretend to know what it feels like to lose a child, but Chrissy Teigen and John Legend’s recent tragedy has me learning about the sorrow and shame that surround pregnancy loss.
The internet can be a nasty, negative space. And there were some cruel criticisms surrounding the couple’s decision to share photos of their heartbreaking moments in the hospital as they bid their son Jack goodbye. (Teigen addressed her feelings about the photos in an essay published online.)
Thousands more on social media, however, rallied around the family with love, condolences and their own stories of loss.
Teigen shared her grief so that others wouldn’t be alone in theirs.
This is what it means to use your platform responsibly.
Pop back here next Thursday for all the latest entertainment happenings that matter.

How California prisoners raised $30K for a high school student in...