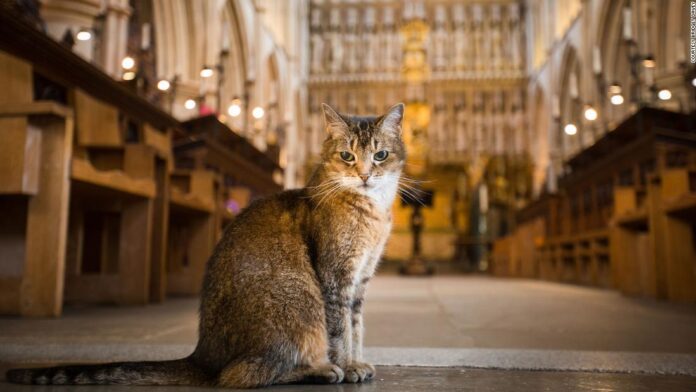 But in recent years the Gothic cathedral, which stands on the south bank of the River Thames, became known for another reason — the presence of a stray cat, affectionately named Doorkins Magnificat, who made the building her home for 12 years before passing away on September 30.
In an unusual move, Andrew Nunn, the Dean of Southwark Cathedral hosted a service of thanksgiving, which was live streamed on Wednesday.
“She was enormously popular and had a massive Twitter following — and was also the focus of a lot of people’s visits to the cathedral,” Nunn told CNN, adding that some people who could not have their own cat in central London even saw her as their own pet.
“When she died the response was huge, and we knew we had to do something — there was no way in which we could just ignore the fact — and why would you, we loved her, and she gave a lot to our life,” he said. “It felt entirely appropriate.”
Doorkins Magnificat — or Doorkins for short — made Southwark Cathedral her home in 2008 after visiting between Christmas and New Year in search of food.
Over the years, she became a common site at the church — whether sprawling across the pews, sauntering across the altar during a service, or catnapping in the hay of the nativity scene at Christmas time.

She was even present during a visit by Queen Elizabeth II in 2012, who she looked at nonchalantly before falling back to sleep — much to the Queen’s amusement, Nunn told CNN.
Last year, because she had become blind and deaf, Doorkins was moved into the home of the cathedral’s verger, a church official, who looked after her until she died peacefully.
On social media, many people thanked Nunn for the “wonderful” and “touching” service, and shared fond memories of Doorkins.
Presenter Kate Bottley said the service had allowed her to mourn her aunt, who died last month.
“I hadn’t cried yet, until today. I watched this and cried and cried and cried, because you know what? This wasn’t about a cat. It’s ok if you don’t get it, it’s ok if you think it’s silly, but for me this helped, it really helped,” she wrote on Twitter.
However, one bishop asked whether it was a joke, and labeled the service “insensitive,” given the coronavirus pandemic having made it hard for people to have proper funerals for loved ones.
Nunn told CNN he had “no regrets” about the service, and said he was taken aback by how many people had said they had wept watching the live stream.
“There’s such a lot of emotion around at the moment, and sometimes, something like that can just release it for people… It was heartwarming as well as emotional,” he said.
Doorkins reached people he couldn’t have done, Nunn added.
“I got used to the fact that she had more Twitter followers than I did — and that she brought more people to church than I will ever do,” Nunn added.
“People came in and they wouldn’t necessarily be churchgoers, but they’d come in to find the cat — and I think that they found themselves very welcome. Ending up in a sacred space and spending time with a cat was good for people.”