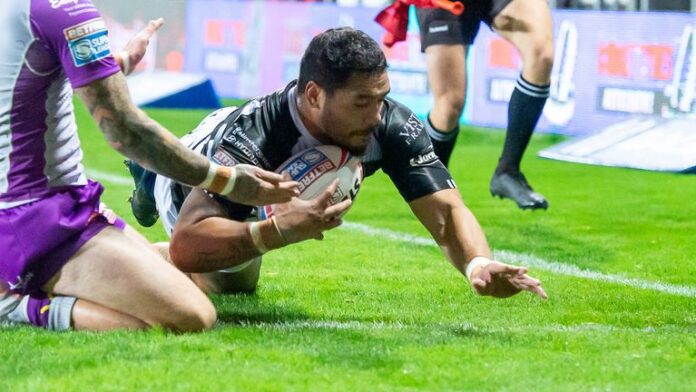 Hull FC maintained their late-season resurgence with a third straight win to keep alive their outside Super League play-off hopes, after a 31-16 derby win over Hull KR.

In contrast, it was a third defeat out of three for Rovers assistant coach David Hodgson, who could be forgiven for being grateful for the return of his boss Tony Smith from a period of self-isolation on Monday.

While Hull close the gap on fifth-placed Leeds, the Robins remain rooted to the foot of the table, four points adrift of Wakefield and with one hand on the dreaded wooden spoon.

It was a night to remember for Hull captain Danny Houghton, who broke Ned Rogers’ record of 32 derby appearances against the Robins, while Jake Connor marked his 100th appearance for the club in imperious fashion.

Connor absolutely revelled in the full-back role in the absence of the injured Jamie Shaul and had a hand or foot in four of his side’s tries to earn the man-of-the-match award.

Rovers created the first scoring opportunity only for winger Ben Crooks to be tackled into touch by his opposite number Naulago, and they fell behind when a barnstorming run from Faraimo set up the position for Joe Cator to get prop Josh Bowden charging over for the first try.

Faraimo scored the second try himself, racing onto a precision kick from Connor after 17 minutes, but Hull KR hit back each time to level the scores.

Former Hull FC loose forward Dean Hadley dummied his way over for the Robins’ first try while centre Kane Linnett took Jordan Abdull’s pass close to the line to crash over for the second.

Full-back Will Dagger added both conversions but the Black and Whites gained a grip on the contest with two further tries in the last 10 minutes of the first half, both fashioned by the impressive Connor.

The England international produced a cut-out pass for Naulago to cross at the corner for his first try and linked with Faraimo to get replacement forward Ligi Sao charging over for his side’s fourth try of the first half.

Marc Sneyd kicked his third goal to make it 22-12 and it took the Black and Whites just two minutes of the second half to extend their lead, Faraimo taking Connor’s pass to squeeze over at the corner for his second try.

Naulago matched his fellow winger’s effort after 65 minutes, taking Carlos Tuimavave’s pass to cross for his second try, and, although Sneyd could not add the conversion, he put over a drop goal three minutes later to put three scores between the teams.

Rovers were beaten but unbowed and added a third try 11 minutes from the end through Crooks after prop George King had been tackled inches short of the line.