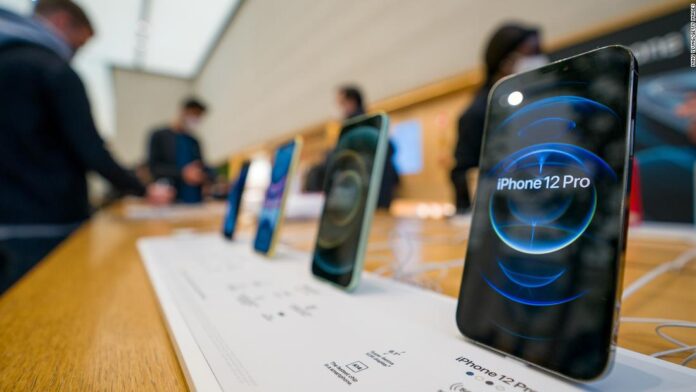 The iPhone maker on Thursday reported $64.7 billion in revenue during the quarter, up 1% from the same period last year, and $1 billion ahead of the revenue analysts had expected. Apple (AAPL) posted earnings of $0.73 per share, compared to analysts’ projected EPS of $0.70.
Despite the better-than-expected results, Apple’s stock fell more than 5% in after-hours trading Thursday.
Investors may be disappointed at the slowdown in sales growth from last quarter, when increased demand driven by the pandemic contributed to an 11% year-over-year revenue gain.
They may also have noted that iPhone sales declined 20% during the September quarter compared with the prior year. That is likely at least in part because this year’s September quarter did not include sales of the new iPhone 12, Apple’s highly anticipated 5G smartphone that launched earlier this month.
Last year’s September quarter sales number included the first 10 days’ worth of sales of the iPhone 11. But the iPhone 12 launch was delayed this year by the pandemic, so it didn’t go on sale until after the quarter had ended.
Because the quarter’s results didn’t include sales of the iPhone 12, which some analysts expect to generate a massive wave of upgrades, “I think in that sense you shouldn’t read too much into them,” said Tom Johnson, chief transformation officer at Mindshare Worldwide.
On a call with analysts Thursday afternoon, Apple CEO Tim Cook said that sales in the China market in particular were affected by the lack of a new iPhone during the September quarter. Sales in China fell nearly 29% during the three months.
However, Cook said business in China, a key market for Apple, is improving during the current quarter.
“Given initial data points that we see on iPhone 12 and 12 Pro,” Cook said, “we are confident that we will grow this quarter in China. We’re very bullish on what’s going on there.”
Still, Apple noted that international sales contributed 59% of the September quarter’s revenue.
The pandemic still appears to be benefiting other areas of Apple’s business. Revenue from its services segment grew more than 16% from the same quarter last year, to $14.5 billion, and sales from Mac grew 29% to $9 billion — both record highs, the company said.
Apple increasingly relies on services to drive revenue. Apple CFO Luca Maestri said on the call that the company now has more than 585 million paid subscriptions across all its services, up 135 million from a year ago. The company’s service bundle, Apple One, is set to launch Friday.
“Our outstanding September quarter performance concludes a remarkable fiscal year, where we established new all-time records for revenue, earnings per share, and free cash flow, in spite of an extremely volatile and challenging macro environment,” Maestri said in a statement.
The company declined to provide official revenue guidance for the current quarter, something investors were hoping for, the better to gauge demand for the new iPhone 12. Maestri cited “continued uncertainty around the world” in explaining the decision.
“Despite the strong iPad and Mac sales, iPhone revenue is down and the lack of guidance for the new iPhone 12 sales is not good news for Apple,” said Mindshare Worldwide’s Johnson
Maestri and Cook both said they’re “bullish” about iPhone 12 sales during the December quarter.
“Given the tremendously positive response (to the iPhone 12 lineup), we expect iPhone revenue to grow during the December quarter, despite shipping iPhone 12 and 12 Pro four weeks into the quarter, and iPhone 12 Mini and 12 Pro Max seven weeks into the quarter,” Maestri said. The company expects sales of all non-iPhone products, in aggregate, and services to grow by double digits, he added.
As for Cook, “we’ve got a once-in-a-decade opportunity with 5G, there’s a lot of excitement around 5G, and we’ve got some aggressive offers in the marketplace,” he said. “And so when I think about all of those, and I look at initial data points that we’ve got on the iPhone 12 and 12 Pro, we are off to a great start.”
Apple on Thursday also announced a cash dividend of $0.205 per share, to be paid out on Nov. 12 to anyone who held shares as of Nov. 9.