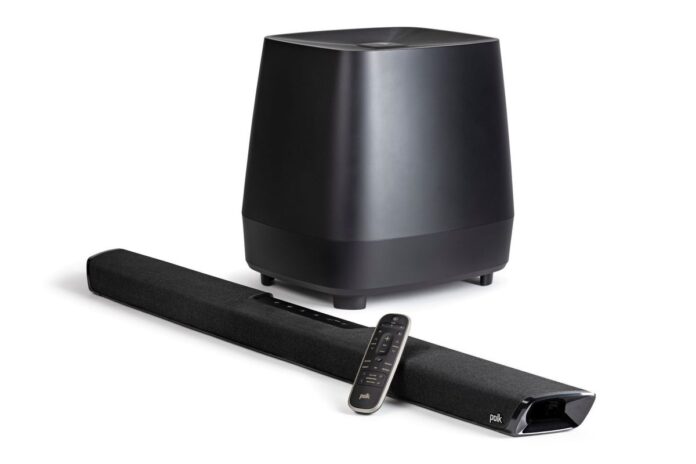 Polk Audio manages to tease some relatively impressive virtual 3D audio out of its 2.1-channel MagniFi soundbar, which makes the speaker’s subpar bass response all the more disappointing. Equipped with built-in Chromecast and Google Assistant support, the MagniFi 2 is easy to set up, and Polk Audio’s custom digital sound processing delivers subtle surround and height effects without undue harshness.

The $499 MagniFi 2 also comes with three HDMI inputs, a pleasant surprise for a soundbar in this price range. But while it’s unquestionably an upgrade over standard TV speakers, the MagniFi 2’s otherwise crisp audio is undermined by muddy bass from the wireless subwoofer, robbing the sound of punchiness.

This review is part of TechHive’s coverage of the best soundbars, where you’ll find reviews of competing products, plus a buyer’s guide to the features you should consider when shopping.

Polk Audio has three lines of soundbars. The budget Signa series includes soundbars that range in price from $129 for the 2.0-channel Signa Solo to $249 for the 2.1-channel, Chromecast-enabled Signa S3. The mid-range MagniFi line includes the MagniFi 2, which we’re reviewing here, along with the compact 2.1-channel MagniFi Mini ($299) and the 5.1-channel MagniFi MAX SR ($599), which comes with wireless surrounds and Chromecast support. Finally, the 2.1-channel Polk Audio Command Bar (which we’ve also reviewed) comes with onboard Alexa, complete with Alexa’s telltale halo light on top.

The Polk Audio MagniFi 2 is a 200-watt, 2.1-channel soundbar, with two oval-shaped 1 x 3-inch midrange drivers and one 0.75-inch tweeter for each of the left and center channels in the main unit, plus an 8-inch down-firing cone in the ported wireless subwoofer for low-frequency effects. Each driver gets its own dedicated Class-D amplifier.

Like other 2.1-channel soundbars, the MagniFi 2 lacks a dedicated center channel, which is typically reserved for dialog. Instead, the left and right channels combine to create a third, “phantom” center channel, a technique that can (depending on the quality of the soundbar’s audio processing) make dialog sound distractingly echo-y. We’ll evaluate the MagniFi 2’s audio quality a little later in our review.

The MagniFi 2 doesn’t support immersive 3D audio formats such as Dolby Atmos or DTS:X, nor does it come equipped with DTS Virtual:X, a popular sound mode that teases virtualized surround and height effects from as few as two drivers, without the need for either in-ceiling speakers or upfiring drivers that bounce audio off the ceiling. Instead, the MagniFi 2 boasts Polk Audio’s own SDA (Stereo Dimentional Array) audio processing and its new 3D audio mode, which allows the soundbar to deliver virtualized surround and height cues.

Virtualized 3D sound has its pros and cons. Unsurprisingly, you’ll hear more precise height cues from upfiring drivers that bounce sound off your ceiling, or—even better—height speakers that are installed in your ceiling. That said, not everyone wants to go through the hassle of installing in-ceiling speakers, and upfiring drivers won’t be effective if you have a vaulted ceiling or acoustic ceiling tiles. In those scenarios, a soundbar with a virtual 3D sound mode might be your best option. Again, we’ll assess the effectiveness of the MagniFi 2’s custom 3D audio mode in the performance section of our review.

Measuring about 37.5 x 3 x 2.1 inches (LxWxH), the fabric-covered MagniFi 2 is a tad narrower than the width of my 55-inch LG C9 OLED, and it’s just shy of the bottom edge of the LG’s low-slung screen. The 14.6 x 12.1 x 145-inch (LxWxH) subwoofer has a rounded rectangular design that tapers from bottom to top, a departure from the boxy-looking subwoofers that typically ship with soundbars.

The main MagniFi 2 soundbar unit can be either placed directly in front of your TV, or mounted on a wall below your TV. The soundbar comes with a mounting guide but no screws or brackets. I opted to simply put the MagniFi 2 in front of my OLED. The roughly 10-foot power cord comes in two segments, with a chunky AC brick in the middle (meaning no annoying wall wart), while the second segment terminates in a standard two-prong plug.

With the soundbar and subwoofer both powered up, it’s time to connect the MagniFi 2 to your home Wi-Fi network, which you can do with the Google Home app for iOS or Android (you’ll need to install it and sign in with your Google Account, if you haven’t already). Setting up a soundbar with Google Home is typically a painless process, and indeed, I immediately found a “Set up Polk MagniFi 2” banner on the app’s main screen. Tapping the banner steps you through the process of selecting your home wireless network.

Everything seemed to be going smoothly when, oddly, I got a “Something went wrong” error after the app had successfully connected the soundbar to my Wi-Fi router. Backing up and repeating the connecting process seemed to fix the problem, so it might have been a random hiccup, and the MagniFi 2 didn’t have any subsequent connectivity issues.

When it comes to connecting the MagniFi 2 to your TV, you have a coupe of options. First, you could plug all your video sources (such as a set-top box, a game console, and a Blu-ray player) into your TV’s HDMI inputs, and then connect the TV to the MagniFi 2 via the soundbar’s HDMI-ARC (short for Audio Return Channel) port. (A high-speed HDMI cable is included in the box, by the way.) It’s a convenient method if you already happen to have your video sources plugged directly into your TV, but the downside is that the MagniFi’s HDMI-ARC port doesn’t support eARC (‘enhanced” ARC), which allows the lossless Dolby TrueHD and DTS-HD Master Audio formats prized by Blu-ray aficionados. (Click here to read more about eARC.)

An alternative is connecting video sources into the MagniF 2i’s HDMI inputs, and luckily, there are three of them, a rarity for a $499 soundbar. Plugging a standard or UHD Blu-ray player into one of the MagniFi 2’s HDMI means you’ll be able to enjoy lossless audio, and the soundbar can pass 4K HDR video to your TV. Of course, the downside of connecting video sources through the MagniFi 2’s HDMI ports is that you won’t be able to pipe audio from smart TV apps through the soundbar; for that, you’ll have to go the HDMI-ARC way.

Besides HDMI connectors, the MagniFi 2 has an optical (Toslink) input that can support Dolby Digital (but not Dolby Digital Plus) audio, while a USB-C port is reserved for firmware updates.

On top of the main Polk Audio MagniFi 2 soundbar cabinet are buttons for power, input select, Bluetooth, mute, and volume up/down. On the front of the soundbar and peeking out from its fabric covering are 10 status LEDs that flash in different colors to indicate volume levels, detected audio signals (such as Dolby or DTS), Bluetooth pairing status, and more. Most of the LEDs go dark after a brief period of inactivity, and while a single audio mode LED does remain lit, it’s not bright enough to be distracting.

The MagniFi 2’s non-backlit remote is logically laid out (with the volume rocker in the center and the mute button just beneath), but many of the buttons are perfectly flat and edgeless, making them difficult to find in the dark. The good news is that the most important buttons, including the volume rocker, the power, mute, and input buttons, and the volume buttons for the optional (and not-yet-available) wireless surround speakers do have either tactile bumps or indentations. That said, the level buttons for bass response and voice boost (more on that in a moment), along with the audio modes and 3D buttons are all flat as a pancake, and I had to turn on my phone’s flashlight to find those buttons while watching a movie or a show.

While the MagniFi 2 is Wi-Fi-enabled, it lacks a dedicated mobile app for controlling playback tweaking its settings. You can take some measure of control using the Google Home app, but for the most part, the available settings (volume, speaker name, room, speaker group, and so on) are pretty much the same as they are for any Google smart speakers, which means no equalizer or discrete volume levels.

The Polk Audio MagniFi 2 comes with built-in Chromecast, which means you can “cast” audio to it from supported Chromecast-enabled apps such as Spotify, YouTube Music, Tidal, Deezer, Qobuz, and so on. You can also add the soundbar to a Google speaker group for multi-room audio, as well as designate it as the preferred audio playback speaker for, say, a Google Nest Mini or a Google hub. If your favorite music app (such as Apple Music) doesn’t support Chromecast, you can always stream tunes to the soundbar via Bluetooth 4.0.

Besides its Chromecast support, the MagniFi 2 also supports Google Assistant voice commands, but only to a limited degree. You can, for example, ask Google to play music on the MagniFi 2 as you would any Chromecast-enabled speaker (“Hey Google, play The Beatles on Polk Soundbar”) as well as control the volume and pause or resume the music. That said, a Polk rep told me that Google Assistant voice commands won’t work for soundbar functions on the MagniFi 2, which means you won’t be able to ask the Assistant to change video inputs or sound modes, and in my tests, asking Google to turn the soundbar on or off didn’t work, either. Still (and as I’ve said before), I don’t think it’s a dealbreaker for a soundbar to have iffy or no voice assistant support, given that it’s almost always easier to simply use the remote.

Levi’s Jeans Are Up to 60% Off Right Now, If You Know Where to Look