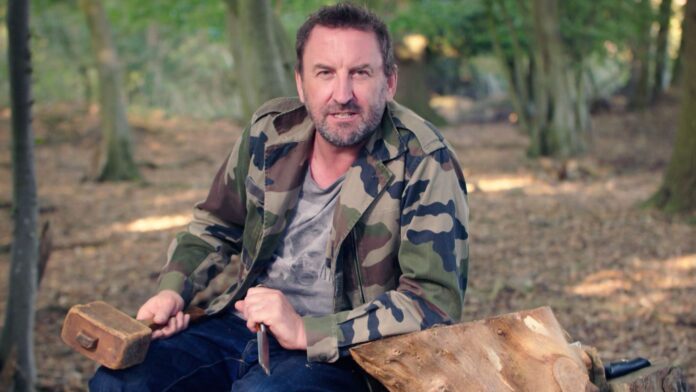 Sky History has axed its new woodworking show The Chop after producers said a contestant’s tattoos “could be connected to far-right ideologies”.

The reality show – which was in the style of The Great British Bake Off – was on the hunt for “Britain’s top woodworker”, and featured 10 contestants taking on challenges in Epping Forest, Essex. The first episode aired on 15 October.

Hosted by presenters Lee Mack and Rick Edwards, it had been due to air weekly on Thursday nights at 9pm, however no more episodes will be broadcast following controversy over contestant Darren Lumsden’s tattoos.

After promotional clips were released online featuring the heavily-inked Bristol carpenter, who goes by the nickname The Woodman, social media users pointed out that several numbers on his face and head had apparent links to white supremacy.

They include the number 88, which white supremacists use as a code for “Heil Hitler”, with the letter H being the eighth letter of the alphabet, according to the Anti-Defamation League (ADL).

The numbers 23 and 16 are also tattooed on the side of his head – a numeric symbol used by white supremacists to signify “white power”, referring to the position of the letters W and P in the alphabet, the ADL says.

Following an investigation, A&E Networks UK have pulled the show permanently, along with all social media clips featuring Mr Lumsden.

In a statement it said: “A contestant’s tattoos included symbols that could be connected to far-right ideologies and could cause offence; we sincerely apologise for that and we are sorry that our processes did not prompt further investigation at an earlier stage.

“The contestant continues to strenuously deny that he has, or ever had, far-right leanings. We are thoroughly reviewing our internal processes following the investigation. AETN UK and Sky History stand against racism and hate speech of all kinds.”

Following the move to pull the show, historian Dr Elizabeth Boyle from Maynooth University in Ireland told Sky News: “Sky History have made the right decision, although they should have done their due diligence before it got this far.

“I hope the controversy hasn’t caused too much distress for those most directly harmed by neo-Nazi rhetoric and ideology. We must all remain vigilant and active against the creeping normalisation of the far right.”

In a series of now deleted tweets ahead of the investigation, Sky History had denied the tattoos had any “political or ideological meaning”.

They said: “The production team carried out extensive background checks on all the woodworkers taking part in the show, that confirmed Darren has no affiliations or links to racist groups, views or comments.”

Posts went on to explain that the tattoos “denoted significant events” in Mr Lumsden’s life, including “the year of his father’s death” in 1988.

However, Mail Online claimed it had later spoken to Mr Lumsden’s father Trevor who told the website: “I’m alive and kicking, so I’m not dead yet.”

Mr Lumsden, a father-of-two from Portishead, has previously said he began getting his face and head inked around 10 years ago, and has worked with a tattooist on his look.