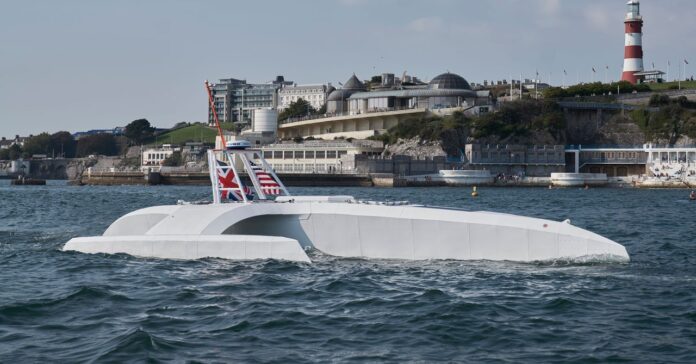 AI-driven tugboats and tenders are parking cargo ships, ferries that dock by themselves are moving cars and people across waterways, and soon small cargo ships will be hauling fertilizer and groceries around Scandinavian fjords with little or no crew. This maritime transformation is being led by advancements in AI and sensor technologies, as well as a general rethinking of how to move goods across the globe with fewer people to both save money and avoid the pandemic. Some ships are being retrofitted, some are being built from scratch, but it’s likely that smaller ones will be first to sea with AI at the helm.

These new seaborne systems are facing the same hurdles as autonomous vehicles—liability fears, uncertain regulations, and concerns about cybersecurity. At the same time, companies developing AI-based ships and navigation systems are seeing growing demand for their technology. Shippers want to avoid their cargo getting stranded at sea or in port because sailors have contracted the coronavirus. One marine executive said harbor pilots, the locally based navigators who steer big ships the final miles, are reluctant to board because of coronavirus risks. That is slowing down what used to be a routine procedure when massive ships enter crowded ports or treacherous river mouths.

For these commercial shippers, the near future is not a self-driving Uber, but more like a driver-assisted Tesla. They don’t expect AI to replace captains of larger ships, but to augment them.

“In the open sea, there are situations where the person is quite bored,” says Hendrik Busshoff, product manager for autonomy at Wärtsilä Voyages, a Helsinki-based maritime technology firm that is providing high-resolution radar equipment to the Mayflower project as well as several other autonomous ships.

“We may not remove the person from the ship, but we will remove them from the bridge and have them do more high-value work and call the person in when they are needed,” Busshoff says.

That kind of high-level planning by an AI-captain is being deployed today in Norway, where Kongsberg Maritime has built a 260-foot-long autonomous, zero-emissions ship called the Yara Birkeland.

When Kongsberg first began discussions with Norway-based global fertilizer giant Yara back in 2017, the plan was to build a completely unmanned vessel that could load, sail, and unload its cargo in between three Norwegian ports with no human intervention. But that changed after Kongsberg officials realized that they would have to convince Norwegian and international regulators to draft an entirely new set of rules to allow bigger ships like the Yara Birkeland to operate without a human captain on board.

“In 2017, there was no question that [our ships] were going to be unmanned,” says An-Magritt Tinlund Ryste, Kongsberg’s autonomy project manager. “But you also realize there are no rules and regulations, they are all based on having a human on board. You either need permission or you have to change the rule set.”

So Kongsberg shifted gears. After the hull of the Yara Birkeland was built in a Romanian shipyard and launched in February 2020, Kongsberg decided to add several crew members on the fertilizer transport vessel while keeping the autonomous systems. The humans would act as an insurance policy if something went wrong. The Yara Birkeland’s sea route would have replaced the 40,000 trips a year the company’s trucks make hauling fertilizer around the fjords by land, reducing both diesel pollution and making those rural roads safer. But the pandemic has delayed the ambitious project, according to an October 20 earnings call by Yara International CEO Svein Tore Holsether. “Given the complexity of Yara Birkeland and the need to get expertise in to support that, we decided to put that on a slower pace for a while,” Holsether told investors.