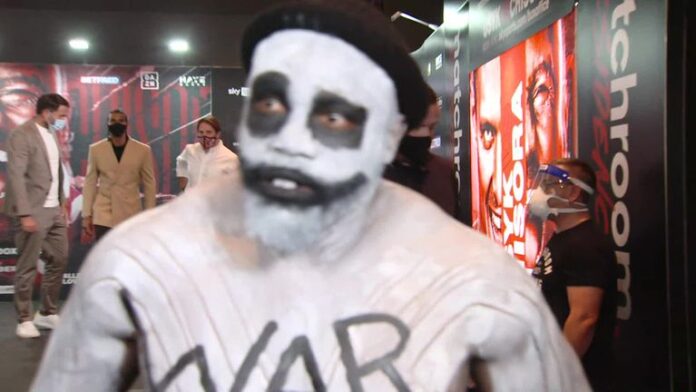 Derek Chisora’s former trainer David Coldwell: “One thing that stands out for me with Derek is how bad he has always wanted a fight with Usyk” – watch Usyk vs Chisora on Saturday, live on Sky Sports Box Office

The British heavyweight faces Usyk on Saturday night, live on Sky Sports Box Office, and trainer Coldwell knows both fighters well, having previously trained Chisora, while he also devised the tactics for Tony Bellew’s fight with the Ukrainian.

Chisora’s superior size and strength, along with his fearless attitude will pose a serious challenge, says the Sky Sports expert, but Coldwell has also offered insight into Usyk’s clever ring skills.

“I’ve said many times in the build-up to Oleksandr Usyk-Derek Chisora that this will be a classic boxer against brawler fight, and it has all the ingredients to be one of the best fights of 2020.

“These are two fighters that I know extremely well. Derek from a personal perspective after training him for a brief period, and Usyk from a professional standpoint after preparing Tony Bellew for him in 2018.

“I’ve watched both fighters up close on many occasions and I can’t wait for the first bell to go on Saturday night.

“This is the first time I’ve seen him so at peace.” ✌️@TonyBellew on @DerekWarChisora’s demeanor ahead of Saturday night pic.twitter.com/lwWv7YbYjb

“One thing that stands out for me with Derek is how bad he has always wanted a fight with Usyk. Before the fight was even signed or rumoured, Usyk was someone who Derek would mention and when you hear talk like that then it’s usually a sign that someone fancies the fight.

“Derek is a fully-blown heavyweight who has been in the ring with every type of fighter imaginable, he won’t fear Usyk in the slightest and he’ll be doing all he can to use his massive weight advantage and get close to Usyk from the start.

“Derek is living so good at the moment and having David Haye with him is a bonus. He’s making the adjustments that you need to make at his age so he can be in the best shape possible. That includes his diet, the way he trains, the way he recovers.

“Derek has had a long and hard career, but by changing things up, he’s still got a lot to offer against these younger fighters. If he can set a fast pace and maintain it, then he has a great chance.

“In Usyk, Derek is facing a highly-skilled pressure fighter who’s brilliant at applying mental pressure that drains the opponent by using his lead foot, hand and changing of levels and angles.

“I watched Usyk so much in the build-up to the Bellew fight and even when the fight arrived, you just have to take your hat off to him and give him the credit he deserves. He’s such a clever fighter and the way he uses his feet and feints is very impressive to watch. He’ll need his feet massively in this fight as Derek will look to be in his face, but he’s a very confident boxer and he’ll believe he has more than enough to keep Derek off him.

“Like Derek, Usyk is full of belief and it wouldn’t surprise me if he saw this fight as a pathway to bigger fights against the likes of Tyson Fury and Anthony Joshua. He’s a fighter who has the skills and ability to compete with almost anyone, but we’re about to find out how he’s going to cope with a much bigger man coming at him for the entire fight.

“This is a fight that has plenty of questions and I can’t wait to be ringside on Saturday so we can all find out the answers.”