Home World There are probably four rocky planets in the habitable zones of nearby... 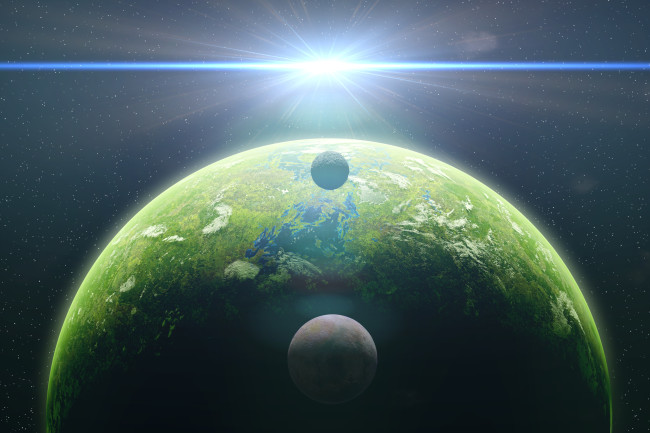 The Kepler Space Telescope changed the way we think about the Universe. NASA launched this observatory in 2009 with the goal of spotting Earth-like exoplanets in the habitable zones of Sun-like stars. By the time the mission ended in 2018, the telescope had studied some 150,000 Sun-like stars and found 2,300 exoplanets, about half of all that are known.

That’s an impressive achievement. But it hides some peculiar problems that the mission came up against. Kepler found that Earth-like planets around Sun-like stars turn out to be much harder to spot than anticipated. Consequently, astronomers have found it hard to make good estimates of the number that are likely to be nearby.

Now that has changed thanks to the work of Steve Bryson at NASA Ames Research Center and an international collaboration, who have crunched the numbers from Kepler in detail. Their work leads to the first estimate of the number of rocky planets in the habitable zones of Sun-like stars in our local neighborhood. The answer, they say, is that there are probably just 4 Earth-twins within 30 light-years of us.

That’s something of a surprise, even disappointment, when earlier estimates had suggested that there could be as many as 11 billion habitable exoplanets in the Milky Way. So how do Bryson and his colleagues arrive at their figure?

Kepler looked for exoplanets by measuring changes in the amount of light received from a particular star. An exoplanet passing in front of a star blocks some of the light, albeit a tiny percentage. So Kepler looks for any small changes.

But this approach assumes that stars produce a relatively constant amount of light, just like our Sun. But one of Kepler’s early discoveries was that this assumption is wrong. Sun-like stars turn out to be much more variable than astronomers had thought and this variability hides the presence of exoplanets. “Identifying habitable zone rocky planets proved to be a greater challenge than anticipated,” according to Bryson and his team. 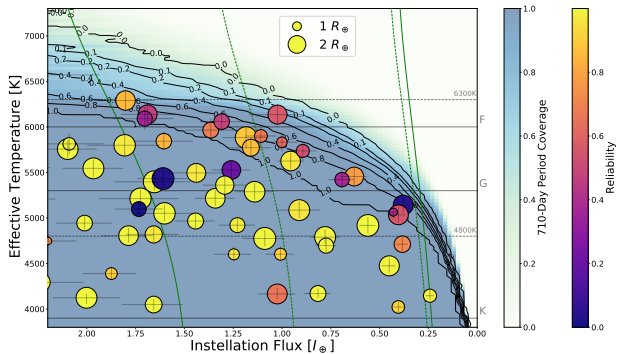 In response, NASA extended Kepler’s mission from four to eight years, in the hope that the extra data would help to reveal more exoplanet candidates. But then disaster struck. To gather light, the space telescope must point with great accuracy at a small piece of sky and the spacecraft is equipped with four reaction wheels that control its orientation.

But in 2012 and 2013, two of the wheels failed leaving the spacecraft crippled. Lower precision observations continued until 2018 when the spacecraft finally died but the new data never quite made up for the problems associated with star variability.

As a result, the final data release from Kepler contains just 9 potentially habitable candidates. These are unambiguously rocky planets within the parent star’s habitable zone that are a similar size to Earth (between 0.5 and 1.5 times Earth’s radius).

At first sight, it seems hard to make reliable extrapolations from so few data points. But statisticians have a number of tricks up their sleeves that they can use to gain further insight.

One is to include extra data, for example from stars that are hotter and cooler than Sun-like stars and to include larger exoplanets, even though those are more likely to be gaseous than rocky. “It is often the case that using data from a wider range will give better results,” say the team.

Kepler also studied a tiny area of the sky, amounting to about two scoops of the Big Dipper, near the constellation of Cygnus. So the numbers can be carefully multiplied to make them representative of the whole sky.

In this way, Bryson’s team calculate that, on average, between 37 and 60 percent of Sun-like stars must host a rocky exoplanet in their habitable zones. This makes the team confident that within 30 light-years of here, there must be about four rocky planets in the habitable zones of Sun-like stars. The closest is probably about 20 light-years away.

And even if we do find planets like these, being in the habitable zone is no guarantee that life will have evolved in these places. For the moment, the only place in the universe where that has happened is on our pale blue dot orbiting a nondescript yellow dwarf star.

Sometimes the task of finding Earth-like planets sounds easy — for example, when astronomers say there must be 11 billion of them in the galaxy. The reality, as Bryson and his team show, is that it will be significantly harder.