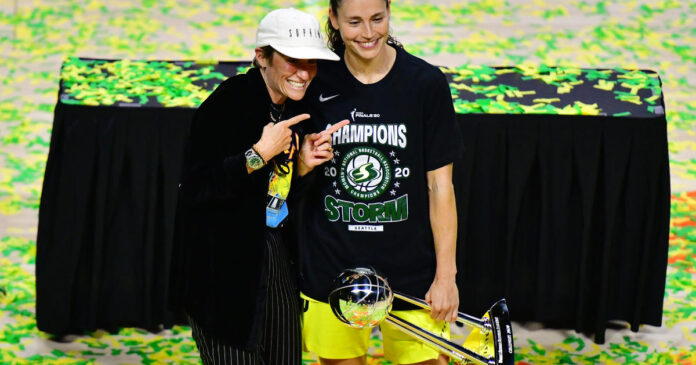 Megan Rapinoe and Sue Bird, an iconic power couple in women’s sports, have added a new ring to their collection. Bird shared a photo on Instagram on Friday showing Rapinoe getting down on one knee while sliding a ring onto Bird’s finger — no caption needed.

Rapinoe and Bird, both history-making athletes, met at the Rio Olympics in 2016 and went public about their relationship the following year, according to CBS Sports. In 2018, they became the first openly gay couple to be on the cover of the Body Issue of ESPN The Magazine in 2018.

The couple has several accolades between them, including Olympic gold medals and national titles. Rapinoe, a midfielder for the U.S. Women’s National Soccer Team and forward for Seattle Reign, is a two-time Olympian who took home the gold in 2012 and led the USWNT to their fourth World Cup title in 2019.

Bird, a guard for the basketball team the Seattle Storm, is a three-time WNBA champion, all-time assists leader, 11-time WNBA all-star, four-time Olympic gold medalist with USA Basketball, and has been named one of the greatest players in WNBA history by the association.

Congratulations quickly poured in for the Seattle-based couple. Bird’s team shared a photo of her and Rapinoe, calling the duo “THE power couple” and using the hashtag #LoveWins.

In the days leading up to the engagement, both Rapinoe and Bird have pushed for their followers to vote in the upcoming presidential election. Just a few hours before Bird posted the photo, Rapinoe shared photos on her Instagram story saying she was going to the ballot box.