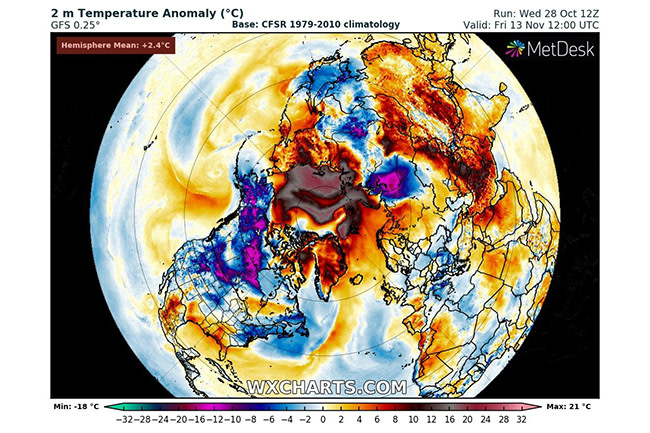 Now, in one significant way, the situation has only gotten worse.

With the onset of winter, large swaths of Arctic waters that should be frozen over by now remain ice free. As a result, the extent of the ice is currently running at record lows for this time of year.

As of Oct. 29th, sea ice extent was 1.3 million square miles less than the median extent for the years 1981 through 2010. That area of ‘missing’ ice is about a third again as large as all of the U.S. states east of the Mississippi River. 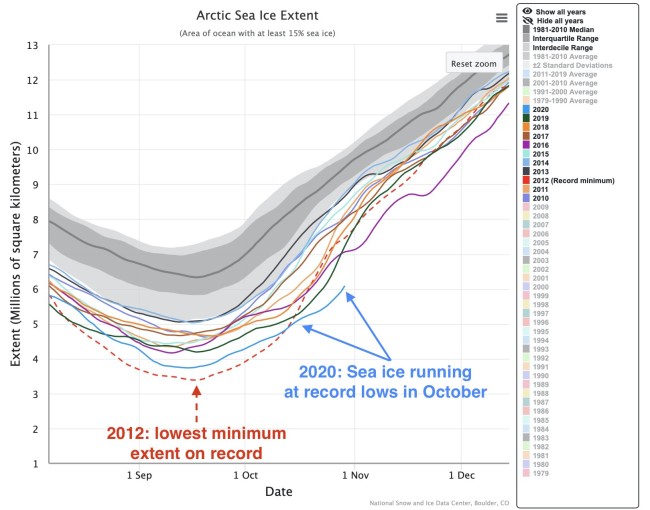 During the latter part of October, the extent of Arctic sea ice has been at record lows. (Credit: NSIDC, with annotation added)

“The main factor is ocean heat,” says Walt Meier, a senior research scientist at the National Snow and Ice Data Center. (By way of full disclosure, the NSIDC is based at the University of Colorado, where I direct the Center for Environmental Journalism.)

In September, sea surface temperatures in the Laptev Sea off Siberia climbed higher than 5 degrees C, or 41 F. “That’s insanely warm for the Arctic Ocean, especially in that region, far away from any warmer inflow from the Atlantic or Pacific.”

Meier notes that winds and waves have mixed some of that heat down into the water column. For ice to form on the surface, heat needs to be lost to the atmosphere. “So that’s where we are now,” he says. “The ocean still has heat, so ice is not yet forming. And that heat is going into the atmosphere.”

The outlook for temperatures in the Northern Hemisphere through Nov. 13, as calculated by a model. The dark colors over the Arctic show where temperatures are forecast to be more than 10 degrees C warmer than normal. (Credit: WXCHARTS.com)

You can get a feel for this effect in the animation above, which shows a model forecast for how air temperatures near the surface in the Northern Hemisphere will vary from normal from late October through Nov. 13. Note the grayish colors in the Arctic just off Siberia.

Here, temperatures are forecast to be 10 degrees C, and even more, above normal. This, according to Meier, is a result of all the heat escaping from open Arctic waters into the atmosphere.

“Normally at this time of year in that location, there’d be ice present and air temperatures can quickly drop as the ice insulates the air from the ocean,” he says.

Why is the ocean so warm? It’s tied to very early melting of the sea ice following winter last year. That occurred because of “extreme conditions,” Meier says. Southerly winds along the Siberian coast “brought warm air temperatures and also served to push the ice away from the coast, initiating the opening.”

Temperatures were so warm in Siberia, in fact, that wildfires began igniting there in May — which was very early in the season. (Scientists thought that in some cases these were “zombie fires,” which had started the previous year and continued to smolder under the snows of winter, re-emerging as soon as the snow melted.)

Thanks to the warm temperatures, large amounts of sea ice disappeared earlier in the season than usual, exposing the ocean surface to the warming rays of the Sun. Whereas ice has a very high albedo, meaning it reflects most of the sunlight that hits it, the relatively dark, low-albedo sea surface absorbs much of that energy, and so the waters warm.

“The ice was already opening up by June 21,” Meier says. “So you had open water when the sun was at its maximum in the Northern Hemisphere — 24 hours of daylight in the Arctic bringing in energy to the low albedo ocean water. That served to melt more ice and heat up the ocean.”

Continued southerly winds may have also churned up some heat from the sub-surface ocean.

Now, with the Sun barely above the horizon along the Siberian coast, the waters are exposed to almost no solar radiation. And it now looks like enough heat has escaped from the ocean to allow ice to begin forming. 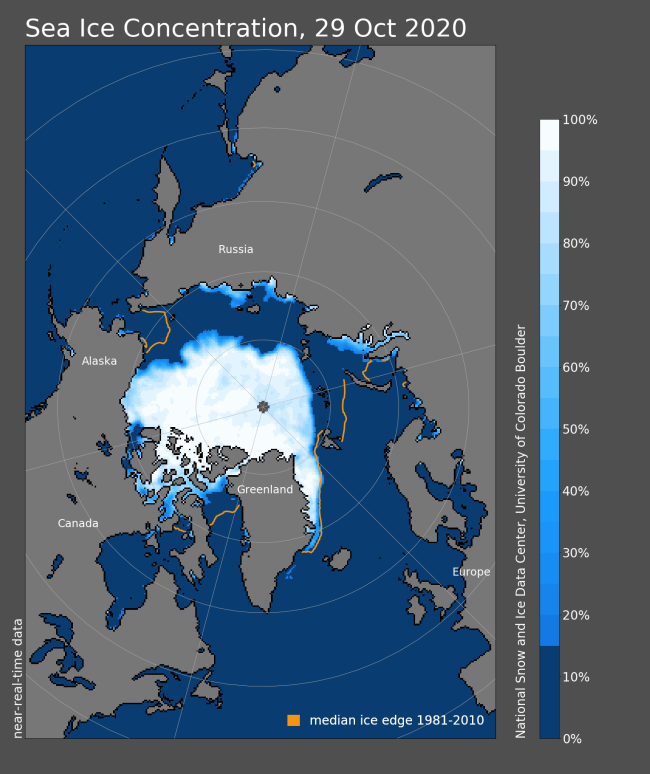 The concentration of Arctic sea ice as of Oct. 29, 2020. Ice has finally begun to form along the Siberian coast. But most of the region should already be iced over. (Credit: NSIDC)

You can see it in the bluish areas along the Siberian coast in the map above. About a week ago, there was little to no ice there.

Interestingly, once the ocean gives off sufficient heat to allow sea surface temperatures to fall low enough, ice can form rapidly, Meier says. So we should not be surprised to see the extent of the ice cover in the Arctic catching up in coming weeks.

Moving forward, what should we expect? A delay in freeze-up makes the spring ice cover somewhat thinner, according to Meier. But the weather conditions during next year’s warm season will be much more important

Over the long run, the impact of human-caused warming in the Arctic couldn’t be clearer. It can be seen in many ways. For example, every calendar month of the year has seen a long-term decline sea ice extent.

As the animation above shows, it can also be seen in a dramatic decline in the estimated volume and thickness of Arctic sea ice. As of the end of September, ice volume was just one quarter of what it was in 1979.