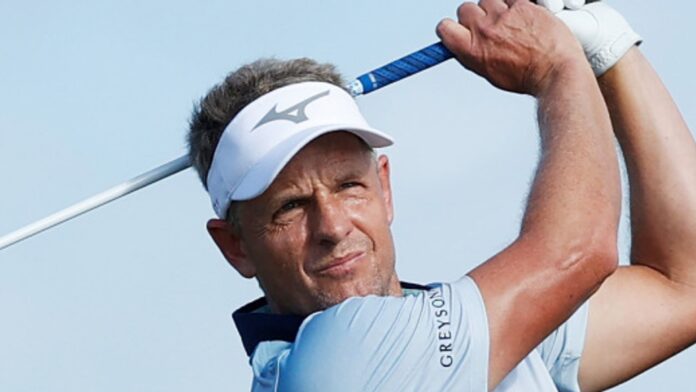 Former world No 1 back in form and heads into the weekend just three shots behind the leaders, while Padraig Harrington remained four off the pace. Watch Saturday’s third round live from 4pm on Sky Sports Golf.

Luke Donald’s game continued to head “in the right direction” as he fired a superb 68 on a windswept second day of the Bermuda Championship.

Winds gusting up to 40mph sent scores soaring in round two at Port Royal Golf Club in Southampton, with Donald one of only eight players to break 70 as he reached the halfway stage just three off the lead.

Ryan Armour (70) and Wyndham Clark (68) top the leaderboard on eight under heading into the weekend, with Kramer Hickok one stroke behind having reached nine under before bogeys at 14 and 15 took some shine off his 68.

Donald was delighted with his form in the tricky conditions, mixing five birdies with two bogeys to propel himself 40 places up the leaderboard and into a tie for sixth with overnight-leader Peter Malnati and Kiradech Aphibarnrat, who defied the strong, swirling breeze to fire a bogey-free 66.

“Certainly in my top-10 windy days,” said Donald, who has not posted a top-50 finish since the coronavirus shutdown and missed the halfway cut in five consecutive tournaments, sending the former world No 1 slipping to 449th in the current rankings.

“I think the golf course was probably designed to have some wind where it is in Bermuda on this kind of cliff. There are still some short irons out there and you do have some birdie opportunities, but certainly very windy, had to really control your ball.

“Seemed like some pretty good crosswinds out there, too, on certain shots and that definitely made it very tricky. I feel quite exhausted after that round, took a lot of mental and physical exertion.

“My golf results haven’t been great for a while really and so feel like I’ve been working on some stuff that’s helping, and got a little bit of added confidence this week and good to see some scores going in the right direction.

“It’s always nice to hit some quality irons in tough conditions like this. You can’t really fake it around when it’s this windy, you have to hit it pretty solid, so that’s a good sign.”

European Ryder Cup captain Padraig Harrington stayed four shots off the lead after a solid two-birdie, two-bogey 71 but Danny Willett and Russell Knox both struggled to keep the mistakes at bay.

Willett was two under for his round after 11 excellent holes, but he then bogeyed the next three and ran up a triple-bogey seven at the 15th after his drive careered out of bounds.

Meanwhile, Henrik Stenson emerged as an injury doubt ahead of the Masters when he withdrew before the start of the second day’s play due to an ankle problem.