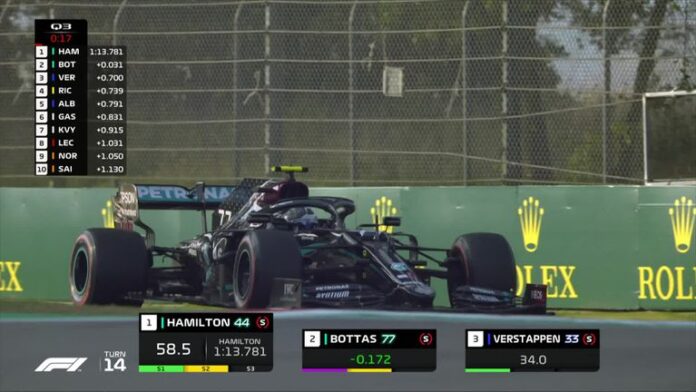 But F1’s runaway championship leader philosophical about losing out on pole position to his Mercedes team-mate after turnaround on final laps; Watch Sunday’s Emilia-Romagna GP live only on Sky Sports F1 on Sunday at 12.10pm

Hamilton has been supreme in the decisive third and final phase of qualifying this year, claiming nine of 12 poles before Imola, but had to give best to his Mercedes team-mate on Saturday after Bottas turned the tables in the final laps of Q3.

Hamilton held an advantage of 0.031s after the penultimate laps but, although he improved his time by a further seven hundredths of a second on the final Q3 laps, Bottas found nearly two tenths on his own lap to seize his 15th career pole.

“It was a pretty poor lap from myself. These things happen, you can’t always get it perfect.”

F1’s return to Imola after a 14-year absence is taking place across a unique two-day weekend, meaning all the action so far took place on Saturday.

Only Kimi Raikkonen among the current field had ever driven F1 machinery over a race weekend at the fast, flowing track.

“What a beautiful place we’re in here in Italy and the track is unbelievable, the speeds that we’re going around this track,” said Hamilton, who last drove on the historic Italian circuit in GP2.

“Grateful to be here and grateful we have the performance that we have, which is really remarkable. It feels better than it did in the last race.

“It was a real challenge out there but I enjoyed it.”