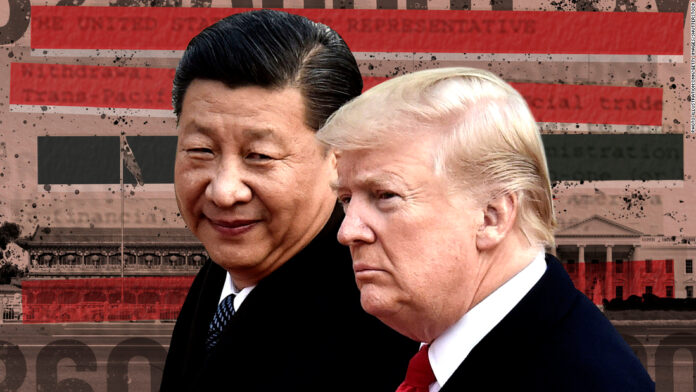 Trump, less than three months into his first term, had spent his election campaign denouncing the Chinese government for undermining the United States, through a wide trade imbalance and cheap labor. “We can’t continue to allow China to rape our country,” Trump said in May 2016.
But when Trump was standing alongside Xi at Mar-a-Lago the following April, his tone changed dramatically. The two leaders exchanged compliments during a news conference, with Trump describing their relationship as “outstanding.” Pictures from the meeting showed the two men sitting side-by-side, smiling broadly, on a golden couch.
“It was a great honor to have President Xi Jinping and Madame Peng Liyuan of China as our guests … Tremendous goodwill and friendship was formed,” Trump tweeted shortly after the visit.
Three years later, and that “outstanding” relationship is a distant memory.
Trump no longer talks about his friendship with Xi as relations between the two countries continue to plummet, amid stark divisions over trade, technology, human rights and accusations of Chinese expansionism.
As Trump battles for reelection in November’s presidential election, experts now say that Xi may have missed a golden opportunity to establish a more beneficial relationship with the US President.
In Trump, China found an American leader who seemed focused on transactional politics and trade deals, rather than human rights and Chinese foreign policy, both topics which the ruling Communist Party have been traditionally eager to avoid.
It wasn’t just their relationship with the US either. More broadly, Trump’s isolationist “America First” foreign policy offered Xi a clear opening to assert China’s global leadership credentials across a range of key policy areas — from the climate crisis to free trade.
But rather than building up goodwill, China chose to intimidate its global partners and indulge in fierce nationalist rhetoric. And instead of becoming a global power to rival the US, China saw its reputation plunge around the world.

How Trump could have helped Xi

Less than a week before Trump took office in January 2017, Xi took the stage in Davos, Switzerland, at what appeared to be the dawn of a golden era for China and Beijing’s international influence.
In a speech to the global liberal elite at the World Economic Forum, held in the Swiss Alps, Xi called for countries to shun protectionism in a clear swipe at Trump’s “America First” rhetoric.
His speech was well received among economic leaders. In his introduction of Xi at Davos, World Economic Forum founder Klaus Schwab said “the world is looking to China.”
Daniel Russel, who was US assistant secretary of state for East Asian and Pacific affairs under President Barack Obama, said that it was Trump’s anti-globalist rhetoric as much as Xi’s words that made China look like a potential alternative global leader to the US.
“At the same time that Xi was hypocritically claiming to be the grand defender of the global system, Trump was attacking it viciously and putting forward a very nationalist jingoistic message. So that magnified the contrasts and widened the gap,” said Russel, who is now vice president of international security and diplomacy at the Asia Society Policy Institute.
Across a wide range of areas, Trump’s policies opened an opportunity for China to take a more leading role in global affairs. Leaving the Trans-Pacific Partnership (TPP) in January 2017 opened the door for China to push its own regional trade deal. After Trump ditched the Paris cimate change accords five months later, Xi told a gathering of Communist Party leaders China would be a “torch bearer” on the issue.
When Trump began to distance the US from its allies, calling on long-time partners to pay their “fair share” of defense spending, Beijing took the opportunity to move closer to regional powers.
China and Japan planned an exchange of state visits for the first time in a decade, thawing a deep diplomatic freeze which had been in place since a territorial dispute over islands in the East China Sea in 2012. South Korean leader Moon Jae-in announced in June 2017 that the deployment of a controversial US-made missile defense system, heavily opposed by China, would be deferred. Philippine President Rodrigo Duterte, leader of one of the US’s closest allies in Asia, said that he “loved” Xi Jinping.
“I think at the start of the Trump administration, China was being seen by the rest of the world as a country which potentially could provide a good steadying role in steering the world though the next turbulent phase in the coming few years,” said Steve Tsang, director of the SOAS China Institute think tank in London.
For Xi, it was a remarkable 12 months. The Chinese government saw its stock rise internationally, built a close relationship with the new US President and had been handed strategic victories on trade, foreign policy and climate change. In short, “the Trump administration was a godsend for the Communist Party of China,” said Tsang.

Why it went wrong

This year, Trump has been eager to inflame popular anger against China for its handling of Covid-19 — at least in part to distract from his administration’s own failure to contain the virus domestically.
He regularly describes the disease as the “China virus” and has placed a large proportion of the blame for the escalating US epidemic at Beijing’s door.
Yet despite his regular attacks on China, Trump never attacks Xi personally.
On August 11, seemingly more in sorrow than anger, Trump said he used to like Xi, but he didn’t “feel the same way now.”
“I had a very, very good relationship, and I haven’t spoken to him in a long time,” he told Fox Sports Radio.
Xi and Trump are now a long way from where they started three and a half years ago, and in that time Beijing’s reputation around the world has suffered.
“Anti-China sentiment is at its highest levels in decades … and Beijing is aware of that,” Weiss said.
As early as August 2018, Chinese officials in private were voicing their concerns that Xi was mishandling the US relationship and risking a disastrous plunge in bilateral relations. Those voices are only likely to grow louder ahead of the 2022 National People’s Congress in China, where Xi would normally be expected to hand over power to a chosen successor.
“I suspect that Xi might be facing some internal challenges from people within the Communist Party who are not happy about his heavy-handed style,” said He, the Lehigh University China expert.
But whether or not China has taken advantage of the Trump administration’s shrunken presence on the world stage, experts said that in the long run, the fundamentals favor Beijing and Xi.
Russel said that the US and other leading nations were heavily reliant on China and the massive wealth generated by its economy, making any moves towards a broader decoupling and a return to a Cold War level of separation unlikely.
“If you look at it from China’s point of view … are you going to call into question the financial goose that lays the golden egg?” he said.

America’s Oldest City Is Not Where You’d Expect