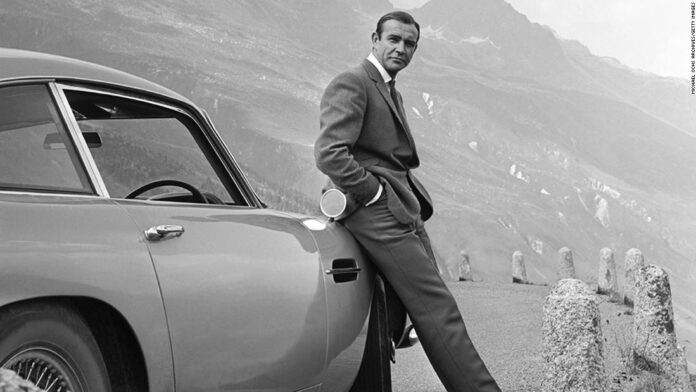 The actor “died peacefully in his sleep,” publicist Nancy Seltzer said in a statement Saturday.
“His wife Micheline and his two sons, Jason and Stephane have confirmed that he died peacefully in his sleep surrounded by family. There will be a private ceremony followed by a memorial yet to be planned once the virus has ended,” the statement said.
Connery, who was awarded a knighthood in 2000 for his contribution to the arts, played the British spy in seven movies, beginning with “Dr. No” in 1962, the first of the Bond movies.
He wasn’t just Bond, of course. Connery starred in an Alfred Hitchcock film, 1964’s “Marnie,” opposite Tippi Hedren; was part of the all-star cast in 1974’s “Murder on the Orient Express”; played Indiana Jones’ father, in 1989’s “Indiana Jones and the Last Crusade”; and won an Academy Award for best supporting actor for his performance as Chicago cop Jim Malone in the 1987 film “The Untouchables.”
But like so many characters in the Bond films, he could never quite escape 007. He gave up the role twice before finally ending his involvement with 1983’s puckishly titled “Never Say Never Again.”
James Bond producers Michael G. Wilson and Barbara Broccoli said they were “devastated” by the news of Connery’s death in a statement posted to the official 007 Twitter account.
“He was and shall always be remembered as the original James Bond whose indelible entrance into cinema history began when he announced those unforgettable words “The name’s Bond… James Bond” — he revolutionized the world with his gritty and witty portrayal of the sexy and charismatic secret agent,” the producers said.
“He is undoubtedly largely responsible for the success of the film series and we shall be forever grateful to him.”
Scottish First Minister Nicola Sturgeon said she was “heartbroken” to hear of Connery’s death.
“Our nation today mourns one of her best loved sons,” she said in a statement. “Sean was born into a working class Edinburgh family and through talent and sheer hard work, became a film icon and one of the world’s most accomplished actors.”
Sturgeon also paid tribute to Connery as “a patriotic and proud Scot,” saying it was a privilege to have known him. “He was a lifelong advocate of an independent Scotland and those of us who share that belief owe him a great debt of gratitude,” she said.
Actor Daniel Craig, the most recent Bond, said Connery had “defined an era and a style” and was one of cinema’s true greats.
“The wit and charm he portrayed on screen could be measured in mega watts; he helped create the modern blockbuster. He will continue to influence actors and film-makers alike for years to come,” said Craig in a statement shared by the official 007 Twitter account.
Actor Hugh Jackman tweeted: “I grew up idolizing #SeanConnery. A legend on screen, and off. Rest In Peace.”
Britain’s Pinewood Studios, where the Bond films are filmed, tweeted: “Memories of this outstanding actor and his unforgettable embodiment of superspy James Bond will forever be cherished at Pinewood.”

Connery’s fame as the dashing spy Bond sometimes proved a double-edged sword.
As early as 1965, just prior to the premiere of “Thunderball” — the fourth Bond film — Connery testily corrected a Playboy interviewer about concerns over typecasting.
“Let me straighten you out on this. The problem in interviews of this sort is to get across the fact, without breaking your arse, that one is not Bond, that one was functioning reasonably well before Bond and that one is going to function reasonably well after Bond,” he said. “There are a lot of things I did before Bond — like playing the classics on stage — that don’t seem to get publicized. So you see, this Bond image is a problem in a way and a bit of a bore, but one has just got to live with it.”
In general, he didn’t suffer the film industry gladly. He made his last film, “The League of Extraordinary Gentlemen,” in 2003 and called it a career at age 73.
If there was a role he was always proud of, it was conveyed in the title of his 2008 memoir, “Being a Scot.” Connery was a strong advocate for his native Scotland — despite living in the Bahamas — and a vocal proponent of Scottish independence from the UK.
He had a tattoo that said, simply, “Scotland For Ever” and never considered dropping his much-parodied burr, even when playing Russians, Irishmen, Egyptians or Americans.
“Drama is conveyed with emotion, and it’s best to spend time looking for that emotion — which is international — instead,” Connery told the UK edition of GQ. “Besides, I think there is a certain musicality each person has in their own tongue.”
His bluntness could also get him into trouble and some of his views were problematic.
In 1965, in response to a question about his Bond character hitting women, he told Playboy magazine that he didn’t “think there is anything particularly wrong about hitting a woman — although I don’t recommend doing it in the same way that you’d hit a man. An openhanded slap is justified — if all other alternatives fail and there has been plenty of warning.”
He stood by those comments in a 1987 interview with Barbara Walters, a perspective that took on a new tone in 2006, when Connery’s first wife, Cilento, wrote in an autobiography that he had beat her in a 1965 incident in Spain.

He was born Thomas Sean Connery in 1930 to working-class parents in Edinburgh, Scotland, and dropped out of school during World War II at the age of 13.
“The war was on, so my whole education time was a wipeout,” he told Rolling Stone in a 1983 interview. “I had no qualifications at all for any job, and unemployment has always been very high in Scotland anyway, so you take what you get. I was a milkman, laborer, steel bender, cement mixer — virtually anything.”
In 1947, he joined the British Royal Navy, serving just three years after a stomach ulcer ended his time in the service.
He returned to Edinburgh, where he worked as a bricklayer, lifeguard and coffin polisher (“I wasn’t very good at it,” he told GQ), according to his official biography. He picked up bodybuilding as a hobby and in 1950 — according to Connery lore, anyway — placed third in the Mr. Universe competition.
Connery later auditioned for and got a role in the touring chorus for “South Pacific,” which launched his acting career in 1953. He made his screen debut in an uncredited role in the 1955 British movie “Lilacs in the Spring,” followed by a role in the 1957 film “No Road Back.”
But it was not until film producer Albert “Cubby” Broccoli chose Connery to portray Bond in the first big-screen adaptation of the Ian Fleming novels (“Dr. No”) that the ruggedly handsome actor saw fame. Fleming, whose Bond was a blue-blooded Englishman, grew to love Connery’s portrayal so much, he gave his hero a Scottish father in one of his last Bond books, “On Her Majesty’s Secret Service.”
Years later, film critic Philip French described Connery’s portrayal of Bond in “Dr. No” as “confident but not arrogant, a man comfortable in a dinner jacket but not born to the purple.”
He went on to star in five consecutive Bond films and seven in total. Connery was Bond in “From Russia with Love” in 1963, “Goldfinger” in 1964, “Thunderball” in 1965 and “You Only Live Twice” in 1967, before he left the series in a dispute over compensation.
He later returned to film two more Bond movies, 1971’s “Diamonds are Forever” and “Never Say Never Again” in 1983, before turning in his license to kill for good.
Connery is consistently ranked as fans’ favorite Bond, a sentiment often shared by film critics.
“He really set the bar, and everyone else has to measure up to that,” said Wilson, Broccoli’s stepson, who now runs the production company that makes Bond films.