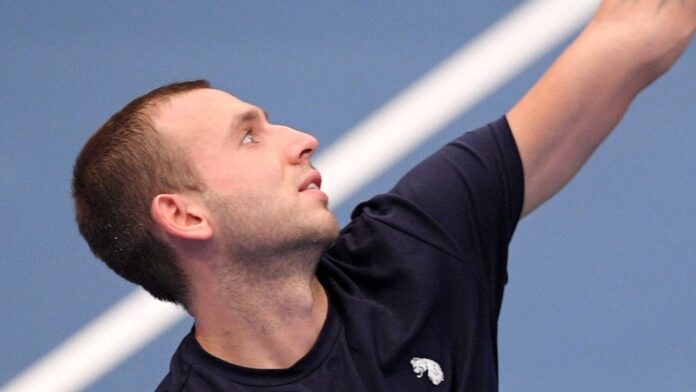 The British No 1 fell in straight sets to the lucky loser, who defeated world No 1 Novak Djokovic in the quarter-finals; Lorenzo Sonego will meet Russian Andrey Rublev in the final on Sunday

Dan Evans was defeated by Lorenzo Sonego 6-3 6-4 in the Erste Bank Open semi-finals, as the Italian backed up his impressive quarter-final victory over Novak Djokovic.

The British No 1 reached his second ATP semi-final in a row with a 7-6 (7-3) 4-6 6-3 win against Grigor Dimitrov, but didn’t replicate those heights against Sonego.

He was broken in his first service game of the match by the world No 42. After that, he was unable to restore order as his Italian opponent continued where he left off against Djokovic.

Sonego’s route to the semi-final, and now final, is a remarkable one as he actually lost his final qualifying match ahead of the competition. However, he was able to enter the main draw as a lucky loser when Diego Schwartzman withdrew.

An impressive run means that…

Lorenzo Sonego is the first lucky loser to reach the final in Vienna since Andreas Haider-Maurer did so back in 2010.

During the 80-minute semi-final contest between Sonego and Evans, the former fired down 25 winners and won 80 per cent of points on his first serve.

In contrast, Evans could only secure 55 per cent of points on his first serve and needed treatment on a shoulder complaint during the second set.

“I am really happy, after yesterday it was not easy to play against Evans, but I won and I am so happy,” said Sonego.

“It’s amazing. I started this tournament [by losing] in the qualies. It’s not easy after losing my [qualifying] match to win four matches and now I got to the final.”

The Italian, who is seeking his second career title, will face the in-form Andrey Rublev in Sunday’s final.

Rublev booked his place there as a result of a productive first set against Kevin Anderson, before the two-time Grand Slam finalist was forced to retire.

Rublev, the fifth seed, led 6-4 4-1 when Anderson pulled out due to a right thigh issue. He has now won 18 of his past 19 matches and is going in search of a fifth ATP title of the season.

Eyes on the prize

If Andrey Rublev wins Sunday’s final then he will qualify for the ATP Finals in London and become the fifth Russian to compete in the year-end competition.

“I have such an amazing team, such amazing friends around me that always support me and probably that’s why I’m playing so good,” Rublev said in his on-court interview.

He has yet to drop a set or a service game in the tournament and Sonego, who is ranked 34 places lower than his opponent in the final, has vowed to take a no-holds-barred approach to it.

“I don’t have any expectations,” he said. “I go with confidence and I [will] try to do my best.”