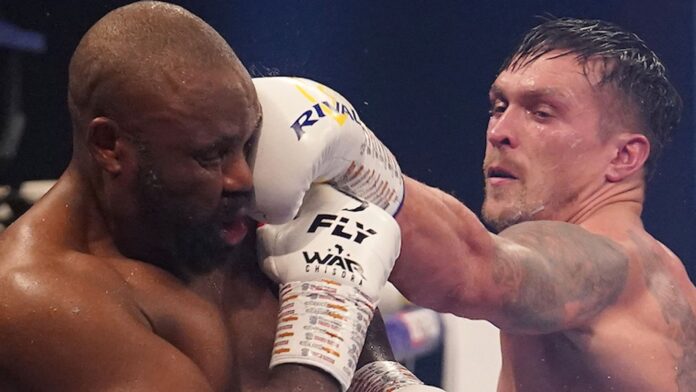 Oleksandr Usyk passed his first major test in the heavyweight division by outfighting Derek Chisora and winning their high-stakes clash via unanimous decision on Saturday night.

Usyk remains the WBO mandatory challenger to Anthony Joshua, who watched from ringside, and who he intends to fight in 2021.

Chisora piled forwards from the opening bell and his roughhouse tactics had reddened Usyk’s body before the end of the first round.

Usyk’s precision was on display when he pinged in an early left hand but Chisora did not budge and continued wading in.

Although Chisora would land occasional clubbing blows, Usyk’s constant movement started to ratchet up in the second round and the skilful Ukrainian’s peppering left hand found its home more and more often.

Chisora’s newfound engine under the guidance of manager David Haye was fully required – after three or four rounds he had covered a substantial distance just by chasing his elusive opponent.

Usyk, similarly to his fight with Tony Bellew, was in control of the fight’s rhythm by its halfway stage.

A vicious assault from Usyk almost ended Chisora’s resistance in the seventh round – he clocked him first with a right hook, then a further flurry that caused the British veteran to stagger backwards into the ropes.

Chisora’s work-rate was admirable and he enjoyed the odd moment of success but the punishment dished out by Usyk’s swift and clinical fists was increasing.

Usyk was kept honest by a burst of bludgeoning punches by Chisora in the ninth round, a reminder of the weight and size disadvantage that the Ukrainian will always find himself at in the heavyweight division.

Chisora is a veteran of brutal fights with Vitali Klitschko, Tyson Fury (twice), Kubrat Pulev, Dillian Whyte (twice) and Carlos Takam but the movement he faced from Usyk was a unique test which he did not shy away from.

Usyk was forced to work hard in the final three rounds to secure his 18th professional victory – Chisora, undeterred and still ambitious, continued his relentless bid to grind down his smooth-moving rival to the bitter end.

Joshua will defend his IBF, WBA and WBO titles against Kubrat Pulev on December 12, live on Sky Sports Box Office, a week after Fury’s homecoming fight.

Joshua and Fury plan to decide an undisputed champion next year but Usyk is now a serious contender for their belts.