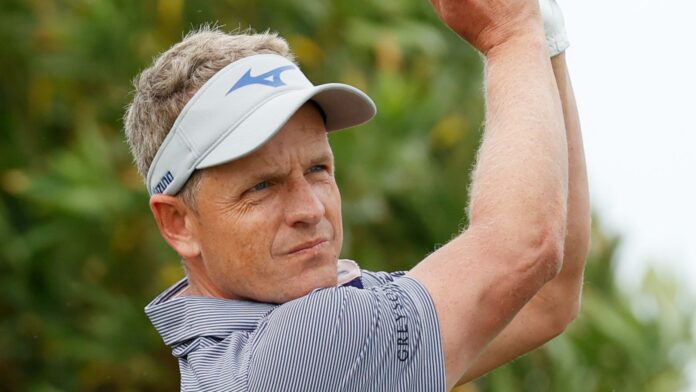 Doc Redman holds one-shot lead in Bermuda and chasing maiden PGA Tour title; Ryan Armour one of three players sitting in a share of second; watch the final round live on Sunday from 4pm on Sky Sports Golf

Luke Donald and Russell Knox are both five strokes off the lead heading into the final round of the Bermuda Championship, where Doc Redman holds a narrow advantage.

Redman carded a four-under 67 on another breezy day at Port Royal Golf Club in Southampton, taking him to 10 under and a shot clear of Kramer Hickok and overnight co-leaders Ryan Armour and Wyndham Clark.

Australia’s Matt Jones is one of three players sharing fifth spot on eight under and Kiradech Aphibarnrat is in the group three of the place, while 23 players head into the final day within five strokes of the lead.

“I’ve had a lot of good results recently and I think it’s just exciting to have a chance,” Redman said. “For people to say that, that’s kind of all you can hope for because even if you had a three-shot lead, you still have to play tomorrow.

“I think whoever plays the best tomorrow wins and I think I have a good chance of doing that.”

Knox birdied three of his last five holes to post a third-round 67 and jump into the group on five under, while Donald slipped down the leaderboard despite birdieing the last two holes of his level-par 71.

Padraig Harrington sits in a share of 24th after a second successive 71 and Ireland’s Seamus Power birdied three of the last six holes of his three-under 68, while Danny Willett dropped 10 behind with a one-over 72.

Who will win the Bermuda Championship? Watch the final round live on Sunday from 4pm on Sky Sports Golf!