Home Sport Usyk: I will be undisputed heavyweight champion 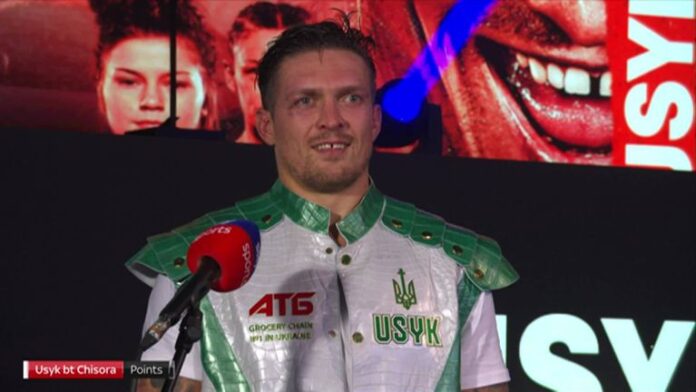 Oleksandr Usyk battles past Derek Chisora to keep himself in line for a shot at Anthony Joshua’s WBO belt but his goals are much higher; did the unbeaten Ukrainian answer enough questions about his natural size and power against Chisora? Joshua and Fury aim to collide in 2021

Oleksandr Usyk warned world heavyweight champions Anthony Joshua and Tyson Fury that he plans on claiming all of their title belts.

Usyk battled past Derek Chisora via unanimous decision on Saturday night to stay on course as Joshua’s WBO mandatory challenger.

The Ukrainian gave himself three out of 10 for his performance, and said after remaining undefeated: “It’s a real test in heavyweight.

“My plan is to go to my home, maximum time with my family. Training and improving myself.”

He intends to use his mandatory shot to face Joshua in 2021.

Joshua must first defend his IBF, WBA and WBO titles against Kubrat Pulev, live on Sky Sports Box Office, on December 12, a week after Fury plans a defence of his WBC belt.

Joshua and Fury have agreed terms to two fights next year which would crown an undisputed champion, if they come through their upcoming defences.

A disappointed Chisora reacted to defeat: “I feel great. I was pushing the pace.

“To everybody who can’t make it [to the fight], I’m gutted for everybody.

“In the heavyweight game, you have to fight not box,

“I gave a couple of rounds away.”

“It is time for you to be a man and honour your agreement. What is this bull**** of you fighting Carlos Takam instead of me, you got to be kidding,” he posted on social media.

Fury demolished Wilder in a rematch earlier this year but a contracted third meeting was shelved when the Brit instead announced he would fight in London on December 5.

“When you were going through your darkest time, I told you that if you got yourself together I would give you a title shot,” said Wilder.

“Being a man of my word, I gave you the title shot.