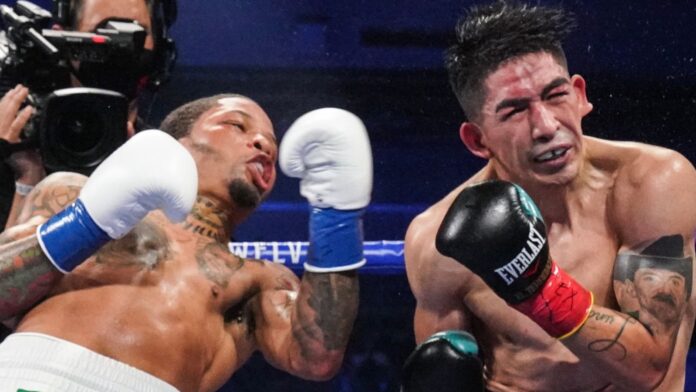 Floyd Mayweather’s protege Gervonta Davis shone in the biggest fight of his career so far; he left with world titles in two divisions; Davis said: ‘I want to maintain both belts. Whatever decision me and my team comes up with, we’ll go with it. I’m not ducking or dodging anybody.’

Gervonta Davis crushed Leo Santa Cruz with a massive knockout in the sixth round of their world title fight on Saturday night in Texas.

Floyd Mayweather’s protégé Davis sensed that Santa Cruz was hurt when he detonated an uppercut that landed flush, and caused an abrupt end to their fight.

‘Tank’ Davis took home the WBA super-featherweight title and a version of the WBA lightweight belt after winning the biggest fight of his prodigious career so far.

Davis is part of an exciting crop of talent at lightweight including Teofimo Lopez (the IBF, WBA and WBC champion), Devin Haney (the WBC champion), and Ryan Garcia (who fights Britain’s Luke Campbell on December 5).

As they totalled up and Santa Cruz’s resistance waned, Davis uncorked the best punch of his life to date to win the fight in a flash.

“The uppercut wasn’t the key coming into the fight, but I adapted to what he was bringing,” said Baltimore’s Davis.

“I knew he was taller and crouching down and moving forward. Once he moved forward, I tried to jab and make him run into the shot.

“He was right there for it. He punches, but he doesn’t try to get out of the way. There was nowhere for him to go on that knockout because I got him into the corner.”

Mexico’s Santa Cruz is a four-weight world champion whose only previous loss in 39 fights came against Carl Frampton, which he avenged.

Undefeated Davis, aged 25, intends on following in the footsteps of his promoter and occasional trainer Mayweather by becoming the world’s pound-for-pound No 1 boxer.

Watch Usyk vs Chisora repeats on Sunday November 1 at 11pm, and on Monday November 2 at 9am. Book it via your Sky remote or book it online here. Even if you aren’t a Sky TV subscriber you can book and watch it here.