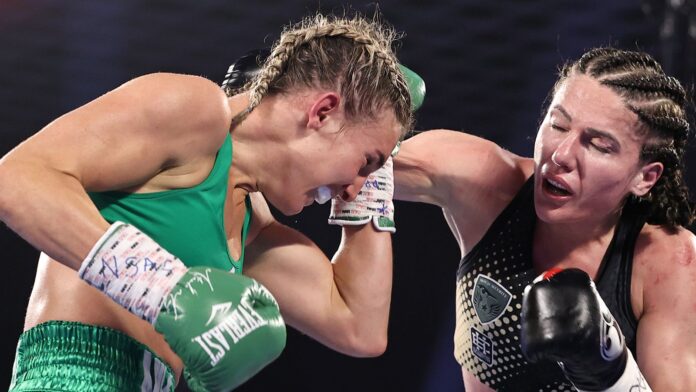 “I definitely want to unify this division,” Mayer reacted.

“I want to do it right away.

“I have the WBO belt now, so let’s make that fight happen. I want Terri Harper next.”

US Olympian Mayer remained undefeated in her 14th professional fight by inflicting a first-ever loss on Poland’s Brodnicka, who was boxing outside of her homeland for the first time.

Brodnicka had lost her world title 24 hours earlier on the scales after twice failing to make weight but Mayer ensured that she would take the gold home with a commanding display.

Mayer has previously told Sky Sports about Harper: “If I were to fight her? I would take her out of that comfort zone that she is in, and take it to her.

“She isn’t well-rounded yet. She still has a long way to go.

“She will develop over time. But by the time she gets to the top level? I’ll be two levels ahead of her. She’ll never catch up to me.”

Watch Usyk vs Chisora repeats on Sunday November 1 at 11pm, and on Monday November 2 at 9am. Book it via your Sky remote or book it online here. Even if you aren’t a Sky TV subscriber you can book and watch it here.