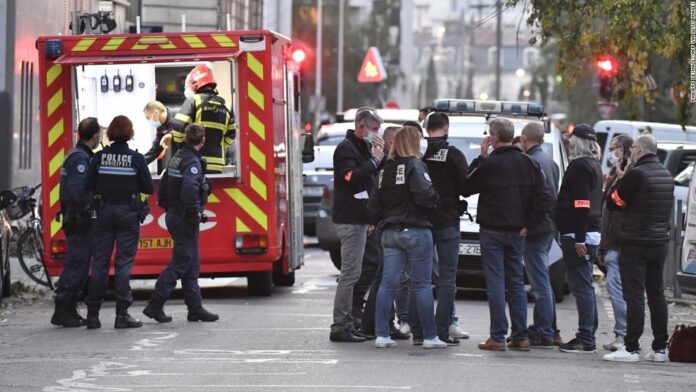 The source added, however, that they are “not ruling out the terrorist explanation,” although it is becoming “less and less believable.”
The 52-year-old priest was shot in the stomach and remains in hospital. French police said Saturday that he was attacked by a lone assailant using a sawed-off shotgun.
The incident sparked a major security operation Saturday in Lyon. Local residents and a municipal police patrol reported hearing two shots near the Hellenic Orthodox church in the city’s 7th district, the Lyon prosecutor’s office said in a statement.
They saw a person running and later found the wounded priest at the back door of the church, prosecutors said.
“It seems that we have a few elements that are making us believe that this is not a terrorist attack,” the source close to the investigation said Sunday. Investigators are “looking into the priest’s personality and relationships.”
A man matching the attacker’s description was “taken in for questioning, but the search is still ongoing” for other potential suspects, the source said.
The Greek Foreign Ministry issued a statement Saturday condemning the attack “against an Orthodox Priest of Greek origin.”
The shooting came only two days after three people were killed in a knife incident at a church in Nice. An investigation into those stabbings is underway but French President Emmanuel Macron has said the country is under attack by “Islamist and terrorist madness.”
Following the attack in Nice, France raised its national terror alert guidance to its highest emergency level and up to 4,000 military personnel were being deployed to boost security at schools, churches and other places of worship.

Fanny Bobille contributed to this report.

If Kim Jong Un destroyed North Korea’s economy to keep Covid-19 out, will sanctions stop him from pursuing nuclear weapons?