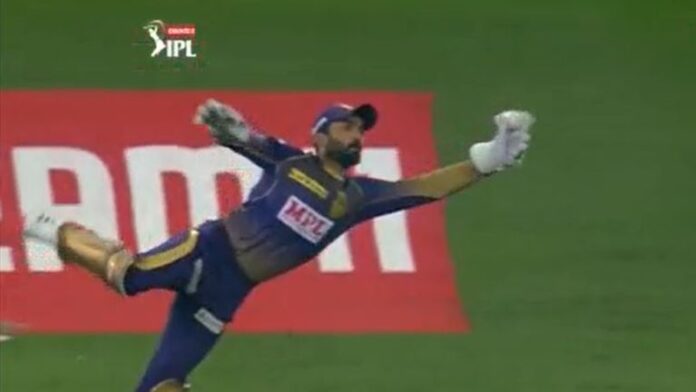 Eoin Morgan clubbed six sixes in an IPL-best 68 not out from 35 balls as Kolkata Knight Riders trounced Rajasthan Royals by 60 runs to keep their play-off hopes alive and eliminate their opponents.

Morgan’s first half-century of the season, which also featured six fours, included back-to-back maximums off England team-mate Ben Stokes as KKR rallied from 99-5 in the 13th over to post 191-7 in Dubai.

Stokes ramps Cummins over fine leg for six with nothing more than a flick of the wrists – what a player! 🔥#RR #KKR #IPL2020

Stokes, who had hit 107 not out against Mumbai Indians and a rapid 50 versus Kings XI Punjab in his previous two knocks, then ramped an outrageous ramped six off Pat Cummins as he raced to 18 in the chase.

But Cummins (4-34) got his revenge, by dint of a spectacular one-handed catch from wicketkeeper Dinesh Karthik, and the Australian bagged each of his wickets, including countryman Steve Smith (4) in his first three overs, as Rajasthan tumbled to 37-5 after five amid a horror start.

Jos Buttler’s presence meant the Royals had hope but he was caught in the deep for 35 from 22 balls as his side were reduced to 80-6 in the 11th over and they ended on 131-9, with the margin of defeat meaning they will now finish bottom of the table, behind Chennai Super Kings on net-run rate.

Kolkata are now on to 14 points and into the final play-off spot but must wait for the results of Monday’s game between Delhi Capitals and Royal Challengers Bangalore – who also have 14 points – and Tuesday’s fixture between Sunrisers Hyderabad and already-qualified Mumbai Indians.

Morgan’s men will definitely qualify if Sunrisers, currently in fifth on 12 points, lose to table toppers Mumbai but if Sunrisers win, Kolkata must hope their run rate of -0.214 is superior to the loser of the Delhi vs RCB.

Kolkata, who had lost their previous two games to slip to the bottom of the standings, looked in huge trouble after collapsing from 73-1 in the ninth over once Rahul Tewatia (3-25) accounted for Shubman Gill (36).

Gill and Rahul Tripathi (39) had shared a second-wicket stand of 72 after Jofra Archer (1-19) inflicted Nitish Rana’s third golden duck in five innings – failings that have been interspersed with scores of 81 and 87 – when he had the opener caught behind from the second ball of the game.

Just what #RR wanted as Rana (0) snicks a beauty behind to fall for a third golden duck in five innings! 😱

But when Gill swept to Buttler in the deep, it triggered a slump of 4-26, with Tewatia also dismissing Sunil Narine and Karthik for ducks.

Morgan and the fit-again Andre Russell (25 off 11) then ignited the innings with a rapid partnership of 45 from just 18 balls.

Morgan went four, four, six, six off the expensive Shreyas Gopal (1-44) and Russell crunched successive sixes off Kartik Tyagi (2-36) before perishing on the deep cover boundary targeting a third in a row.

A couple of quiet overs followed, only for Stokes’ 19th to be thumped for 24 as Morgan nailed back-to-back sixes – the first of which took him to a 30-ball, fifth IPL fifty and first since 2016 – and Cummins cracked a maximum off his own over long-off.

Cummins fell to Tiyagi from the second ball of the final over and Morgan went on to turn down a couple of singles while batting with Kamlesh Nargakoti before muscling the final delivery for six.

Stokes didn’t take long to hit a six of his own as he opened the batting for Rajasthan, flicking Cummins into the stands from the third ball he faced.

The left-hander also had two fours to his name when he edged the Australian behind to the leaping Karthik at the start of the third over.

With Uthappa already out to Cummins, Smith and Riyan Parag (0) joining Stokes in following suit and Sanju Samson (1) falling to Shivam Mavi, Rajasthan had lost half their side inside the powerplay.

It was a position they could not remedy, with Tewatia (31) and Gopal (23no) the only players bar Stokes and Buttler to make double figures as Rajasthan’s campaign came to a disappointing end.

Watch every match of the 2020 IPL live on Sky Sports. Monday’s game is a crunch clash between Delhi Capitals and Royal Challengers Bangalore with the winner guaranteeing a play-off place. Coverage begins at 1.50pm on Sky Sports Cricket and 2pm on Sky Sports Main Event.