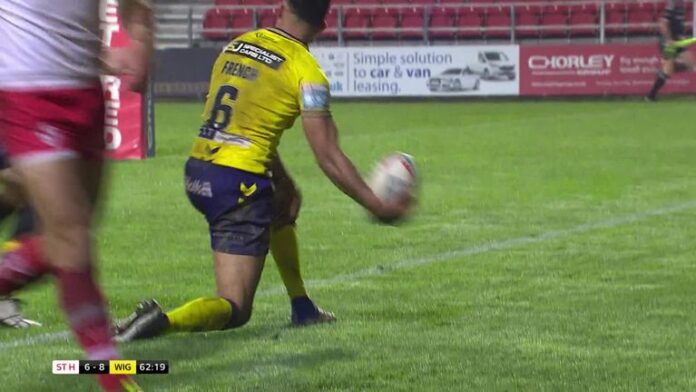 Warriors executive director Kris Radlinski: “This is a very important signing for the club. At a time when the country needs good news, this should make everyone smile, not just Wigan fans.”

The 24-year-old Australian, who has scored 22 tries in 26 matches since joining the Warriors from Parramatta in July 2019, has signed a new contract for next season, with a further option for 2022.

French was already under contract until the end of next year but was thought to be considering an offer to return to his old NRL club and Wigan have pulled out all the stops to keep him.

Warriors executive director Kris Radlinski said: “This is a very important signing for the club. At a time when the country needs good news, this should make everyone smile, not just Wigan fans.

“It is really sad that Bevan is producing moments of magic in front of empty stadiums. Bevan is box office and people like him need to be seen live to be appreciated.

“He is everything that the English Super League should be about. Young, exciting, articulate and the good news is that he is going to get better and better.

“We need to thank our owner Ian Lenagan for making this bold statement in challenging times. This is for the fans of Wigan to thank you for your continued love and support.”

Wigan general manager Kris Radlinski on why the club have changed from their traditional badge to a radical new design.

French said: “I’m very happy to be here. Ever since I arrived, people in the club, team-mates and all the Wigan community have been really welcoming and I wanted to be able to spend the next year or two years here.

“It’s such a relief. It feels like a weight lifted off my shoulders now and I can really focus on the back end of the year.

“Making my decision has been easier thinking about the pros at Wigan. We’ve got great coaching staff here and a great bunch of players. It’s an honour to play with some of the players in this team.

“Being over here by myself you would say has been tough, but you learn a lot about yourself and tend to grow as a person and hopefully I can continue to do that.

“My family in Australia try to watch every game and the main thing they tend to enjoy watching is seeing me with a smile on my face – that’s a big message from my mum, who thinks I look happy here.

“I’ve still got a lot more to achieve and I want them to see me win some silverware this year and hopefully some more next year.”