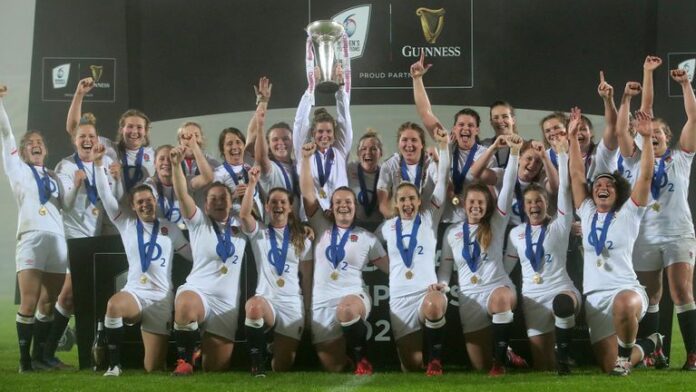 England Women’s Red Roses secured the 2020 Six Nations Grand Slam on Sunday, with a 54-0 against Italy at Stadio Sergio Lanfranchi – their second Grand Slam triumph in succession and third in four years

England Women eased to a second consecutive Six Nations Grand Slam triumph on Sunday, as a comprehensive 54-0 win over Italy at Stadio Sergio Lanfranchi rounded off a flawless campaign.

England notched eight tries in all, as scores from Ellie Kildunne, Poppy Cleall – her fourth in five championship games – Emily Scarratt and Abbie Ward had the Red Roses 28-0 to the good at half-time.

Having already been confirmed as champions last weekend, England dominated from start to finish to secure a record 15th Grand Slam to go with their 16th championship win.

The result means England’s men and women teams have both secured the 2020 titles, the first time they have completed that double since 2017.

In north Italy it took England just four minutes to get on the board when some smart handling fed the ball to Kildunne and a smart step from the full-back saw her crash over.

After Sarah Beckett went close off the back of a scrum, England’s second came from Cleall who drove over from close range.

Following Bern’s try being disallowed for a knock-on, captain for the night Scarratt ran a superb line in the midfield and sprinted in from 25 metres out – her 47th Test try on her 90th cap.

A well-worked driving maul off the back of a five-metre lineout saw Ward dot down for the bonus-point before half-time, with Scarratt’s four successful conversions giving England a 28-0 lead at the break.

Italy’s defence improved after the break and it took until nearly 20 minutes into the second half for England’s first points when Bern powered over from close range.

Breach dived over in the corner after she was set up by finisher Zoe Harrison and then Riley intercepted an Italian pass close to their line to get England’s seventh.

The fourth try of the second half and the final score of the evening was completed when Packer was able to fall down off the back of another controlled driving maul.

After their 2019 Grand Slam success, Simon Middleton’s side went into the Six Nations off the back of three wins in the Quilter Internationals and completed a home and away double over France, as well as beating Italy in Bedford.

It was in France where England began their campaign with a 19-13 win in what was their closest scoreline of the tournament.

Bonus-point wins followed against Scotland (53-0), Ireland (27-0) and Wales (66-7), before finishing the 2020 Six Nations with another bonus-point victory in Italy.