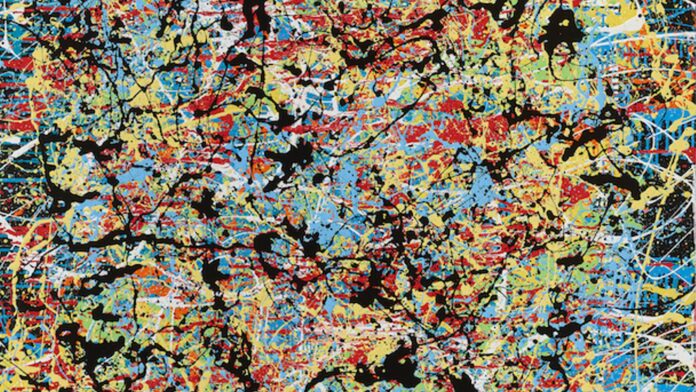 Ed Sheeran has put one of his artworks on sale for the first time as part of a charity auction.

The pop star, 29, has donated the artwork, Dab 2 2020, to the Ed Sheeran: Made In Suffolk Legacy auction, which is raising money for children and young people.

It is the first and only time that one of his paintings has been made available for sale.

The colourful work is called Dab 2 because Dab has been Sheeran’s nickname for his father John since childhood. This is the second painting he has given him, this time to auction off.

“I painted a canvas a day for 30 days,” Sheeran said in a previous interview.

“It was really fun. It’s kind of Jackson Pollocky.

“I bought house paint and just layered it up by flicking it. I just do my art and I love doing it.

“It’s something that makes me happy; that no one else needs to judge.

“There’s no part of the creative process that people judge, if you’re just doing it for yourself.

“Creativity is an amazing thing to make people happy… you just do it and it’s fun.”

His father John Sheeran said: “Ed has been creating art since he was a child.

“This energetic, expressive painting is such a positive affirmation of life.

“It’s like a visual equivalent of one of his upbeat songs.”

Sheeran’s parents John and Imogen wanted to create a lasting legacy from the Ed Sheeran: Made in Suffolk exhibition in Ipswich, which tells the story of his rise to global stardom.

Funds will also benefit the Zest charity, part of St Elizabeth Hospice in Ipswich, which helps teenagers and young adults with progressive and incurable illnesses to live their lives to the full, supported by specialist nurses and an outreach programme.

Sheeran has donated items to the auction including a collection of his childhood Lego bricks, handwritten lyrics to his hit single Perfect and a ticket to his first ever gig at the Royal British Legion in Framlingham, Suffolk, where entry cost £3.

Celebrities including David Beckham, Kylie Minogue and Usain Bolt have also donated items and unique experiences to the auction which has 220 lots and was organised with the help of Sheeran’s parents.

David Beckham has signed a vintage England shirt, Usain Bolt has donated a signed photo montage of his Olympic triumphs and Kylie has given a signed watch.

The idea of a legacy auction to support children and young adults across Sheeran’s home county was created after his parents met Gina Long MBE, founder of the children’s charity GeeWizz.

Proceeds from the auction will help GeeWizz to redevelop a playground for children with special educational needs and disabilities.

Ms Long said: “The generosity from around the globe has been incredible, especially at a time when we are all facing such challenges and uncertainty.

“But it is in this very different world that the pressing need to support children with special educational needs, high dependency disabilities, progressive or life-limiting illness and cancer could not be greater.”

Other artists have donated work to be sold at the auction, including Damien Hirst who has provided the signed limited-edition print Patience 2019 – which is inspired by the spiritual symbolism of the butterfly.

Sheeran has previously painted at Hirst’s studios, creating the spin paintings for his ÷ (Divide) album cover there in 2016.

The auction, which runs until November 8, is now open to online bidders.