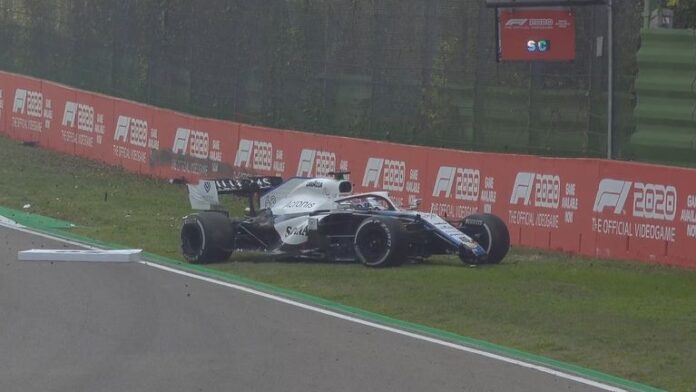 Read on for the Sky F1 expert’s verdict on the sport’s return to Imola at the Emilia-Romagna GP as mighty Mercedes overhauled another Ferrari record in a race that produced plenty of incident and, for some, frustrating lost opportunities to stomach

Congratulations to the Mercedes team for a record-breaking seventh straight constructors’ title. With more championship victories very likely to follow they are surely top contenders for the best team in the history of F1.

Of course, Lotus, Williams, Ferrari, McLaren and Red Bull among others have dominated multiple seasons, but this current group form an unstoppable steamroller. They have a great budget but so do Ferrari, and others have sufficient resources to get the job done too.

The hybrid era since 2014 (in my view F1’s greatest misjudgement because the cars have become too complex, heavy, quiet and insanely expensive) has played into their hands because they rocked up with a power unit leagues ahead of their key rivals. But for seven seasons they have nurtured and developed that head-start such that they’ve simply smashed the opposition in every metric.

They are a calm, focused, mature and an extremely well-oiled and funded machine. They have all the bases covered.

Except for Valtteri Bottas’s luck. After an outstanding pole position lap at the very end of qualifying, reversing the disappointment from just seven days before in Portugal, he then made a fine start to lead the race, before running over a sizeable piece of Sebastian Vettel’s discarded Ferrari bodywork which wedged into his own aero furniture.

Here’s the piece of debris we just removed from VB’s car👇 pic.twitter.com/C4GrYR7ohn

As leader Bottas had the prerogative to pit first which he duly did to cover off Max Verstappen’s stop on lap 18. Lewis then immediately asked to run longer in clear air which was duly granted. I do feel that he’s given more latitude than Valtteri on such changes of plan, but Lewis also has the tyre management and pace to generate the opportunity and make it stick.

Lewis then received the perfect ‘virtual safety car’ gift when Esteban Ocon had transmission problems on lap 30 in his Renault just as Hamilton was both approaching a bunch of traffic to lap and also the pit entry. This comfortably maintained him the lead after a ‘cheap’ pitstop as the pack were circulating more slowly under safety car conditions.

Meanwhile, Bottas was fighting a car with less downforce and efficiency and lost second place to an ever-attacking Verstappen after an error.

In the pack there were some great drives taking place by the likes of Sergio Perez, Daniel Riccardo and Pierre Gasly, who sadly retired with a water leak. Vettel and particularly Kimi Raikkonen (49 laps) went long on their first set of tyres keeping things interesting as they circulated fourth and fifth waiting for a safety car.

It came just too late for Kimi when Verstappen had a tyre blowout on lap 51 dumping him in the gravel trap and clearly out of the race after a feisty drive.

The inevitable real safety car didn’t play so well for Hamilton as he’d just passed the pits, but stopping next time around he maintained his lead against the mildly limping Bottas.

George Russell had been doing a fine job in his Williams, keeping the McLarens very much in sight and just edging into the points. Then while trying to keep his tyres warm behind the safety car he made what he describes as the worst mistake of his career and binned it into the wall approaching Aqua Minerali.

It would be reasonable to wonder why he was giving it such a big boot full of throttle heading downhill on a curve with walls close by, but that describes a lot of the circuit. It was a very painful and public mistake and likely threw away his first ever F1 point(s).

His hard compound tyres had been on since lap 11, and that mistake is easier to do than you might expect. George has enough confidence and credibility in the bank to survive that one. And the full vocal support of none other than Fernando Alonso and Lewis Hamilton.

Alex Albon in the second Red Bull sadly doesn’t and it was another difficult race in which he finished 15th and last after both losing out in combat and having a spin at the Villeneuve chicane.

I take no pleasure and more than a little pain in saying that if he loses that seat he can have no complaints. He is better than this and I so hope he can get it together because Red Bull need him up front urgently.

Russell’s shunt extended the safety car period to seven laps as they cleared up the debris and moved the car, which impacted the end result for several drivers.

Perez had been driving a fine race yet again and the team chose to pit him for fresh tyres to the end, but there were many fewer laps at racing speed than expected.

Unfortunately for Racing Point, Renault did not pit Riccardo and nor did Ferrari pit Charles Leclerc. Track position was king, and more important than tyre warm-up it seems, on a track that was always a bit tricky for overtaking.

Perez’s potential podium spot was gladly seized by Ricciardo who had the hard-charging Daniil Kvyat on his tail for good measure after a couple of excellent passes on the restart on fresh tyres. A hell of a drive from the Russian.

Perez could only muster sixth ahead of the two McLaren boys of Sainz and Norris who had a quiet day. One championship point now covers Renault, McLaren and Racing Point.

Without Gasly’s retirement AlphaTauri would have been perilously close to demoting Ferrari to seventh in the championship… Leclerc did another fine job and so did Vettel, but his decent race was spoiled when the team took 13.1 seconds to get the rear wheel on.

Hamilton smashed in the three fastest sectors of the race on the last lap to collect a full 26 points once again. After his bad start he did well to win this race, along with some luck. He even joined in with a ‘shoey’ on the podium with Ricciardo, something he said he’d never do.

When I did the podium interviews (seems like a long time ago since we were welcome anywhere near a driver) one day in Baku and tasted the ‘shoey champagne’ Lewis said to me ‘why drink that along with toe jam?’ which made me feel queasy.

Meanwhile Hamilton continues to tease and torment with comments such as ‘it’s not certain I’ll be on the grid next year’, when of course he will be.

It was wonderful to revisit Imola, the track looked great and did us proud, although unless we are in the same situation next year I can’t imagine us returning anytime soon.

Another anti-clockwise and hugely enjoyable track in Istanbul coming right up after a weekend off.