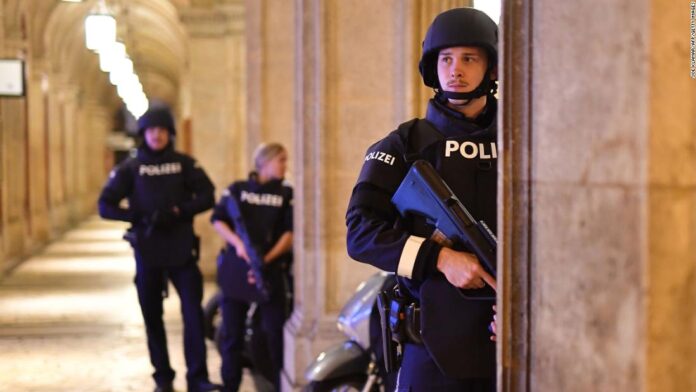 Austria’s Interior Minister Karl Nehammer has described the incident as a “terror attack,” and urged members of the public to stay indoors, as police search for the remaining attackers.
“We are still in battle against the would-be terrorists,” Nehammer said on Austrian broadcaster ORF on Monday night, adding that several suspects are armed with assault rifles. “We assume there are several heavily armed perpetrators.”
Gunfire erupted in the Austrian capital at six different locations in the center of the city around 8 p.m. local time on Monday, just hours before the start of a nationwide lockdown to combat a resurgence of Covid-19, according to police.
Vienna’s mayor Michael Ludwig said the attackers started randomly shooting at people in a busy district packed with cafes and restaurants near Vienna’s main synagogue, Seitenstettengasse Temple.
“We are trying to find out more about the perpetrators and keep the population safe,” he told ORF.
Oskar Deutsch, the head of Vienna’s Jewish community, said in a tweet that it was unclear whether the synagogue was a target, but that it was closed at the time of the shooting.
Police are urging people to avoid the area and not to share photos or videos on social media.
“Shots fired in the Inner City district – there are persons injured – KEEP AWAY from all public places or public Transport – don’t share any Videos or Fotos!” Austrian police said on Twitter.
The area was packed ahead of the midnight start of the lockdown, and footage shared on social media showed people running away from the scene.
Austrian Chancellor Sebastian Kurz said police will take “decisive action against the perpetrators of this hideous terrorist attack.”
“We are currently going through difficult times in our republic. I would like to thank all the emergency services who risk their lives, especially today for our safety,” Kurz said.
He added that the Austrian army has been deployed to help protect buildings and properties.
European leaders have strongly condemned the attack, expressing their shock and sorrow.
“After France, it is a friendly country that is under attack,” French President Emmanuel Macron said on Twitter. France has seen two terror attacks in recent weeks.
“Europe strongly condemns this cowardly act that violates life and our human values,” the President of the European Council, Charles Michel, said on Twitter.
This is a developing story, updates to follow

Stephanie Halasz and Tim Lister contributed to this report.