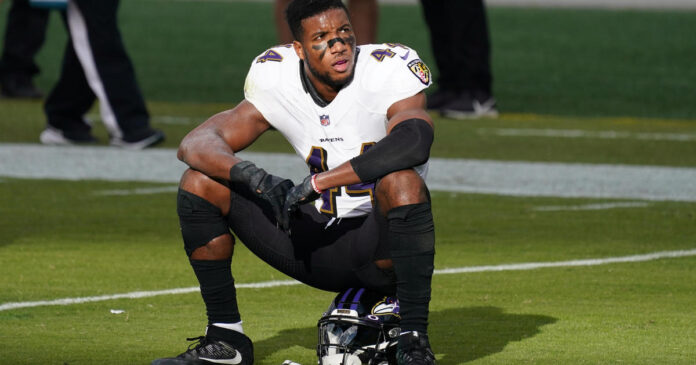 Baltimore Ravens cornerback Marlon Humphrey has tested positive for coronavirus, one day after his team lost to the Pittsburgh Steelers, the 24-year-old announced Monday.

“I got the Rona hopefully I’ll be back healthy soon,” the Pro Bowl corner tweeted.

Without naming Humphrey, the Ravens said one player tested positive for COVD-19 and that the player “immediately began to self-quarantine.”

“In coordination with the league, we have started the process of contact tracing and are following the guidelines of intensive protocol,” the team said in a statement. “The health and safety of our players, staff and community continue to be our highest priority. We will continue to work closely with the NFL and our team doctors and will follow their guidance.”

Humphrey played in every defensive snap during the Ravens’ 28-24 loss against the Steelers on Sunday, according to CBS Sports. However, a Steelers spokesperson, Burt Lauten, said the team’s results from Sunday’s testing have all come back negative.

Humphrey is considered a key piece on the standout Ravens’ defense. Last month, he signed a five-year, $98.75 million extension, making him one of the highest-paid cornerbacks in NFL history.

The Green Bay Packers also reported one positive test among players on Monday, just one day after playing the Minnesota Vikings.

Meanwhile, the Arizona Cardinals, who didn’t play on Sunday, said two players tested positive over the weekend. Linebacker Devon Kennard revealed he was one of the players. “I learned that like many others, I have tested positive for Covid 19. Thankfully, I feel completely normal so far. Please keep my family & I in your prayers as we navigate this,” he tweeted.

The Cleveland Browns on Monday said they’re conducting meetings remotely after an active player who was not at the facility was experiencing COVID-19-related symptoms. The team said no players, coaches or staff members have tested positive for the virus.