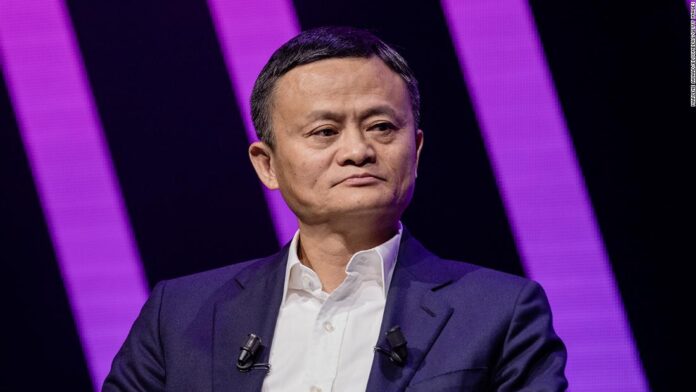 The People’s Bank of China and three other financial regulators “conducted regulatory interviews” with Ma, Ant executive chairman Eric Jing, and chief executive officer Simon Hu, according to a brief statement from China’s Securities Regulatory Commission.
The government statement didn’t go into detail. Ant Group confirmed on Tuesday that Ma and members of Ant’s management team met with the Chinese regulators.
“Views regarding the health and stability of the financial sector were exchanged,” the company said in a statement. “Ant Group is committed to implementing the meeting opinions in depth and continuing our course based on the principles of: stable innovation; embrace of regulation; service to the real economy; and win-win cooperation.”
The meeting was held days before Ma’s financial tech company begins trading in Hong Kong and Shanghai. The company’s IPO is shattering records, with a fundraising total that is already expected to reach $37 billion after it exercised an option to sell more shares to investors in Shanghai. The size of the deal could creep even higher if an option to sell more shares in Hong Kong is exercised.
It’s not entirely clear what was discussed at Monday’s meeting, given the vague statements from the regulator and Ant. But there are some clues to suggest that Ma and Ant could be on the receiving end of heightened regulatory scrutiny.
Just over a week ago, Ma called out global financial regulations for being outdated and publicly criticized Chinese regulators for stifling innovation.
China “lacks the risk of a healthy financial system,” Ma said at a conference in Shanghai.
“What we need is to build a healthy financial system, not systematic financial risks. To innovate without risks is to kill innovation. There’s no innovation without risks in the world,” he added.
The statements likely irked Beijing, according to Duncan Clark, author of “Alibaba: The House that Jack Ma Built” and chairman of investment advisory firm BDA China.
Chinese regulators “want to put out statements that they’re the ones in charge, the ones in control. No regulator anywhere wants to be irrelevant,” he said, adding that the decision to summon Ma and Ant’s executives could have served as “kind of a reminder, ‘Okay you’re having you’re fun, but we made you.'”
Separately from the Ant meeting, the China Banking and Insurance Regulatory Commission — one of the regulators that summoned the Ant executives — proposed new rules on Monday for online lenders. They included requiring online lending companies’ to provide at least 30% of funding for loans they make jointly with banks, and capping individual online lending amounts.
That means Ant will likely have to set aside more cash for the loans it facilitates, according to analysts at Bernstein. As of June, about 2% of the 1.7 trillion yuan ($254 billion) of loans “enabled” by Ant’s platforms are on the company’s balance sheet, according to the company’s prospectus.
“The regulatory Party Pooper is here — what timing!” Bernstein analyst Kevin Kwek wrote in a note on Tuesday.
Kwek described the banking regulator’s proposal, which was published online, as an “‘opinion seeking’ piece.” But he added that is “usually a precursor to formal regulations.”
The proposed rules “could mean more of [Ant’s] capital will have to be directed towards supporting the lending business versus other intended [areas], and will put more credit risk on its balance sheet,” he added.
Ant is an incredibly powerful tech company: Its payments app Alipay had 731 million monthly active users as of September, and it is used for every aspect of financial life in China, from investment accounts and micro savings products to insurance and credit scores.
The specter of a regulatory crackdown on Ant will be “incrementally negative” to the company’s IPO, Kwek wrote.
“Most investors will remain optimistic on Ant’s positive long term prospects. Investors might nevertheless revisit their assumptions of growth given the clear signs of regulatory intervention,” he added.
And at the end of the day, there is an understanding that the government and tech tycoons need each other, said Clark, the BDA China chairman.
“China needs the help of the entrepreneurs and the innovation they bring,” he said.
In 2018, Ma was outed as a card-carrying member of the Chinese Communist Party, when he was included on a list of 100 people honored for “outstanding contributions” to China’s economic transformation in the past four decades.