Home World Slovakia tested most of the country in two days. Here’s how they... 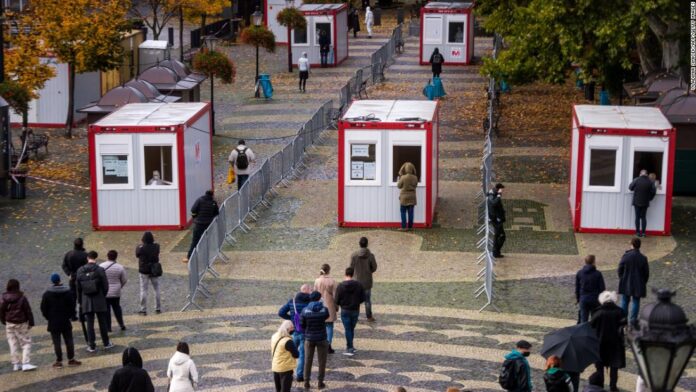 The European country decided to embark on the gargantuan quest to test everyone over the age of 10 after Covid-19 cases started spiking last month. Dubbed operation “Joint responsibility,” the program was the first attempt at large-scale blanket testing in Europe.
Just over 1% of those taking part tested positive, about 38,359 people in total, according to the official website of the program.
The program was first piloted on October 23 in Orava and Bardejov, two regions with the highest number of Covid-19 cases in the country. Nearly 141,000 people, 91% of those who were eligible, got tested in the two regions over the three days of the pilot.
In the rest of the country, the testing took place simultaneously on Saturday and Sunday. The government encouraged everyone older than 10 to take part in the voluntary program. People older than 65 years who spend most of their time at home, people with disabilities, cancer patients, immunocompromised people and other vulnerable groups were exempt.
Mike Tildesley, an infectious disease modeling expert at the University Warwick and a UK government scientific adviser, said that effective mass testing could be used in the long term as an alternative to lockdown to control the spread of disease.
“However, it is important to realize that just because someone tests negative it does not mean that they will necessarily be free from infection a few days later,” he said. “So any mass testing strategy needs to be carried out at regular intervals (every few days) in order to be an effective strategy and to allow some lockdown measures to be relaxed.”
The government said it was considering running a second round of the mass testing later this month, but no decision has been made yet.
The Slovak program used rapid antigen tests which provide results in minutes. Unlike the molecular diagnostic (PCR) tests, antigen tests don’t have to be processed in a lab, so they are faster and cheaper. But they can also be less reliable. While the PCR tests look for the virus’ genetic material, the antigen test looks for pieces of protein from the virus.
The Slovak military has been in charge of the testing campaign which required the deployment of 40,463 staff, including 14,500 health workers and 6,319 soldiers, to nearly 5,000 testing locations across the country.
The testing was voluntary, but those who decided to skip it will have to continue comply with stricter coronavirus restrictions and will not be allowed to leave their homes unless they are carrying out one of a few narrowly-defined exempt activities until Sunday.
Those who tested negative no longer have to comply with the strictest restrictions as long as they can prove their negative status with an official certificate. People who tested positive now have to quarantine — either at home, or in one of dozens of designated hotels across the country.
Slovakia’s Prime Minister Igor Matovic on Sunday praised those who were involved in the program. “Village and city mayors, civil servants, village or city deputies, soldiers, state, city and local police, firefighters and paramedics, health care workers, volunteers, and all of you, people of good will, who did your part this weekend and decided to fight for the health of our most vulnerable,” Matovic said in a Facebook post.
Matovic said that masks would continue to be mandatory in all public areas in Slovakia. Other measures, such as a ban on mass gatherings, will remain in place even after mass testing is completed.
Slovakia will also continue to be in an official state of emergency, which has been in place since October 1. The country has reported 61,829 cases and 219 deaths so far.

Germany will require companies to put women executives on their boards