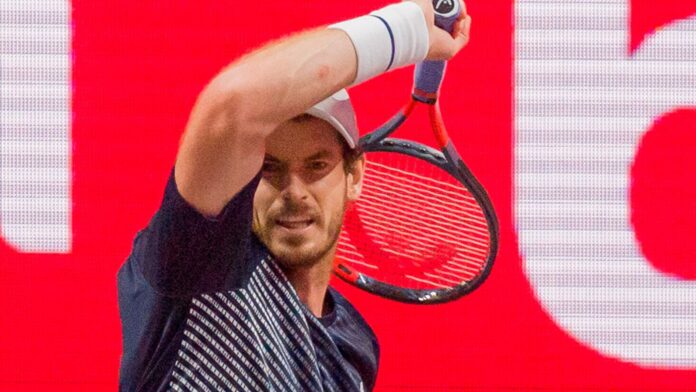 Former world No 1 Andy Murray is training at the National Tennis Centre in London and will hope that a strong block will enable him to finally play something approaching a full schedule in 2021. In Paris, Dan Evans is beaten by Stan Wawrinka

Andy Murray has brought his season to a close but is back in training following a pelvic problem as Dan Evans suffered an opening-round defeat at the Rolex Paris Masters.

Murray had been affected by tendinitis in his left psoas muscle, which connects the spine to the femur, since the US Open and pulled out of an ATP tournament in Cologne two weeks ago.

The possibility was raised at that point of Murray taking a wild card into this week’s Masters 1000 tournament in Paris but the Scot was absent from the list announced last week.

Murray will now prioritise preparation for the 2021 season.

He is expected to travel to Australia by mid-December at the latest in order to fulfil quarantine requirements.

The ATP Cup, which pits national teams against each other, could go ahead in some form but Murray’s lowly ranking of 118 means he would not be part of the Great Britain team.

He is almost certain to need a wild card for the Australian Open, which is due to begin on January 20 and is expected to be held in front of domestic fans.

At the Paris Masters, British No 1 Evans suffered another loss to Stan Wawrinka in the opening round.

Evans had lost all four previous clashes with his Swiss rival, although he had held match points in two of them, including in St Petersburg last month.

This was another close contest, with a single break of the Evans serve early in the first set proving the difference as 12th seed Wawrinka powered to a 6-3 7-6 (7-3) victory.

“Today I found it especially difficult,” said Wawrinka. “We’ve had some fans back in the stadiums and today it was pretty dead. Such a big court.

“He played good. I only just got here, I had one hit, it was very different from last week, different conditions, different balls. Not a perfect end to the year but it probably summed up the year of 2020 for tennis, it was flat.”

The 30-year-old has posted some of the best results of his career in 2020, beating eight top-20 players, a tally bettered only by Novak Djokovic and Dominic Thiem.

He struggled to be upbeat, though, saying: “It’s just tough to call 2020 a good year. So much has happened.

“There’s way bigger things than the tour but I just hope we can get things sorted for Australia and then hopefully after that there’s a bit more normality. That’s what I would hope for, get some tournaments where everybody’s back with no restrictions.”

Evans has also lined up a trial with Australian coach Chris Johnstone following his surprise split from Mark Hilton.

“Just speaking with him, I liked his method on tennis,” said Evans. “I’d seen him before with quite a few Aussie guys and girls. He’s in Australia, I just thought that could work really.

“He was pretty much the first person I thought could do the job. I’ll just give it a go.”