Home Sport ‘Whyte vs Fury anyone? It’s a phone call away’ 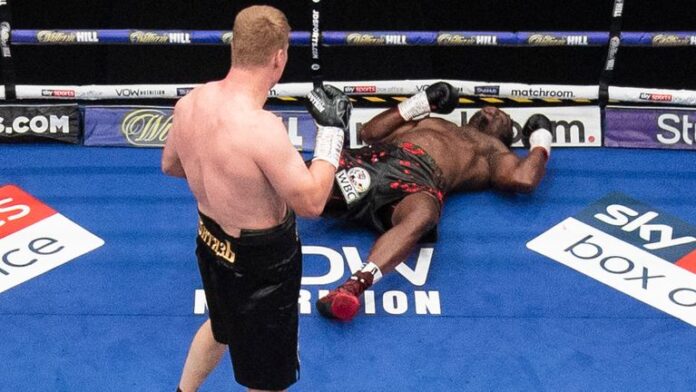 Dillian Whyte and Tyson Fury both without an opponent for November and December dates; Alexander Povetkin has tested positive for Covid-19 so his rematch with Whyte, set for November 21, has been postponed until next year; could Fury fight Whyte at short-notice?

Dillian Whyte would “jump into” a short-notice fight against Tyson Fury and negotiations to make it “wouldn’t be difficult”, says promoter Eddie Hearn.

Whyte’s rematch with Alexander Povetkin, scheduled for November 21, has been postponed to a targeted date of January 30 because the Russian has been hospitalised with Covid-19.

Fury still has no confirmed opponent for his first WBC heavyweight title defence in London on December 5.

Whyte’s promoter Hearn told Sky Sports News: “Fury is looking for an opponent, Whyte is ready to go. Why not?

“We would jump into that.

“Honestly, from our side, we wouldn’t be difficult in making that fight at all.

“I know Fury and his team are looking for an easy fight in December. I don’t blame them. They are just coming off the Deontay Wilder fight and are looking to fight Anthony Joshua next year.

“But Whyte is more than ready and willing to jump into that fight on December 5.

“It’s a phone call away.

“If Fury wants a real fight, [Whyte] is there. We would definitely be willing to have a discussion about that fight.

“Obviously if Fury wants a more straightforward fight, we understand that as well.

“Certainly we are looking to step in and take that fight.”

Whyte lost his status as the mandatory challenger to Fury’s WBC title when he was knocked out by Povetkin in August.

He immediately arranged a rematch to rescue his world title ambitions.

But Fury, meanwhile, scrapped a planned trilogy fight against Wilder claiming that his rival wanted to delay it until 2021.

Oleksandr Usyk has since emerged into the world title picture after outpointing Derek Chisora.

But Fury (WBC) and Anthony Joshua (IBF, WBA and WBO) plan to fight twice in 2021 to decide the undisputed heavyweight champion.

Joshua must first come through a title defence against Kubrat Pulev on December 12, live on Sky Sports Box Office.

Whyte must wait for Povetkin revenge

Whyte floored his Russian rival twice until falling foul of a vicious uppercut when they fought in August.

Povetkin’s hospitalisation means Whyte must wait until 2021 for payback.

“This is a challenging time for shows. There will be lots of ups and downs over the next few months. We look forward to the fight happening in late January.”

Povetkin’s promoter Andrey Ryabinskiy said: “The Povetkin-Whyte rematch has been postponed. Povetkin fell ill with a coronavirus infection and is now under the supervision of doctors in one of the Moscow clinics, taking care of his health.

“The course of the disease is normal: there is a fever, but there are no critical complications. We will hope that he will be able to recover quickly enough, but we think that the fight will only take place next year.

“There is no talk about changing the opponent at the moment. Povetkin will box with Whyte”.