Home World Messages from around the world on Election Day 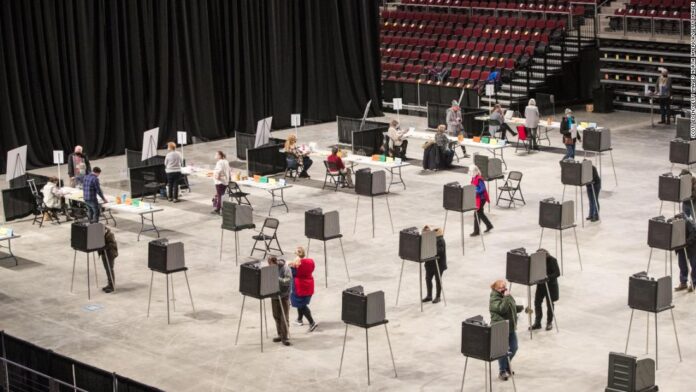 The most critical election in modern American history is here, and neither side trusts the data that shows Democratic nominee Joe Biden is the favorite and that the President has a narrower — but still clear — path to victory. Both sides are still fighting the last war — the one Trump won in 2016.
Many of Biden’s supporters are still churning through the trauma of the last presidential election night, when they went in expecting to celebrate America’s first female president, Hillary Clinton, and got an awful surprise. Every poll showing a minute tightening of this race, each warning by Trump that he’s got squads of lawyers poised to challenge the results, deepens the Democratic angst.
In public and on social media, Trump’s fans are adopting the towel-snapping bravado of his campaign, which insists that all the polls are wrong — just like last time — and that the President is racing toward another four-year term. Trump aficionados see flotillas, truck parades and big crowds in battleground states as sure signs of the President’s unstoppable momentum. They’ve also bought into the notion that yet-uncounted “silent” Trump voters are going to emerge from the heartland in the millions and carry him to victory. The President’s unexpected victory in 2016 and survival of both impeachment and Covid-19 have created an aura of magic around him. It helps that conservative media filter out unfavorable polls and paint Biden as an aged loser, too.
Whenever all the votes are finally counted, one side will be devastated. But after four years of acrimony, alternative facts, defiance of science and Twitter outbursts, it’s clear that one facet of American democracy — voting — is in strapping shape. More than 100 million people have already cast mail-in or early votes — the most ever, thanks to the pandemic. If another 40-odd million voters show up on Tuesday, the total vote count will set another record.
We’ll have to wait for the verdict. But at an extraordinary moment in history, Americans couldn’t be taking their democratic duty any more seriously.

Trump hasn’t finished his famous wall, but a “non-scalable” fence on 17th and H streets in Washington, DC, was erected around the the White House on Monday.

‘You didn’t have any auto plants four years ago’

Trump told a series of major whoppers Sunday in hopes of securing crucial votes in Michigan. Perhaps most bald-faced was his claim that the state “didn’t have any auto plants four years ago.” “This is obviously false,” writes CNN’s Daniel Dale. “Michigan, which has made cars for more than a century, never stopped having auto plants under Obama. There were 13 car or truck assembly plants in Michigan in December 2016, the last full month of the Obama presidency, according to an Automotive News plant directory — and there were still 13 such plants in Michigan in October 2020, according to the publication’s directory from last month.”

We asked readers to send their wishes for Americans on Election Day. Here’s what you said:
“As an outsider closely following this election, I honestly believe that the vast majority of Americans are smart enough to see through the chaos, have a basic sense of right and wrong, and will vote for stability and reconnection with traditional allies. Good luck, America,” wrote Ian.
Sabine in Germany wrote, “I am so impressed with U.S. voters’ stamina and perseverance, waiting in line for hours and facing even active threats and suppression. Making voting hard is unimaginable in Germany, every adult is a registered voter and receives an invitation for every election, polling places are abundant and mail-in is no problem at all. I haven’t missed an election for my whole life and I had never waited more than 10 minutes.
I cannot imagine us in Germany to show so much commitment in the face of such adversity. Chapeau!”
“Good luck to the US from Australia where we have compulsory voting. We really feel for you and hope for a peaceful election and aftermath,” said Jane.
Christopher in Nigeria saw a parallel with his own country, and a warning for Americans. “When I see what Trump and his supporters are doing, it reminds me of the Nigeria way of politics. It is a shame to see how Trump runs America and how he uses his power to subdue any official who speaks against him and his method of leadership. I wish America the best and I hope America democracy doesn’t end like Nigeria democracy,” he said.
Many readers said they felt personally involved this time. From South Africa, Ralph wrote, “I hope and want American voters to vote with their conscience, knowing that their vote not only affects America but also affects the world. I hope many Americans flood the polls and exercise their democratic right to have a say in their country.”
Les in New Zealand seconded the thought. “A plea to American voters. Choose well and with care, and an eye on the future. The future of all of the global citizens. You could say for this election, we are all American citizens (metaphorically),” he wrote.
“It honestly scares the S### out of me, and I live in Canada. I would really like to feel better, and I’m trying to be positive, but somehow or other, it isn’t working. You all stay safe,” Pattie said.
And Robert wrote, “As a non-American (even as a next door neighbor) it would be inappropriate to comment on another country’s sovereign democratic process, but it is worth remembering what President John Adams had engraved on the White House fireplace: ‘I pray Heaven to bestow the best blessings on this house and all that shall hereafter inhabit it. May none but honest and wise men ever rule under this roof.’ “

Nordstrom’s Huge Black Friday Sale Is Here to Save You from...