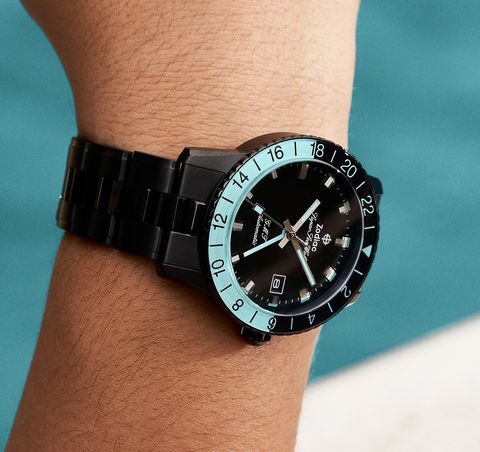 In the 1960s, watch brand Zodiac pioneered the accessible diving watch just as the sports of scuba and skin-diving were growing in popularity. Expanding air travel from the mid 1950s onward quickly began to shrink the globe, meaning more and more people had access to the luxury of foreign vacations. The Sea Wolf had been launched in 1953 at the same Basel Watch fair as that behemoth of the dive watch world, the Blancpain Fifty Fathoms.

Yet while Blancpain lived in the milspec space, Zodiac was for the people. A ’50s ad for the Sea Wolf showed a snorkeling couple alongside he-and-she-sized dive watches. As time went on, Zodiac would experiment with the design. In the late ’60 and early ’70s, a distinctive lugless version emerged, but Zodiac played most effectively with funky colored bezels or chapter rings in orange, aqua blue, and cream.

The watch comes with both a blackened steel bracelet and Zodiac’s popular Tropic strap.

The past few years have seen Zodiac, spurred on by a passionate fan base, find renewed interest in its own back catalog and return to some of its classic watches of that golden era. The Super Sea Wolf GMT was introduced in 2020 in steel, with an unmissable orange-and-cream coloration on the bezel, the kind of color play you’d expect from one of Zodiac’s vintage creations. It was actually a fusion of two period classics from the brand: both the Sea Wolf and the Aerospace GMT, a watch from 1966 with the useful added functionality of a second time zone indicator. 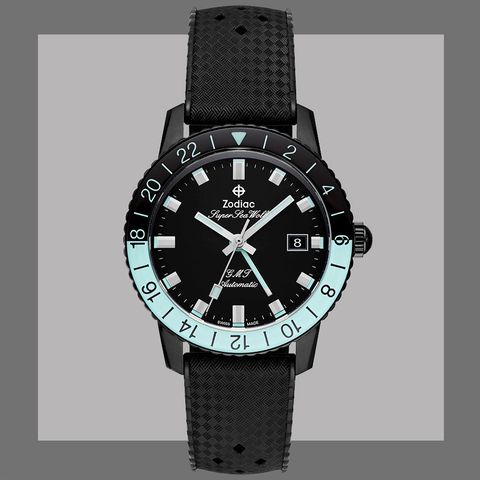 Yesterday, Zodiac unveiled a special, limited edition of 82 Sea Wolf GMT watches, with Timeless Luxury, a watch specialist in Dallas, Texas. This unique “Blackout” version comes in standard 40mm diameter, but with the case and bracelet in blackened steel and a half-black, half-aqua blue bezel that harks back to that colorful past. A textured rubber strap and changing tool are also included. For now, it is available only through Timeless Luxury’s site, but it’s sure to find an enthusiastic market amongst Zodiac collectors. Run, don’t swim. 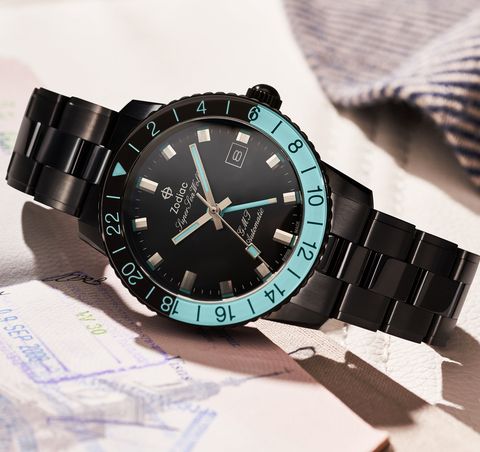 The half-black, half-aqua blue bezel blends Zodiac’s colorful past with modern aesthetics.
Nick Sullivan Nick Sullivan is Creative Director at Equire, where he served as Fashion Director from 2004 until 2019.

Koepka one ahead at WGC in Florida

Lady Gaga’s French bulldogs found after being stolen by men who...

Backstage With… the Golden Globe nominee who prayed to get out...

‘Hearing Jamal’s murder would make it a shock horror – I...