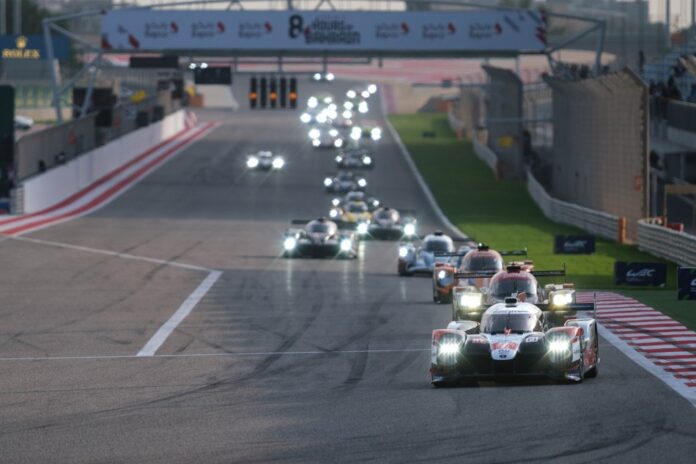 On Saturday 14 November the 2019/20 FIA World Endurance Championship season will come to an end in the Middle East. With the destination of the LMP1 and LMGTE manufacturer and the Team and Driver titles in LMP2, the 8 Hours of Bahrain will be the deciding round for who will win the remaining ones, including the World Endurance Drivers’ Championship titles in both LMP1 and LMGTE.

The race in Bahrain will feature 24 cars run by 15 teams and driven by 66 drivers from 22 different nations from around the globe.  As in previous years the race will start in the late afternoon, with the majority of the event taking place under the floodlights in the desert.

The LMP1 grid will be the final race for the Toyota Gazoo Racing TS050-hybrid and will bring the LMP1 hybrid era to a close with the introduction of the Hypercar class in 2021.  While the LMP1 teams title has already been won by Toyota, the 8 Hours of Bahrain will decide which of the two Toyota crews will be crowned as 2019/20 World Champions.

The crew of the no8 car, Brendon Hartley, Kazuki Nakajima and Sebastien Buemi are currently on 175 points, 7 points ahead of the crew of the no7 Toyota – Jose Maria Lopez, Kamui Kobayashi and Mike Conway.  The EoT for the final race favours the no7 car so there is all to play for in Bahrain.

Should the no7 Toyota win the race and the world title, Jose Maria Lopez, who won the WTCC title in 2014, 2015 and 2016 with Citroen, would join Fernando Alonso and Petr Solberg as drivers who have won FIA World Championships in two different disciplines.

Bahrain will also see a fraught three-way title fight for the LMGTE FIA World Endurance Drivers’ Championship between the two Aston Martin Racing no95 and no97 crews, as well as the no51 AF Corse Ferrari 488 GTE Evo entry.

Following three wins already this season, Marco Sørensen and Nicki Thiim currently top the leaderboard – 15 points ahead of 24 Hours of Le Mans winners Alex Lynn and Maxime Martin in the sister Aston Martin Vantage AMR.  However, there is still a mathematical chance for 2017 Champions James Calado and Alessandro Pier Guidi to steal the drivers’ trophy should either of the AMR entries falter – the duo are currently 26 points adrift of the lead.

After taking victory at the 24 Hours of Le Mans in September, the no22 United Autosports Oreca-Gibson secured the LMP2 title with one race remaining, with Phil Hanson and Filipe Albuquerque taking a unique treble of FIA WEC, 24 Hours of Le Mans and European Le Mans Series driver titles in the same season.

However, the fight for second and third positions in the championship is wide open with a total of four teams still eligible for podium places.  JOTA is the front-runner with an 18-point lead over nearest rivals Racing Team Nederland but with a maximum of 39 points still on offer in Bahrain, Jackie Chan DC Racing and Signatech Alpine Elf are all still within reach.

Finally, LMGTE Am sees a healthy field of ten entries for the WEC season finale and both the team and driver titles are still to be decided.

TF Sport (No. 90 Aston Martin Vantage AMR) and AF Corse (No. 83 Ferrari 488 GTE Evo) will go head-to-head with just eight points between them.  TF Sport drivers Charlie Eastwood, Jonny Adam and Salih Yoluc are also leading the battle for the Drivers’ trophy on the strength of their Le Mans win. However, they face stiff competition from 2016 Champions Emmanuel Collard and François Perrodo, together with Nicklas Nielsen, who are just eight points behind.

The 8 Hours of Bahrain takes place on Saturday 14 November with Free Practice and Qualifying on Thursday 12 and Friday 13 November.