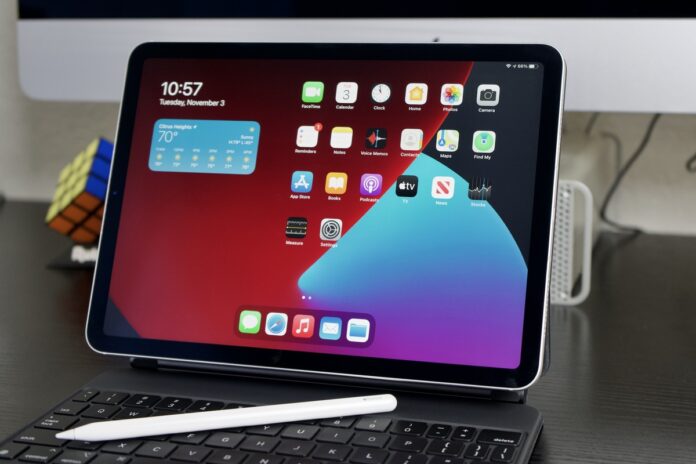 Last spring, Apple revived the iPad Air branding after letting it lie dormant for several years. The 2019 iPad Air was a great compromise between the affordability of the standard iPad and the performance and features of the far more expensive iPad Pro.

The new 2020 model continues in that tradition. It’s more expensive than the 2019 version, but incorporates more of the Pro’s features and design and offers a substantial leap in performance.

With a starting price of $599, it’s not quite the bargain the 2019 Air was at $499, especially when you start tacking on accessories like the Apple Pencil or Magic Keyboard. Still, it’s a better buy than the iPad Pro for most people and a big step up from the standard iPad.

As with the iPad Air from 2019, the 2020 model takes some cues from the iPad Pro, including a wide color display with True Tone support, but this year’s Air borrows a lot more.

Apple has shifted the iPad Air to the iPad Pro’s flat-edged design, ditching the home button in favor of a bigger display with smaller bezels all around. It’s exactly the same size as the 11-inch iPad Pro, and even supports the Magic Keyboard made for that model.

Like with the iPad Pro, the iPad Air now has a USB-C port instead of a Lightning connector, which means easier access to external storage devices and cameras. Last year’s iPad Air supported the first-generation Apple Pencil, while this year’s model supports the second-generation Pencil. It costs $30 more, but the magnetic attachment and charging is a much better design.

The 8-megapixel f/2.4 camera has been swapped out for an upgraded 12-megapixel f/1.8 camera that takes much better photos and videos. The front camera is nicely improved, too, and also supports 1080p FaceTime calls.

But you don’t get everything you get in an iPad Pro. That improved front camera is not accompanied by the TrueDepth module for Face ID and Animoji. Instead, Apple has incorporated a Touch ID sensor into the top button (as there is no more room around the bezel for a home button).

It’s a good solution that works very well, and is easier to engage when your iPad is propped up on a keyboard or stand, but it’s still inferior to Face ID. It also means no Portrait mode selfies.

You also don’t get the additional ultrawide camera on the back, nor the LiDAR scanner. Those are honestly of less use to an iPad than an iPhone, so you’re not missing too much.

The iPad Pro starts at 128GB of storage with options up to 1TB, while the iPad Air starts at 64GB with only a single 256GB upgrade option (for an extra $150).

Perhaps the most easy-to-miss feature of the iPad Pro that is missing from the Air is the ProMotion 120Hz display, which is slightly brighter, too.

All told, the iPad Air has most of what you would want out of the iPad Pro at a starting price $200 lower. For most users, it’s a no-brainer. The base iPad model is only $329, but inferior to the Air in almost every way.

Perhaps the most interesting facet of the new iPad Air is that it’s powered by Apple’s A14 processor, the same as the just-released iPhone 12 Pro. That puts the Air in sort of a strange position, as it’s actually faster in some meaningful ways than the iPad Pro with its A12z.

In our tests, single-core CPU performance is better on the A14, as is GPU compute. And while we don’t have a benchmark for it, the Neural Engine used for machine learning and AI code should be much faster on the A14 as well.

On the other hand, 3D graphics performance is substantially higher on the A12z, and multi-core performance is still a little bit better. If you’re interested in an iPad Pro, you might want to wait for Apple to release one with an A14X processor in it, at which point it will once again represent a huge performance leap over the iPad Air.

The one exception is battery life. In our tests, which involve setting the display to a fixed 200 nits and running the Geekbench 4 battery benchmark until the battery dies, we found the old iPad Air lasted roughly half an hour longer. It’s only about an 8 percent difference and not worth stressing over, though we always want more battery life in newer products, not less.

Better bang for your buck

With this year’s revision of the iPad Air, Apple increased the starting price from $499 to $599 while still giving you 64GB of storage.

Despite the price hike, the 2020 iPad Air gives you more bang for your buck. It’s a lot faster—we expect that with the natural progression of chip design and manufacture—but it’s got a lot of other benefits, too.

It now copies the superior iPad Pro design, with flat edges, a USB-C port, second-gen Apple Pencil support, and compatibility with the excellent Magic Keyboard. It’s got better cameras on front and back, and slim, symmetrical bezels around the display.

The new iPad Air is an obvious leap over the regular iPad, one that you’ll appreciate even if you don’t need faster performance. Less obvious is the need to spend $200 more for an iPad Pro. Only those who really need “pro” performance and lots of storage will really want to pay that premium, and then only after Apple releases an iPad Pro with something faster than the A12z processor.