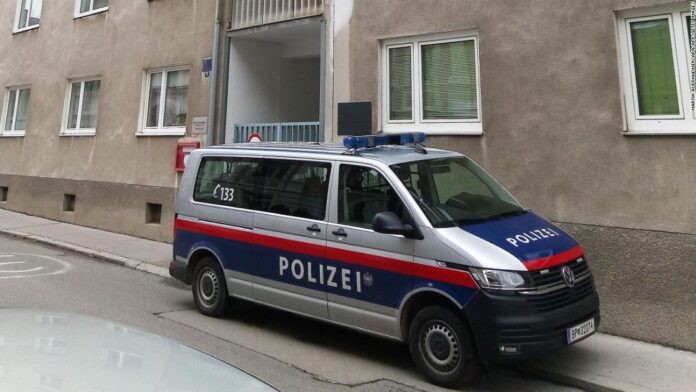 At least four people were killed and a further 22 were injured, including a police officer who is now in a stable condition after surgery, in the attack Monday across six locations in the Austrian capital.
Authorities have identified the attacker as Fejzulai Kujtim, a 20-year-old Austrian man from the town of St. Poelten, 33 miles west of Vienna and the capital of Niederoesterreich state.
The latest suspects to be arrested were detained Tuesday in St. Poelten following a police search of two apartments, ORF said, adding that the two men are aged between 20 and 25 years old and live with relatives.
One of the two has North Macedonian roots, and the other Chechen, the broadcaster said. Both are said to have had contact with the Vienna attacker in the past, according to ORF.
Police in Switzerland arrested two Swiss citizens in connection with the attack on Tuesday night, but their links to Kujtim were not confirmed.
Interior Minister Karl Nehammer told a news conference earlier Tuesday that 14 suspects had been provisionally arrested following 18 house searches in Vienna and Niederoesterreich.
There are no indications of a second perpetrator for the time being, said Nehammer.
“You can imagine that some evidence has been secured here that needs to be sifted through,” said Vienna State Police President Gerhard Puerstl at the same news conference.
“Interviews must also be carried out. It is important to establish a connection between these people and the assassin,” Puerstl said, adding that this would take a long time.
People began to return to the streets of central Vienna on Wednesday morning, although coronavirus pandemic restrictions mean many are working from home. Authorities had advised residents to stay at home on Tuesday amid fears that further perpetrators might be on the loose.
Kujtim was shot dead by police who responded to Monday night’s shootings. He was wearing a fake explosive belt at the time of the attack, according to Nehammer, and had been “radicalized.”
Kujtim was sentenced to 22 months in prison on April 25, 2019 for attempting to travel to Syria to join ISIS, Nehammer told state news agency APA. On December 5, he was released early on parole, it reported.
Austrian chancellor Sebastian Kurz told CNN on Tuesday that his country was not only looking to combat terrorists, but also the ideology behind them.
In an interview with CNN’s Fred Pleitgen in Vienna, Kurz said there was one gunman and “probably he was alone.” Authorities had previously feared that the perpetrator didn’t act alone and that another gunman might be at large.
Kurz confirmed the gunman was born in Austria and had a family background from Northern Macedonia. “What we know is that he is a supporter of the Islamic State,” he said.
ISIS claimed responsibility for the attack on Tuesday, calling the shooter “Abu Dujana Al-Albany” and claiming that he used two guns, including one machine gun, and a knife, in the assault, according to a statement posted on the encrypted messaging app Telegram.
The initial attack, which began around 8 p.m. Monday, was centered on the busy shopping and dining district near Vienna’s main synagogue, Seitenstettengasse Temple, which was closed.
The five other locations were identified as Salzgries, Fleischmarkt, Bauernmarkt, Graben and Morzinplatz near the Temple, according to an Austrian law enforcement source speaking to journalists on Tuesday.
Vienna mayor Michael Ludwig said shots appeared to be fired at random, as people dined and drank outside due to the warm weather and virus concerns.
Following reports of gunshots, armed police quickly swarmed the area, with helicopters and ambulances deployed. Police could be seen patrolling the city center, ordering people to stay inside bars and restaurants.
A Palestinian man, Osama Abu El Hosna, helped rescue a police officer who was injured during the operation, his lawyer told CNN. “He could have run away, but he stayed, and he dragged the policeman behind a cement barrier so that he’s not in the line of fire any more,” lawyer Muna Duzdar said.
Analysis by Tim Lister, CNN

Austrian investigators will want to establish what motivated Kujtim to launch his attack.

Monday’s assault came amid renewed controversy in Europe over cartoons of the Prophet Mohammed. In 2015, terrorists attacked the offices of the French satirical magazine Charlie Hebdo (which had published the cartoons), killing 12 people.

A French history teacher was murdered last month by a young Chechen in Paris after showing images of the cartoons to a class. France’s President Emmanuel Macron launched an unsparing defense of French secularism and said “the problem is Islamist separatism.”

Whether Kujtim was angered by the cartoons is at this stage unclear. He had clearly been radicalized several years ago, according to authorities. And the history of that radicalization will now be a focus of investigation.

“The paramedics didn’t dare to drag him out and to get right into the barrage of gunfire, so that’s when he ran back to get the officer out of there, and then the two guys from Turkey helped because he couldn’t have done it by himself,” she added. “Together, they dragged him to the ambulance.”
Reuters and Turkish news agency Anadolu reported Tuesday how two Austrian mixed martial arts (MMA) fighters of Turkish descent had helped save a police officer and two women during the attack.
Like many European countries, Austria experienced a surge in young radicalized Muslims trying to join ISIS in Syria between 2014 and 2017, before the terrorists’ self-declared caliphate collapsed.
The United Kingdom raised its terror threat level from substantial to severe on Tuesday, a day after the attack in Vienna.
“This is a precautionary measure and is not based on any specific threat. The public should continue to remain vigilant and report any suspicious activity to the police,” UK Home Secretary Priti Patel said in a tweet.