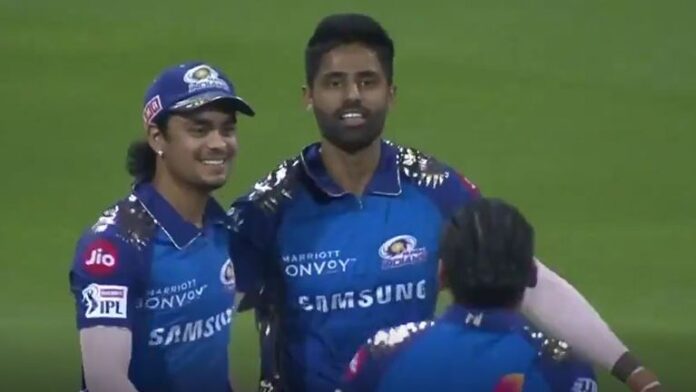 The IPL play-offs are upon us with Mumbai Indians, Delhi Capitals, Sunrisers Hyderabad and Royal Challengers Bangalore battling it out for the title in the UAE. Who will come out on top? Watch every game live on Sky Sports Cricket to find out

After nearly seven weeks of enthralling T20 cricket, the group phase is over and the most remarkable IPL campaign there has been is blasting its way towards another exhilarating finale.

Of course, it is the lack of fans that will immediately stand out when this year’s tournament is looked back upon in years to come and while they have been missed, the quality of play has been in no way diminished.

Throughout the tournament, the players have seemed determined to give something back to the supporters – quite literally early on in Sharjah, as ball after ball was smashed out of the stadium and swiftly gobbled up by opportunistic fans, weaving in and out of traffic to retrieve them from the streets outside – and treated them to a plethora of breath-taking matches and fascinating individual contests.

At the end of it all four teams are gone and four remain as we enter the play-offs. The drama is only just getting started!

How does the play-off system work?

Before we look at the teams competing in the IPL play-offs, first we let us go over how they actually work; it’s not as simple as a straight knockout.

It starts with Qualifier 1 on Thursday with the top two sides from the group stage facing off for a place in the final.

Friday sees the Eliminator, contested by the teams who finished third and fourth. As the name suggests, this is a straight knockout situation, win or go home.

The winners from the Eliminator progress to Qualifier 2 on Sunday, where they will play the losing side from Qualifier 1. Again, this is a simple knockout with the winners going through to the final.

The final will take place on Tuesday in Dubai.

Who has made it to the play-offs?

The defending champions are traditionally slow starters and began the tournament with a defeat to Chennai Super Kings. Going into the final round of matches, it was only Mumbai and Chennai not sweating over their play-off spot. But while for CSK that was because they were out of the running, Mumbai had already sewn up top spot.

There is a reason Mahela Jayawardene’s side are always included among the favourites, having put together a side not only packed with a great blend of Indian talent and overseas stars, crucially they have also created a superbly balanced side.

Captain Rohit Sharma is back after missing a number of games with a hamstring injury but with three half-centuries apiece for Ishan Kishan and Suryakumar Yadav and four for Quinton de Kock this campaign, not to mention the big-hitting of Hardik Pandya and Kieron Pollard, who are striking at 174 and 193 respectively, you fancy that even without one of the best white-ball batsmen on the planet, Mumbai still have the firepower to challenge.

Add to that a bowling attack that features the fantastic Jasprit Bumrah – dangerous at any stage of the innings and economical with it – as well as Trent Boult, Pollard and very useful spinners in Krunal Pandya and Rahul Chahal. If they’re on their game, they will take some stopping as they target a fifth IPL title.

They will have their first chance to reach the final in Qualifier 1 on Thursday.

Trying to stop Mumbai in that first play-off game will be the Capitals who, after years struggling to progress from the group in their previous guise of the Delhi Daredevils, have assembled a group of players capable of taking a first IPL title back to the Indian capital.

The problem is that they are woefully out of form. They were at least able to end a run of straight defeats with victory in their last game to secure a top two finish, so head coach Ricky Ponting will hope that they are heading back in the right direction.

That they were able to finish second despite four losses on the bounce is testament to Delhi’s excellent start to the tournament. Young opener Prithvi Shaw made two early fifties before the runs dried up and he lost his place in the side, Marcus Stoinis played a couple of brilliant knocks but his form has faded while skipper Shreyas Iyer and Rishabh Pant have had their moments but lacked consistency.

That leaves Shikhar Dhawan, the left-handed opener made a steady start to the competition before exploding into life with back-to-back centuries. He’s also added three fifties and with uncertainty about the make-up of the rest of the top order, he is likely to be key to Delhi’s chances.

In the bowling department, the spin of Axar Patel and Ravichandran Ashwin has been handy but perhaps the most decisive factor in whether Delhi can go all the way will be how South African speedsters Anrich Nortje and Kagiso Rabada perform.

The fast bowling pair have been brilliant, taking 44 wickets between them, and if they are at their best then they can make life difficult for any batting line-up.

Oddly for a top four, Sunrisers are the only team coming into the play-offs in particularly good form. David Warner led his side to three wins on the spin to take them from the brink of elimination to third place. Same again and they’ll be champions.

As has been the case for the last couple of years, Sunrisers possess an explosive opening pairing. However, this year there has been a controversial change in personnel mid-season with Jonny Bairstow, having passed 50 three times in 11 innings with a top score of 97, dropped and replaced by Wriddhiman Saha at the top of the order.

Perhaps more would have been made of it were it not for the fact that Saha has excelled alongside Warner, hitting two half-centuries and averaging 71.33 with a strike-rate of 139.86 after four innings. Warner himself has been consistent as ever, notching four fifties and Manish Pandey has three to his name.

It is perhaps Kane Williamson who Bairstow now has to try and displace for an overseas player spot but the New Zealander is a proven world-class performer and perhaps more suited to batting in the middle-order.

The reason both can’t get in the side is because of the other two overseas players in the XI: Rashid Khan and Jason Holder. There is not much more to be said about Rashid, he is just a class act. The leg-spinner is the world’s No 1 T20 bowler, has taken 19 wickets at 15.57 in this year’s tournament and is going at less than a run-a-ball.

As for Holder, the West Indies skipper came in relatively late in the group stage to bolster an attack shorn of the injured Bhuvneshwar Kumar and Vijay Shankar and with his ability to hit a long ball late in the innings as well, has provided some much needed balance to the Sunrisers line-up.

Will it be enough for them in the Eliminator?

If Sunrisers roared over the finish line in the group, RCB nosedived and were fortunate to cross the line before they crashed. Four defeats on the spin is not the sort of form you want to be taking into an Eliminator, especially not against a side with the momentum of Sunrisers.

If any team has the talent to turn it on on the big stage though, it is RCB. In world cricket’s most glamorous T20 league, they have long been considered the glamour side with a star-studded line-up led by Virat Kohli and AB de Villiers. They have never won the IPL though, with the accusation often being that they focussed too much on stars, batsmen in particular, and when they didn’t produce, those around them were unable to pick up the slack.

This year it all seemed a bit different. They had invested in other areas, they had the bowlers to complement the excellent Yuzvendra Chahal, all-rounder Chris Morris was a big-money addition but helped to balance the side; it all seemed more team-focussed – and early on it worked.

Even after a poor spell, all of those things are true and having the reached the knockout stage, the star quality of Kohli or De Villiers is enough that it could win them any game on its own.

On top of that opener Devdutt Padikkal has been one of the finds of the tournament and has shown that he can be relied upon while spinners Chahal and Washington Sundar can squeeze and threaten opposition batting orders in equal measure.

Can they put it all together though when it really counts? We will soon find out, starting on Friday with the Eliminator against SRH.

Watch every ball of the IPL play-offs live on Sky Sports Cricket, starting with Qualifier 1 between Mumbai Indians and Delhi Capitals from 1.50pm on Thursday.