Home Sport The genius behind the 49ers’ running game 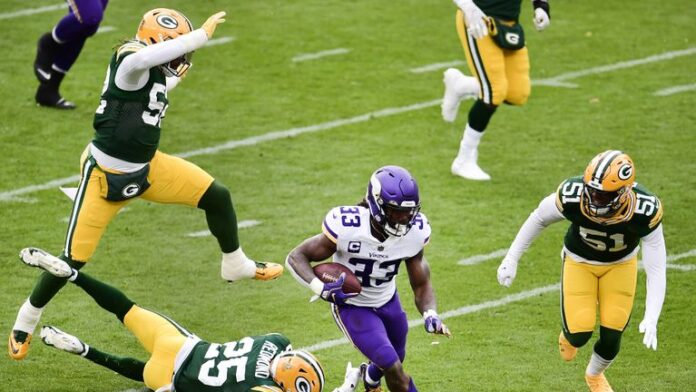 Kyle Shanahan previously blocked interview requests for him, while George Kittle wanted him as part of his contract. Run game coordinator Mike McDaniel is the offensive mastermind behind the San Francisco 49ers’ rushing excellence.

Tight end George Kittle joked earlier this year he wanted the run coordinator included in his contract, 49ers head coach Kyle Shanahan claimed he is as vital to him as anybody he works with and running back Jerick McKinnon accompanied teammate Kyle Juszczyk on social media to rejoice over the news McDaniel would be staying put in San Fran in 2019.

Former Cleveland Browns wide receiver Andrew Hawkins, who worked with McDaniel in 2014, added that he would “bet every dollar in my account that no other candidate understands offensive football the way he does” amid the annual coaching hunt around the league last year.

The 37-year-old Yale graduate has grown to become a trusted right hand to Shanahan, the pair having worked together with the Houston Texans, Washington, Cleveland Browns and Atlanta Falcons before heading to the 49ers in 2017.

It’s why Shanahan deems him indispensable and it’s why McDaniel is poised to follow in his footsteps as one of the NFL’s most creative offensive play-callers in years to come.

McDaniel interned for Kyle’s father Mike Shanahan with the Denver Broncos in 2005, his knowledge of technology seeing him tasked with adding overlays to game film. When you spend hours every day watching tape of a Shanahan team, you’re bound to come away a more intelligent football mind.

His entry shared parallels with that of Kyle, who would spend 12 hours a day breaking down film and incorporating the software program SuperPaint while drawing up plays as assistant coach for offensive quality control to Jon Gruden with the Tampa Bay Buccaneers in 2004. Both are modern innovators in every sense.

It’s no stroke of luck that the 49ers’ run game has been able to survive a string of high-profile injuries over the past two seasons.

McDaniel has garnered a reputation for polishing undrafted unknowns into ‘who’s this guy?’ commodities, at the same time accentuating a lack of value to drafting running backs in early rounds.

The 49ers’ run scheme harnessed and often mastered the art of misdirection in 2019 as McDaniel and Shanahan dealt out lessons in zone blocking and deception of the eyes with a rushing attack that ranked No 2 overall, behind only the Lamar Jackson-inspired Baltimore Ravens.

San Francisco led the NFL with 23 rushing touchdowns and for just the second time in franchise history had three players put up at least 500 rushing yards in a single season with Raheem Mostert, Matt Breida and Tevin Coleman.

When the latter two missed time through injury, McDaniel made a star of Mostert, who led the team with 772 yards for eight touchdowns on the ground as the subject of an incredible revival story having been cut by six teams since going undrafted out of Purdue in 2015.

A journeyman soon became the starting back at a Super Bowl, Mostert helping the 49ers reach Miami with 220 rushing yards for four touchdowns in the NFC Championship game against the Green Bay Packers.

Breida, undrafted out of Georgia Southern in 2017, followed him with 623 rushing yards for a score having led the 49ers with 814 yards for two touchdowns in 2018.

Subterfuge became a staple of the 49ers offense, ghost routes and jet sweeps from the likes of Deebo Samuel and Emmanuel Sanders exposing coverages, stretching defenses from east to west, perplexing linebackers and often handing offensive lineman advantageous blocking angles as defenders tiptoed left or right to follow their motioning.

Zone blocking efficiency was meanwhile boosted by the dedication and execution of Kittle and fullback Juszczyk to cracking every obstacle in their path, unleashing the track speed and patience of a Mostert, a Breida or even a multi-purpose Samuel to punch the right hole at the right time.

No offense used pre-snap motion more than the 49ers, McDaniel even turning Juszczyk into one of the most impactful players without the ball as he shifted from decoy receiver to halfback to outright blocker at the line of scrimmage.

On occasion McDaniel would fake the outside zone and instead hand it off to Samuel on the revere, Kittle and Juszczyk peeling off to serve as bulldozers clearing a path on the end-around.

The scheme’s success was also testament to recruitment, Kittle and Samuel in particular fitting the blueprint of Shanahan and general manager John Lynch to perfection.

Rookie wide receiver Brandon Aiyuk also falls into that category having set out to establish himself as not only a powerful weapon in the open field, but an astute runner capable of fulfilling the kind of ‘Deadpool’ package built around Samuel’s versatility.

So far in 2020 Kittle has missed two games and is set to spend an extended spell on the sidelines after suffering a small fracture in his foot against the Seattle Seahawks in Week Eight. Mostert and Samuel have missed four games each, while Coleman has managed just three outings.

Besides injuries to skill positions in 2020, McDaniel has also had to contend with changes to the offense line. Guard Mike Person was released in April, tackle Joe Staley retired after 13 seasons and center Weston Richburg was placed on the reserve/PUP list at the beginning of the season.

It’s been a major test of McDaniel’s ability to uphold what the 49ers do best on offense.

With Mostert and Coleman out and McKinnon limited, Week Seven saw him turn to Jeff Wilson, who weaved and scooted his way to 112 yards rushing for three touchdowns off 17 carries in a win over the New England Patriots.

Wilson had previously recorded just 105 yards for four touchdowns off 27 carries in 2019 having rushed for 266 yards off 66 attempts after going undrafted out of North Texas in 2018.

In week three Wilson had been deployed as a threat in the open field, the 24-year-old making three catches for 54 yards and a touchdown in a win over the New York Giants.

He became the latest case of McDaniel refuting reputation and background by exploiting a player’s strengths, something that has been a feature to Shanahan’s entire coaching staff.

The Wilson experiment had to be put on hold after he was placed on injured reserve due to the high ankle sprain he sustained while running in his third touchdown against the Patriots.

And with that came his next project. Enter JaMycal Hasty.

The undrafted rookie started the year on the practice squad and notably rebuffed offers from other teams in favour of fighting his way into this running back club, McDaniel’s ‘next man up’ policy and evident success clearly a motivating factor.

He snuck his way to 57 yards off nine carries behind Wilson’s standout day against New England, before rushing for 29 yards and a score from 12 attempts as the lead back in the loss to the Seahawks, who produced one of their most accomplished defensive performances of the season so far.

In a schematic sense, McDaniel’s record of allowing his backs to shine is quite remarkable. In a leadership sense, the ability to secure unwavering dedication from personnel without the ball to a disciplined and often complexed approach bodes extremely well for his head coaching prospects.

Shanahan blocked the Arizona Cardinals from interviewing McDaniel for their offensive coordinator vacancy in 2019, while the Cleveland Browns were also said to be interested in his services at the start of 2020.

The NFL have since adjusted the rules so that teams are no longer permitted to stop assistant coaches from being interviewed for coordinator jobs elsewhere.

McDaniel wrote the words “I will make it” on the inside of his Little League helmet in seventh grade, purposely omitting any reference to playing in acknowledgment of both his size and an early intrigue in coaching.

Though he has made a point of being in no rush to take the next step, becoming an offensive play-caller is very much on the to-do list. And at this rate, the 49ers could have a hard time keeping hold of him.

Watch the Green Bay Packers @ San Francisco 49ers live on Sky Sports NFL from 1:20am in the early hours of Friday morning.