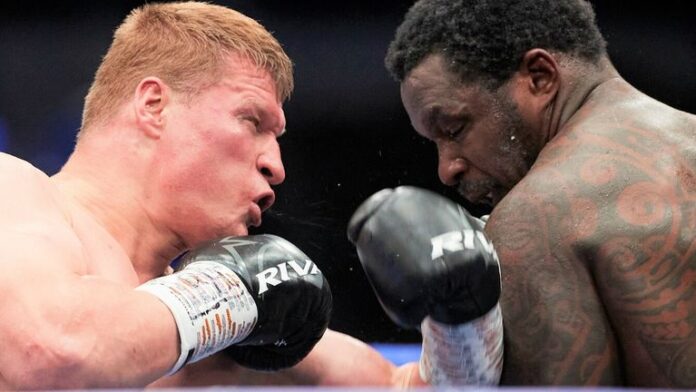 Dillian Whyte offered to step in and fight Tyson Fury; Derek Chisora wanted to face Whyte at two weeks’ notice but Whyte will wait for his postponed rematch with Alexander Povetkin on January 30 because Fury is close to agreeing a fight against Agit Kabayel on December 5

Dillian Whyte will wait to fight Alexander Povetkin next year because Tyson Fury has lined up Agit Kabayel as his next opponent.

Whyte was offered up by his promoter Eddie Hearn to step in as Fury’s challenger when his rematch with Povetkin was postponed.

Derek Chisora and his manager David Haye then offered to fight Whyte at just two weeks’ notice, and only three weeks after Chisora lost to Oleksandr Usyk.

Asked who Whyte’s next opponent would be, Hearn posted on social media: “If not Fury then Povetkin.”

Hearn then added: “The fight he wants more than anything is Povetkin because he has to rectify that defeat. There was one other fight he would take, and that was Fury on December 5. I’m not sure we expect that to happen.

“Realistically we will postpone the fight with Povetkin to January 30.”

And Fury is set to finalise his first WBC title defence at London’s Royal Albert Hall on December 5 against Kabayel, his UK-based promoter Frank Warren told talkSPORT this week.

So Whyte, rather than oblige Chisora, will wait to face Povetkin in a rematch – they had been due to fight again on November 21 but Povetkin has been hospitalised with Covid-19.

Whyte must avenge a knockout defeat to Povetkin to regain the status as mandatory challenger to Fury’s WBC title.

Chisora said “I would take the fight” but Whyte hit back: “You are not ready.”

The date would be three weeks after Chisora shared 12 rounds with Usyk.

Whyte has twice beaten Chisora, via split decision then knockout, but their rivalry has not dissipated.

“I think it’s a great fight. Dillian said he’s the ‘can man’.

“‘Anyone who wants it can get it!’

“We’ve heard him say he would fight anyone but everyone is running from him. Well, we’ve got someone here! What are you going to do?

“Derek is 36. Opportunities like this to avenge a loss? He knows Whyte isn’t going to give him 12 weeks for a rematch.

“He knows that he’s better than Whyte. He reviewed their last fight – unfortunately he got scrappy and desperate after getting points deducted. He knows that he underperformed.

“Now he’s significantly fitter, his punch volume is better, his defence is better.

“On two weeks’ notice he would put forth a significantly better effort than he did in their second fight.

“Derek might be 85 or 90 per cent but that is more than enough to beat Whyte.”

What are Fury’s plans?

A contracted trilogy fight with Deontay Wilder was shelved because Fury claimed his rival wanted it pushed back into 2021.

Fury is instead expected to fight in the UK for the first time in over two years against Kabayel, an undefeated German.

That decision prompted Wilder to break his silence and say: “It is time for you to be a man and honour your agreement.

“You know I was offered more money to fight Joshua than I was getting to fight you. Again being a man of my word, I fought you like I said I would.

“When time goes by, naturally the truth will always reveal itself…”

IBF, WBA and WBO heavyweight champion Anthony Joshua reacted to Wilder’s outburst: “When time goes by, naturally the truth will always reveal itself.

“He admitted it. We made him a lucrative offer but he wanted to face Fury.

“But he dragged my name through the mud.”