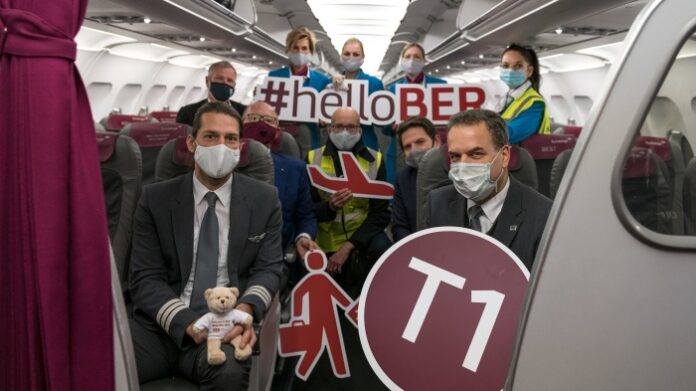 Eurowings has taken off from the new Berlin Brandenburg Airport for the first time.

The inaugural departure left for Cologne, closely followed by flight EW8000 to Stuttgart.

The news makes Eurowings the first airline in the Lufthansa Group to operate scheduled flights from the new capital city airport.

In domestic traffic, Eurowings currently connects the destinations Cologne, Düsseldorf and Stuttgart with the capital at least three times a day – on many days even more frequently.

Despite a reduced flight schedule as a result of Covid-19, the airline is focusing on the off-peak hours, which are popular with travellers.

The domestic German program is supplemented by weekly flights to the Canary Islands and the Greek Islands.

“In terms of culture and history, there is hardly a more exciting European city than Berlin.

“The new Berlin Brandenburg will further increase Berlin’s attractiveness, becoming the entrance and exit gate to a cool, modern metropolis.

“And no other airline in Germany flies more tourists to Berlin than Eurowings.

“That’s why we will be expanding here in the future,” said Jens Bischof, Eurowings chief executive.

Aircraft from Eurowings will be positioned at the Pier North of the new capital city airport.

Passengers will benefit from short distances, boarding without bus transfers and a direct building connection to the Lufthansa Lounge.