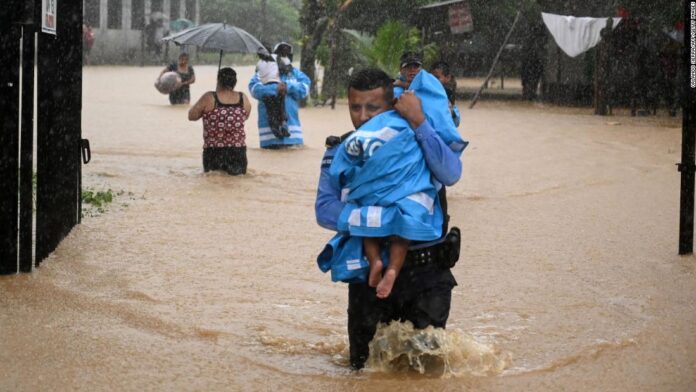 Eta might have weakened to 35 mph winds, but the lingering tropical depression is still forecast to dump more than 3 feet of rain in some areas.
An additional 30 inches of rainfall is still possible for parts of Honduras, Guatemala and Belize, and El Salvador, Nicaragua, Costa Rica and southeastern Mexico could see another 20 inches in some areas.
Eta made landfall along the coast of Nicaragua as a Category 4 hurricane Tuesday afternoon, devastating the region. At least one death was reported, and more than 2,000 people were evacuated in Honduras, the country’s Permanent Contingency Commission said on Wednesday. The storm destroyed five bridges, 14 roads and 339 homes, the commission reported.
The storm weakened quickly, dropping to a tropical depression by Wednesday evening. And it is expected to dwindle further through Thursday night until its remnants cross into the Gulf of Honduras and travel toward the Caribbean Sea, according to CNN meteorologist Derek Van Dam.
There, Eta is expected to strengthen back into a tropical storm before it is forecast to cross into western Cuba Saturday night and then into the Straits of Florida by Sunday afternoon, according to the National Hurricane Center.
There is still a lot of uncertainty about the strength with which Eta will reach the US coast, but it is likely to continue to bring heavy rain, life-threatening flash flooding, river flooding and landslides, Van Dam said.
Southern Florida is already saturated from an active 2020 Atlantic hurricane season, which has tied with 2005 for the record number of named storms in a single season.