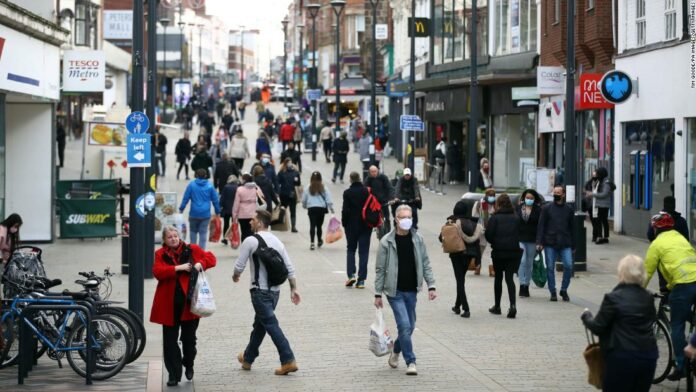 The restrictions, which took effect at midnight Thursday, will see restaurants, bars and non-essential businesses close until December 2.
England’s lockdown came days after similar measures were enacted in France and Germany, and ahead of a number of Italian regions becoming “red zones” on Friday.
Speaking before the parliamentary vote Wednesday which paved the way for the new lockdown, UK Prime Minister Boris Johnson said he had been “confronted” with data projecting that the UK’s National Health Service (NHS) could “collapse” in the face of increased demand because of Covid-19.
Johnson said deaths in the second wave of the pandemic could potentially exceed those recorded in the spring, with the number of coronavirus patients in some hospitals “already higher than at the peak of the first wave.”
“And when I look at what is happening now amongst some of our continental friends, and see doctors who have tested positive being ordered, alas, to work on Covid wards, and patients airlifted to hospitals in some other countries simply to make space, I can reach only one conclusion: I am not prepared to take the risk with the lives of the British people,” Johnson said.
The UK reported its second-largest daily increase in cases on Wednesday with 25,177 new infections recorded in 24 hours. There were a further 492 deaths, according to government data, and the number of patients in hospital with Covid-19 rose to 12,320.
It came after Europe recorded a 22% increase in new coronavirus cases and a 43% increase in deaths in the seven days to Tuesday, compared with the previous week, according to the World Health Organization.
France, Italy and the UK reported the highest numbers of new cases in that time, although Andorra, the Czech Republic and Belgium reported the highest per population incidence.
“France accounted for the third-highest number of new cases globally, with over 275,000 cases reported in the past week … that is a 27% increase from the previous week,” WHO said.
While cases in France rose in line with much of Europe from August onwards, the country saw a significant surge in infections in October, and the number of Covid-19 patients in intensive care units was “rising rapidly,” the report said.
France reported 854 Covid-19-related deaths in 24 hours on Tuesday — an average of one person dying every 1 minute 41 seconds — and the nation’s highest daily tally since April 15, according to data released by the French Health Authority.

Sending in the military

The second wave of the Covid-19 pandemic is already putting hospitals in several European countries under severe strain.
Intensive care units in the Belgian capital, Brussels, reached maximum capacity on Monday, and military personnel have been deployed to a new emergency unit to help relieve congestion in hospitals in the Liège region of the country.
A record 877 Covid-19 patients have been admitted to Belgian hospitals in the past 24 hours, according to national health authority Sciensano. The largest number of admissions in the first wave of the pandemic was 629, on March 28.
Switzerland is also deploying its army to help manage a growing number of Covid-19 hospitalizations, the Swiss government said on Wednesday.
The government said 2,500 soldiers would be available to help hospitals treat or transport coronavirus patients in areas where local resources have been “exhausted.”
Switzerland and Liechtenstein registered 10,073 new daily Covid-19 cases, 247 hospitalizations and 73 new deaths on Wednesday.

Italy’s government, which has warned it could run out of intensive care beds by the end of November, has approved measures including a 10 p.m. to 5 a.m. curfew, and a new “traffic light” system of regional restrictions.
Public transport will travel at 50% capacity; museums will close; all students aged six or over must wear masks; and restaurants and bars must close at 6 p.m.
In “orange zones,” people will be barred from leaving the region except for work or health reasons, and bars and restaurants close except for delivery and takeout. In “red zones,” people will not be allowed to leave their town and all non-essential stores will close. The new rules will be in effect from Thursday until December 3.
The regions of Calabria, Lombardy, Piedmont and Valle d’Aosta will become “red zones” from Friday, Italian Prime Minister Giuseppe Conte announced on Wednesday. The region of Puglia and the island of Sicily will become “orange zones.”
Poland’s Prime Minister Mateusz Morawiecki announced further restrictions from Saturday, including remote learning for younger children, cultural institutions closing, stores reducing capacity and hotels only opening for business trips.
“A step beyond the measures that we are announcing today is only a national quarantine, that is, a total lockdown,” said Morawiecki.
Poland recorded a record rise of almost 25,000 coronavirus infections and 373 deaths Wednesday.
Austria recorded 6,211 new Covid-19 infections on Wednesday, the first time the daily tally has topped 6,000, according to the interior ministry. It came a day after the country entered its second national lockdown, with leisure and culture facilities closed and a 8 p.m. to 6 a.m. curfew in place.
Austria has reported 125,792 coronavirus cases in total and 1,277 deaths, according to the health ministry.
Greece’s Prime Minister is expected to announce further restrictions on Thursday after the country registered a record 2,646 daily Covid-19 cases, according to the country’s National Public Health Organization, taking the total to 46,892 cases; there were a further 18 deaths, taking the total to 673.
Greek media outlets suggest that a national lockdown is being considered. Government spokesman Stelios Petsas said earlier this week that it could not be ruled out, judging from the situation across Europe.
Hungary has reported a new daily record, with 4,219 cases and 90 deaths recorded in the past 24 hours.
Prime Minister Viktor Orban said in a Facebook video on Tuesday that the country was reintroducing its state of emergency, allowing the government to rule by decree for 90 days from midnight. This will involve a midnight to 5 a.m. curfew, mask-wearing at venues and nightclub closures.
He warned hospitals could exhaust their capacities by mid-December if the current trend continues.
Even Sweden is tightening restrictions. Prime Minister Stefan Löfven announced on his Facebook page that no more than eight people would be allowed to share tables at restaurants or bars.
He is also enforcing measures in more regions, meaning “seven out of ten Swedes are covered by the stricter recommendations.”
Measures include asking people to avoid physical contact, busy indoor environments and gatherings; employees are being encouraged to work from home where possible.
“It is important that everyone understands the seriousness now. None of us has forgotten what spring looked like,” Löfven said.