Home World Parrots Live in New York City. Here’s How They Make It in... 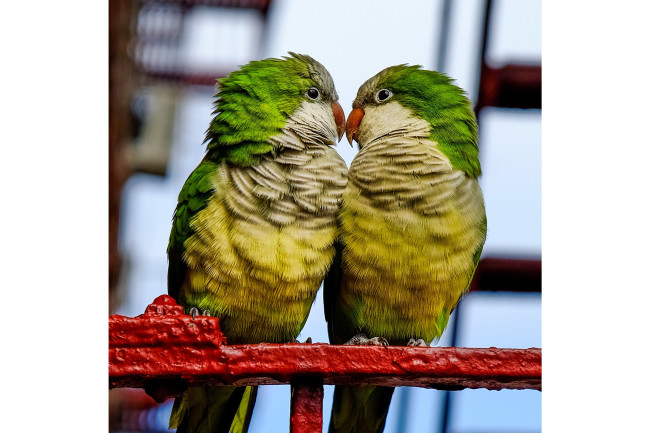 Wildlife in New York City tends to be headline news. Whether it is the inspiring return of humpback whales to the Hudson River, the resiliency of peregrine falcons in skyscraper nests, or the shameless determination of pizza rat, it is these animals’ admirable ability to coexist with humans and their scarcity that draws our attention and our empathy. Yet, unbeknownst to even most New Yorkers, another animal has invaded the city with surprising results. Some call them Quaker parrots, while others know them as monk parakeets. Unlike the city’s pigeons and raccoons, these birds are a long way from home.

Monk parakeets originally come from the temperate and subtropical regions of Argentina, Brazil and Uruguay. They’re bowling pin-sized and shine a vibrant green, with a pale chest, crown and forehead that renders them nature’s incarnation of a punk-rock monk. In recent decades, their presence in New York has caused problems when their elaborate nests built on electrical equipment cause power outages. But there’s little risk of these intelligent and resourceful birds taking over the city. Utility companies deploy special teams to keep equipment bird free, and the parrots have become a largely welcomed addition to New York’s wildlife scene.

The details surrounding the birds’ arrival to the U.S. have become a thing of urban legend. During the 1960s, workers at JFK International Airport reported that the parrots — then products of the pet trade — escaped from broken shipping crates unattended in the cargo area. Others say the birds absconded from their homes or were intentionally released by their owners, some of whom may have been unprepared to deal with the birds’ screeching calls. Either way, the birds have now infiltrated all five boroughs in New York, including Staten Island within the last five years. They’ve also expanded into the lower Hudson Valley and major cities around the U.S.

Monk parakeets employ several skills that allow them to thrive in their big-city abodes. They’re community-oriented and develop vocal dialects to communicate with each other. They also groom one another to show their friendship and settle disagreements by meeting conflict head-on. Rather than nest in tree cavities, they are the only parrot species to build giant communal stick nests, like labyrinthine castles, that insulate multiple families. Even though building the nest is a group effort, each family has their own private entrance (which is nothing to scoff at in terms of city housing). Youngsters contribute by helping their parents take care of their siblings and maintain the nest.

Each bird is born knowing how to build a nest, although this skill is fine-tuned with age and experience. The birds use their limber feet to meticulously craft these free-standing nests in between tree forks, interwoven among electrical transformers, and atop stadium lights and utility poles. Nest structures can grow to the size of a refrigerator, housing up to 200 pairs of birds, and have been known to survive a fall to the ground unscathed. The same may not be true for anything crushed underneath, given that each nest can weigh more than a ton. Nests constructed near electrical structures leach warmth from the equipment, allowing the birds to stay snug throughout the winter. 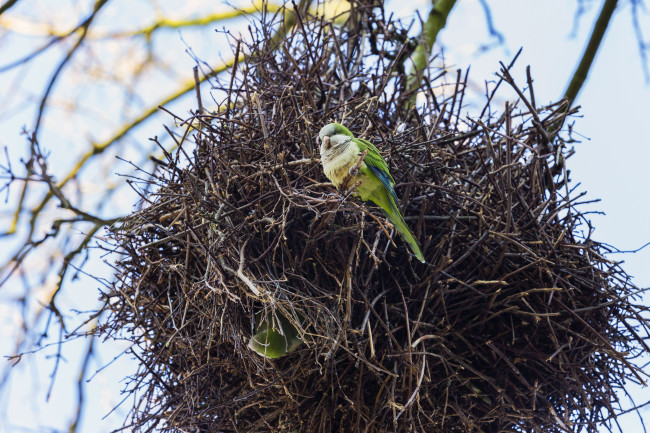 Unfortunately, the parrots’ affinity for building these flammable fortresses on utility equipment can result in their homes going ablaze, taking down the electrical network. Con Edison, New York City’s energy services company, realized about 14 years ago that these nests were behind a series of power outages in Brooklyn. The company partners with wildlife specialists to carefully remove nests from dangerous areas before they become a safety hazard.

Nest removal is a delicate operation, according to Ronnie Gandolfi at El Toro Pest Management Company, Con Ed’s Wildlife Management Control Contractor for over 30 years. First, Con Ed identifies growing nests in problem areas during the spring, before the breeding season, to preempt the need to remove eggs or young birds. Workers arrive on site in trucks, often at night when there are less cars and pedestrian traffic. Gandolfi then checks for birds as well as squirrels, since the rodents often move into empty nests and cause additional problems by chewing on electrical insulation. If there are baby squirrels, the nest is left undisturbed until they grow to adulthood and the nest can be removed. Any adult birds present will typically leave and build elsewhere, ideally in a more natural setting. Once the nest is determined to be empty, workers disassemble it into plastic bags to prevent the spread of dust, debris and disease.

Despite the challenges monk parakeets present for utility companies, they are one of the few invasive species stories with a fairly happy outcome. The parrots seem to pose no risk of overpopulating the neighborhood or outcompeting native species for food. A 2016 USDA report also noted they do not inflict crop damage in the U.S. like they do in South America. When they cannot find insects, birdseed or fruit from backyard gardens, the parrots feed opportunistically on pizza crust, like many other locals.

New York birdwatchers frequently tour Brooklyn’s Green-wood Cemetery or Brooklyn College to catch a glimpse of the parrots. They can also sometimes be spotted just past the eastern edge of JFK airport in the parking lot of North Woodmere Park, not far from where they likely first immigrated to the U.S. Here, locals pause to observe planes taking off and landing on the runway, hoping to also catch some in-flight entertainment performed by the birds. Against the pallid gray seen much of the year in New York City’s skies, a cameo from the tropics makes for an unexpected, but welcome, lime green pop of color.