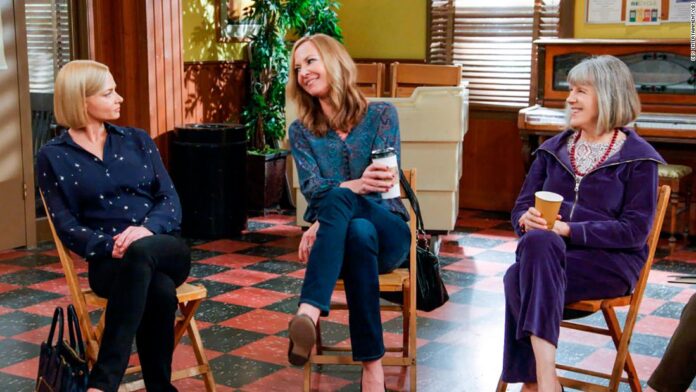 Without spoiling the premiere, airing Thursday on CBS, the path is carved for the character, who struggles with addiction, to have a happy and bright future, which star Allison Janney says was the kind of positive message they wanted to show viewers.
“We talked about how sometimes in recovery, your life can get bigger than you ever thought possible,” Janney told CNN via Zoom from the set of the show. “And I think that’s what happens for Christy.”
Jaime Pressly, who plays Jill, added: “It’s really important to (showrunner Gemma Baker) to portray a character that got sober and stayed sober, not somebody that fell apart and had to start all over again. I think that was really important.”
Faris and CBS announced back in September that the actress would be leaving the series ahead of its eighth season.
“The past seven years on ‘Mom’ have been some of the most fulfilling and rewarding of my career,” Faris said in her statement at the time. “I’m so thankful to (creator) Chuck (Lorre), the writers, and my amazing castmates for creating a truly wonderful work experience.”
On the show, Faris played Christy Plunkett, a single mom who, like her mother, Bonnie, struggled with addiction. Over the years, the show’s ensemble has expanded to include other characters who are recovering addicts and a love interest for Bonnie, played by William Fichtner.
Bonnie and husband Adam’s relationship will be further explored this season in wake of Christy’s departure, as will Bonnie’s complicated feelings about being an empty nester.
“Bonnie has trouble feeling abandoned. She has abandonment issues, so it does affect her greatly, and you’ll see throughout the show,” Janney said.
Kristen Johnston, who plays Tammy on the show, said, however, Christy continues to be “a presence on the show,” even if she’s not physically there. “It doesn’t feel that different,” Johnston said. “I mean, obviously I miss Anna, but it’s still just ‘Mom.'”