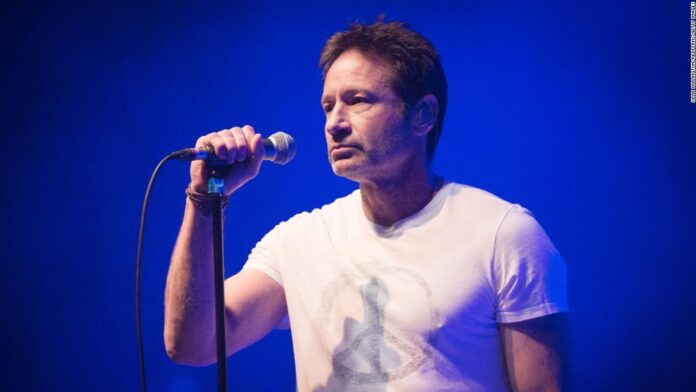 The actor/author/musician’s latest song, “Layin’ on the Tracks,” asks “Have you seen what it’s like/At the razor’s edge?” a line which feels like it was written to describe our latest election.
The song is political, but Duchovny isn’t a prophet. More so a person trying to process all that’s been happening in the world.
“It’s tricky because I’ve never really written a political song before. I just don’t,” he told CNN. “I just don’t think specifically like that.”
But with his new album being pushed back because of the pandemic he thought why not try and get the song out there before the election?
“That’s the first time I’ve ever tried to time something so that it spoke to a certain moment,” Duchovny said
The “Californication” star told CNN that he’s been trying to be as thoughtful as possible about the pandemic, social justice and the demonstrations this summer, expressing that can be “tricky” for him as a white man.
“I was like ‘I’m supposed to be listening right now,'” he said. “I was like, you know, maybe now is not the time for me to speak up, maybe it’s the time for me to listen. So I was kind of sitting in that place. Voicing my support, but not voicing, “Oh I’ve got the solution here.'”
Instead the actor, who has also written novels, decided to express himself through song about the presidential election because he said he felt he had to.
Duchovny has been making music for years and said he started with writing poetry when he was a kid and moved on to learning how to play guitar and writing songs.
He said he understands why some people don’t want to hear a celeb’s thoughts on politics, but said “nobody needs to keep their political opinions to themselves because it’s their opinion no matter what it is.”
“Being a celebrity doesn’t make you less than anymore than it makes you more than,” the “X-Files” star said. “I think there are two problems with celebs speaking up: one they’re not usually experts so they don’t have the wherewithal really to weigh in. And secondly, they might have more power than they should have. Everybody gets one vote.”
So does this mean we can expect more political songs from Duchovny?
“It’s just so not in my nature, so not in my wheelhouse as a writer,” he said. “But you know we change and I think that the events of the last year, the events of the last six months, have really forced so many of us to look at things that we didn’t look at for a long time. And therefore as I find myself looking at things that I haven’t looked at I think new words will come out of that.”