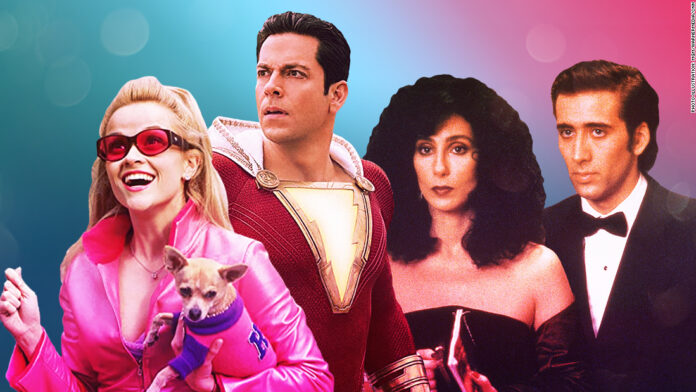 The world has felt even more doom-and-gloom this year, and what’s missing more than anything is a bit of fun.
Oh — and, at times, civility, peace and not feeling like the world is imploding.
More from Pop Life Chronicles
So, how about we all unplug for a bit?
Don’t call it a “guilty pleasure,” because you have zero to feel guilty about.
Instead, let’s call it what it is: feel-good content you can stream in the safety of your own home. For your consideration …
“Shazam!”: Zachary Levi won hearts years ago starring in the NBC series “Chuck.” In his latest role, he’s practically perfect as a superhero.
The best thing about this fun film is you don’t have to be a comic book geek to enjoy it.
“Shazam!” is now streaming on HBO Max (which is owned by CNN’s parent company).
“Legally Blonde”: Elle Woods is such a delicious treat.
Reese Witherspoon was so great in this comedy about a sorority girl who heads off to Harvard Law School that the 2001 film spurred movie sequels, a Broadway musical and a reality show.
The original film, based on a novel of the same title by Amanda Brown, is currently streaming on several services, including Showtime.
“Moonstruck”: Snap out of it!
There is a reason why Cher won the Academy Award for best actress in 1988 for her performance in this film. She was a delight starring as Loretta Castorini, a widow who falls for her fiancé’s younger and more passionate brother, played by Nicolas Cage.
If you are lucky, Cosmo’s moon might show up while you’re watching.
“Pitch Perfect”: I had to include at least one musical on this list.
Anna Kendrick and Rebel Wilson help lead the cast in this charming film set in the world of a cappella singing competitions.
The film is just sharp enough not to be cheesy and just sweet enough to avoid being overly cloying. Think of it as a cross between “Glee” and “Mean Girls.”
“Pitch Perfect” can be found on a few services, including Amazon Prime.
Those are just to get you started.
Craving even more? There is plenty more where all that came from in the monthly streaming gallery I write and my CNN colleague Marianne Garvey’s roundup of some stand-up specials to watch for a few laughs.
So, give yourself a break and decompress with some make-believe. You deserve it.

Three things to watch:
Get to know this artist.
Amazon Prime bills this documentary as “an intense and powerful journey inside the private and professional life of Tiziano Ferro, one of the most famous contemporary Italian singers.”
The doc takes viewers between Italy and the United States to witness Ferro’s successes and failures. It’s narrated by some of those closest to him who spill tea and share never-before-seen footage.
Ferro starts streaming Friday on Amazon Prime.
‘Young Sheldon’
Full disclosure: I’m friends with and a huge fan of Danielle Pinnock, who plays Ms. Ingram in this comedy series.
But even if I weren’t, I would still love this show. It tells the origin story of Sheldon Cooper, the lovable yet annoying scientist I first fell for on the sitcom “The Big Bang Theory.”
The spin-off starring Iain Armitage is equally funny. Season four starts streaming Friday on CBS All Access and the Apple TV app.
‘Roadkill’
If you aren’t watching “Roadkill” on PBS, you should be.
I love a good British drama. This one stars Hugh Laurie as a scheming UK government minister trying to navigate a pair of scandals.
My CNN colleague Brian Lowry called it “one of those classy British miniseries that looks right at home on PBS’ Masterpiece, even though it’s a contemporary story.”
New episodes of the miniseries air on Sundays through November 22 and are streaming on the PBS app.
Two things to listen to:
Of course, Kylie Minogue has a new album coming out titled “Disco.”
The Princess of Pop has become well known for her dance tunes, and her 15th studio album drops on Friday.
She told Idolator last year, “I think it’s going to be getting back on the dancefloor, like grown-up disco; that’s where I want it to be.”
That’s where we want to be, too, Kylie.
Likewise, Little Mix’s new album, “Confetti,” is sure to get you grooving.
Nothing beats a good synth-pop tune or a girl group, and this quartet of British singers is just one of the acts we can thank “The X Factor” for making famous.
The group’s sixth studio album is out Friday.
One thing to talk about:
The Kardashian/Jenner clan keeps reminding us that their lives are nothing like ours.
Kim Kardashian West’s 40th birthday party on a private island and her half sister Kendall Jenner’s 25th star-studded Halloween soiree are just two examples of how they are the embodiment of how different life can be when you are wealthy.
The famous family has always been a bit of a lightning rod. Reminding us that they can afford to live life like a global pandemic isn’t raging probably didn’t win them any fans — even though sister Khloe Kardashian and Kim’s husband, Kanye West, both have said they contracted the disease early on.
But that’s actually been part of the key to the family’s success. They are both aspirational to some and the reality stars you love to hate.
Clearly, it works for them.

No, we still haven’t reached the middle of November, but God bless Mariah Carey for giving us permission to already start playing Christmas tunes.
And yes, every year people complain that the holiday season starts earlier and earlier.
Just after Halloween, Carey posted a video on social media that showed a ghoul opening a door to reveal her in holiday pajamas, throwing fake snow.
“It’s time!” she says before the screen reads, “It’s time! (But let’s get through Thanksgiving first.)”
Cue me playing Carey’s perennial hit, “All I Want for Christmas Is You.”
Look, as far as I am concerned, we can’t get this year over with quickly enough, so go ahead and play the music, drink the hot chocolate and do whatever else helps to give you that warm holiday feeling.
Pop back here next Thursday for all the latest entertainment happenings that matter.