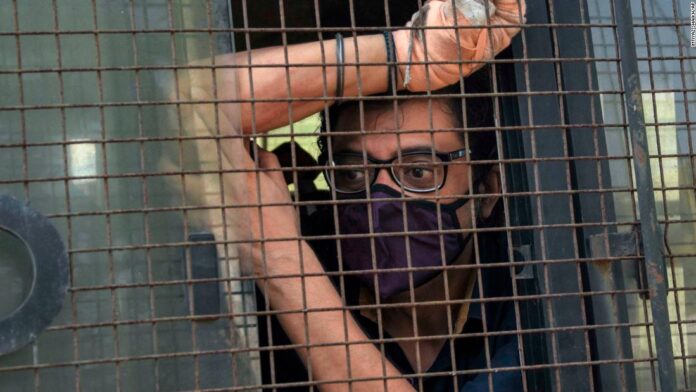 Arnab Goswami, the face and founder of right-wing broadcaster Republic TV, was arrested at his home in Mumbai in the western Indian state of Maharashtra Wednesday for his alleged role in the death of Anvay Naik, who died by suicide in 2018, according to a statement Wednesday from the broadcaster.
Ashok Dudhe, superintendent of police of Raigad district in the western state of Maharashtra, confirmed that Goswami was arrested for allegedly abetting a suicide, a crime that under the Indian penal code carries a possible 10 year prison sentence in India. Goswami and two others were remanded to judicial custody late Wednesday night, according to a court order.
In a video posted online in May and shared widely by Indian social media users, Naik’s wife Akshata Naik alleged that Goswami aided Naik’s suicide by failing to pay Naik for designing his television studio. Naik’s suicide note — which CNN has independently verified with Naik’s daughter — claimed that Goswami and two other people owed him $726,000.
But Goswami and Republic TV deny those allegations, saying in a statement Wednesday that 90% of the money was paid to Naik’s company over two years ago. The official court document on the case does not specify whether the money was paid before or after his death.
According to Goswami’s statement, police previously investigated him for his alleged role in the suicide, but the case was closed in April last year after police found “no proof of any illegality.”
Instead, Republic TV said that the pro-government anchor’s arrest was made “as part of a larger vindictive exercise against an independent journalist and an independent news organization” and claim it was an “attack on the fourth estate.”
That sentiment has been reinforced by members of Indian Prime Minister Narendra Modi’s ruling Bharatiya Janata Party (BJP), but state politicians deny that the arrest is political.
According to a court order, investigations resumed after a fresh complaint from Naik’s wife. Following that, more evidence emerged in the case against Goswami.
CNN has contacted the Mumbai Crime Branch but has not received a comment. The Raigad police confirmed Goswami’s arrest but has not shared further details of the investigation.

Is Goswami’s arrest an attack on press freedom?

When Naik died in 2018, Maharashtra was governed by the BJP.
But in last year’s legislative assembly elections, Maharashtra voted against the BJP, instead installing a more liberal coalition government of Shiv Sena, Indian Congress, and the Nationalist Congress Party.
In the following months, Goswami and Republic TV have become outspoken critics of the state’s more left-leaning leaders, while boosting support for the BJP. In their statement Wednesday, the channel argued that the arrest was “revenge” for his coverage.
But Maharashtra officials have denied that accusation.
When asked whether Goswami had been arrested due to his negative comments about the Maharashtra government, the state’s Home Minister Anil Deshmukh — who is a member of the Nationalist Congress Party — told reporters that the investigation was in keeping with law and order.
“Nobody is above the law,” he told reporters Wednesday.
Sanjay Raut, a Maharashtra lawmaker from the Shiv Sena Party, one of the parties governing the state, told local media: “Police can take action if they have evidence against anyone … Since the formation of (last year’s state government), no action has been taken against anyone for revenge.”
In their statement Wednesday, Goswami and Republic TV said: “It is shocking that a case that was decisively closed has been reopened with the sole purpose of misusing power, concocting facts and forcefully arresting Arnab Goswami in a prima facie act of revenge and vengeance for his news coverage which questioned those in power in the state of Maharashtra.”
Goswami’s arrest has also prompted an outpouring of anger from senior figures within the BJP, who are outraged over his arrest.
Indian Home Minister Amit Shah called the arrest an “attack on free press.”
“Congress and its allies have shamed democracy once again,” he said. “Blatant misuse of state power against Republic TV & Arnab Goswami is an attack on individual freedom and the 4th pillar of democracy … This attack on free press must be and will be opposed.”
CNN has reached out to Raut and Deshmukh for comment.

What’s the background to the case?

For months, Goswami had been using his platform to slam the Maharashtra authorities for not doing more to investigate another high-profile death described by police as suicide.
In June, Sushant Singh Rajput was found dead in his flat in Mumbai. The case transfixed the Indian public and dominated headlines for months, even as India’s coronavirus cases soared to make the country one of the worst affected in the world.
Following his death, Rajput’s father KK Singh filed a police complaint in Bihar, the Indian state he lives in, accusing Rajput’s actress girlfriend Rhea Chakraborty of stealing money from her boyfriend’s bank account and abetting his suspected suicide. That investigation led to a wider probe into drug use in Bollywood and to the arrest of Chakraborty on drug charges, although Chakraborty was released on bail last month.
Goswami is among a number of political leaders and media commentators who have pushed the narrative that Rajput’s death was actually a murder, despite authorities finding that it was a suicide.
Republic TV slammed Mumbai Police’s handling of Rajput’s death and argued that Bollywood was covering up crimes including murder and drug abuse.
Last month, four Bollywood industry associations and 34 leading Bollywood producers filed a civil suit against two media companies — including Goswami’s Republic TV — asking them to refrain from conducting trials by media of Bollywood personalities and from making irresponsible and defamatory remarks, according to DMK Legal, the firm representing the production companies.
BJP politicians used Rajput’s death to campaign in Bihar, where Rajput’s family are from. Rajput’s face and the hashtag “#JusticeForSushant” were used on campaign posters for the state’s legislative assembly elections, which are currently underway.
Candidates have been accused of using Rajput’s death to score political points against their opponents and distract attention from the BJP’s handling of the pandemic.